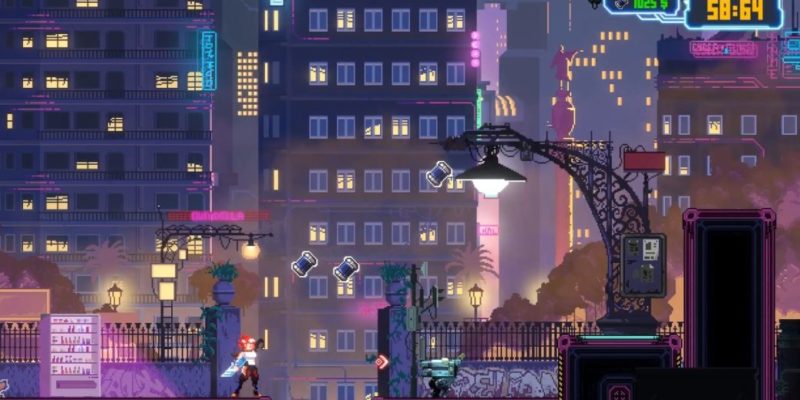 2Awesome Studio has just revealed its second game, Aeon Drive, with a trailer that also announces an upcoming alpha test.

In Aeon Drive, players will continue the story of interstellar pilot Jackelyne (Jack for short) that began in 2Awesome Studio’s first game, Dimension Drive. This time around, you’ll ditch your spaceship to explore the streets of a cyberpunk version of Barcelona. The fabric of the universe is under threat and it’s up to you to collect faulty pieces of dimension-bending machinery to save it.

As you race through this speed-running action platformer, you’ll have to overcome obstacles using your sword, a teleportation dagger, and Jack’s unique ability to manipulate time. Not a bad arsenal to have at your disposal. Check out some gameplay for Aeon Drive in the alpha reveal trailer below.

2Awesome Studio prides itself on bringing innovative mechanics to its games. Dimension Drive was a shoot ‘em up that featured teleporting and simultaneous dual-screen gameplay. With Aeon Drive, 2Awesome didn’t want to follow the usual platformer mechanic where players try, die, and repeat. So, instead, it is experimenting with a time-warping system that will let players adjust the game’s difficulty on the fly.

If a level is proving too challenging or you’re a few seconds short of time, you can use time-warping crystals to give yourself the precious seconds you need to reach the end. However, if you run out of time-warping crystals, you’ll be on your own. So, you need to be strategic about when you use this precious time-altering resource. The system is designed to reduce frustration and repetition, but keep the gameplay challenging and fresh.

There is no release date for the game just yet, but 2Awesome Studio says it will be sometime in summer. For now, you can head over to the Aeon Drive website to sign up for the PC alpha, which is said to be coming soon. You’ll need to sign up with your email address and join the Aeon Drive discord server.