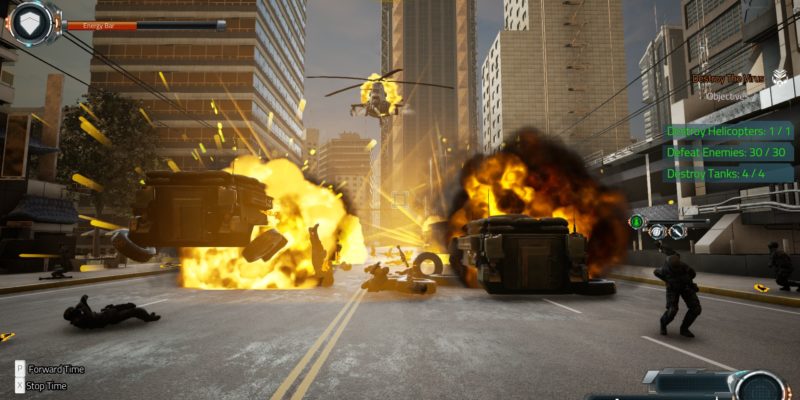 Yes, it’s called Time to Stop Time. If you read that title and think, “What’s that about?” then I implore you to think about it for a few seconds. To be blunt, the game is stupid. It uses some pre-made assets. It was made by two people. It’s also too easy most of the time. But y’know what? I don’t care. Because it doesn’t take itself seriously in the least, and it’s unique and a lot of fun. If you like low-budget jankiness and the appeal of devs just doing their best to make things overblown and ridiculous, I recommend this game. It’s just the kind of stupid I needed this month.

Time to Stop Time tells the story of an agent named Jack Alder. Jack is a time traveler who’s fighting to stop time-traveling Nazis from releasing a virus that dooms humanity. Some of these time-traveling Nazis have lightsabers. Some of those lightsabers are actually projectile weapons. There’s a surprising amount of plot in the game. And by “surprising” I don’t mean that there’s a lot of it, but there’s more effort than you’d expect from what I just told you. Cutscenes are fully voiced and told via static drawings where the camera moves around strangely. The voice acting isn’t very good but that’s a plus here, innit? Sometimes Jack goes to Europe in the year 1300 to meet a disembodied being that writes words on the wall of a 19th-century house in a generic font. On at least one occasion, one of those words was misspelled. Why is that house there? Who cares?

The game has 40 missions, some of which are just you going to that aforementioned house. But most of them are action-puzzle stages. In case you didn’t take my subtle hint in the first paragraph to heart, Time to Stop Time is a game about stopping time. Did you figure it out? Congratulations! The game wastes no time in demonstrating what kind of broken powers Jack has at his disposal. He walks onto the roof of a building and his goal is to kill all the enemies and save the hostages. As he exits a door, enemies turn and shoot at him. And then guess what happens next. No. Guess. I’ll wait. If your answer was, “He stops time,” then you get a cookie. Plain sugar, no chocolate chips. You’re welcome.

All non-time traveling enemies stay frozen for the duration of the levels. The flow for the early levels in Time to Stop Time is that you walk up to enemies, grab the rifles out of their hands, and then shoot them in the fucking head. Initially, you can only fire a single bullet out of any gun as TIME IS FROZEN, DUH. But Jack gains new abilities as you complete levels, including the time bubble that lets him use all the ammo in a gun’s clip. This lets you grab a gun, shoot one dude in the head, go to the next dude, shoot him in the head, and then, that’s right, you kick the next dude off a building. Didn’t see that one coming, did ya? Jack kicks people. That’s how he rolls.

You can also take grenades and knives off of enemies and use them. Levels in Time to Stop Time are all focused on using the available resources to complete your objectives by any means necessary within a time limit. There are a few levels where you rescue hostages who are often moments away from death. Even though normal enemies can’t move, fired bullets and rockets still do. Luckily you can grab them out of the air and throw them at whoever you want. For hostages, you can simply pick them up and move them out of harm’s way. 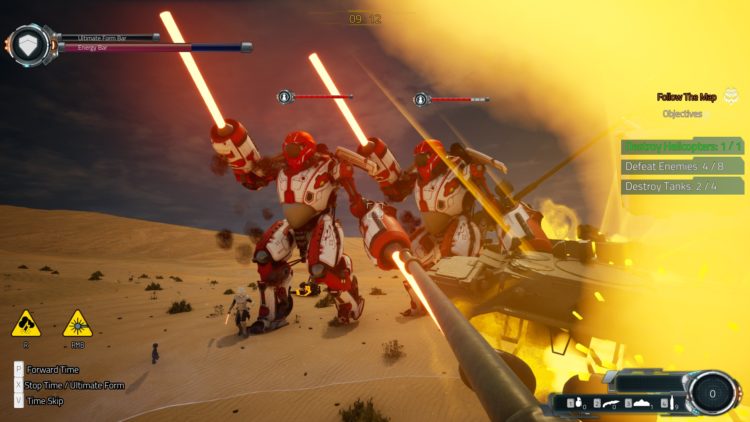 It doesn’t take long before Time to Stop Time starts throwing tanks and helicopters at you as well. You can enter these and shoot wherever you want to try and kill everything as dead as possible within the time limit. Then there are the other time-traveling enemies that can move within your time field. Jack has a double time stop power, though, so you can freeze them too. How does this work? Beats me.

This uses your energy bar, just as Jack’s other time abilities do. These include the time skip ability that lets you speed up time just long enough for a bullet or grenade to hit its mark. The time-traveling enemies take a hell of a lot of damage, so you’ll need to put some serious hurt on them to put them down. I prefer to start with a minigun and shoot dudes in the face until I can’t anymore.

They’re fairly threatening at first, but they become more manageable once you get used to them. Partway through Time to Stop Time the game gets a lot easier because you gain access to Jack’s ultimate form. Normally, I’d say that this was a bad choice that messes with the game’s balance but I don’t care because it’s too ridiculous to not have fun in spite of it. Jack’s hair turns gold and he can throw extremely rapid-fire punches and bunches of knives. But for big groups, you’ll want to summon meteors or drop entire steam rollers out of the sky. Yes, that’s a JoJo reference. The game even calls it a “road roller,” although certain people might be disappointed that it’s not spelled “RODO RORRAAAAA.” You thought this was a game review, but it was me; Dio.

The game is undoubtedly janky and unpolished, sure. But it’s fun. You can move enemy soldiers into a tight formation and throw an explosive barrel at them. At one point, you stop the Kennedy assassination. Kennedy looks nothing like the real person. The last mission is a final boss battle against four enemies that is far too easy to be the last battle, but sometimes being grossly overpowered is its own reward. Time to Stop Time won’t win any awards and won’t impress anyone with its visuals. But its unabashed stupidity and commitment to pure ridiculousness make it worth playing if the concept intrigues you. Which it should. It’s short, at only about 6 hours long, but it’s also $15 and the devs are planning to add a custom mode that lets you make your own levels and share them. I’m going to spawn as many dudes as I can and knock them off buildings with explosive barrels, and you can’t stop me. 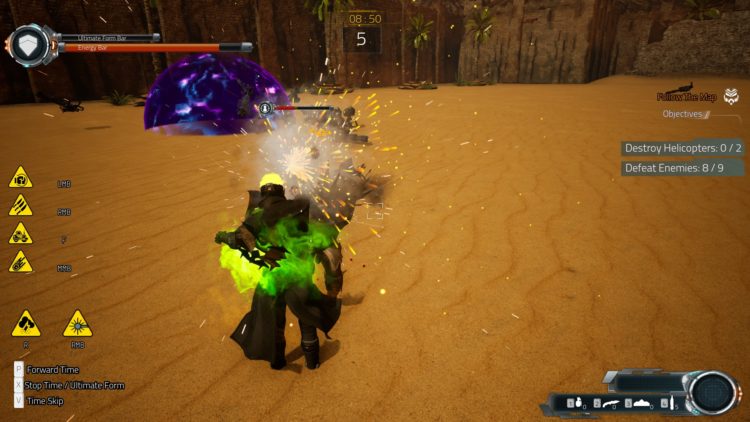 It uses some pre-made assets, has unbalanced difficulty, and it's completely ridiculous, but Time to Stop Time is a lot of fun.

Superliminal changes to a Steamier perspective