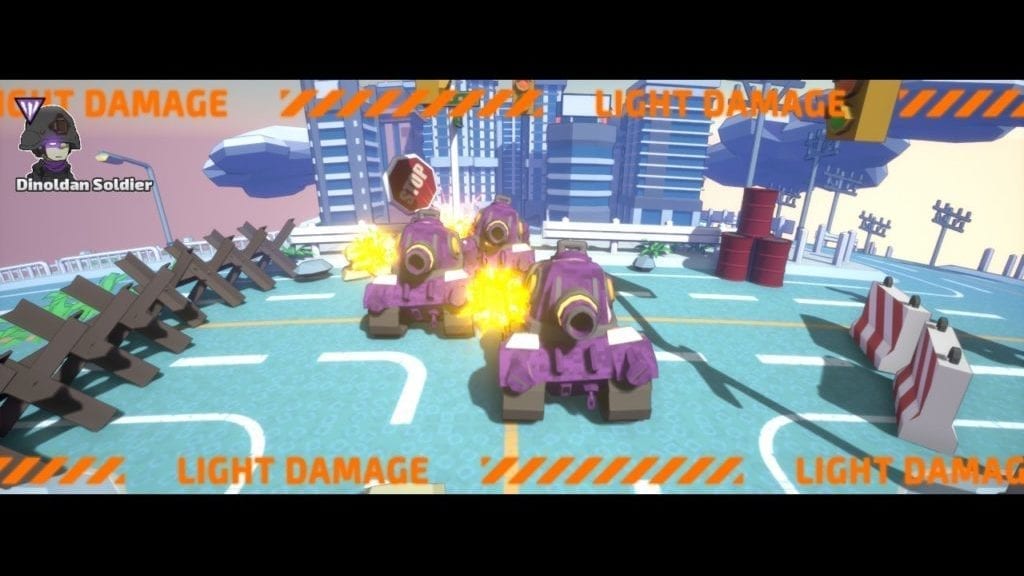 Franchises like Valkyria Chronicles and Advance Wars show that Japanese strategy games have a distinct style. Where Western developers favor realism, Japanese studios tend to aim for something more lighthearted. Tiny Metal: Full Metal Rumble is no exception. With its cartoony look, oversized tanks, eager soldiers, and overall campy sense of style, it’s hard not to see the lighthearted anime influences shine through.

Full Metal Rumble is a sequel to 2017’s Tiny Metal, and with this latest outing, it’s clear that the series has left its mark on the turn-based strategy genre. 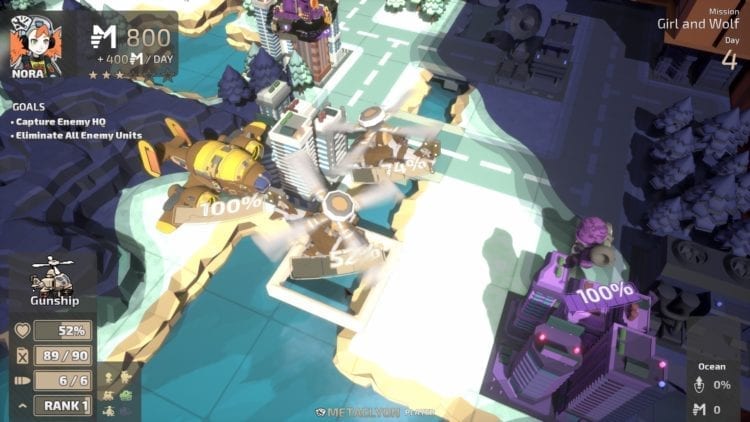 The Kingdom of Artemisia is at war with the Dinoldans, a war that has been waged for some time. During this conflict, the player takes control of a variety of commanders. Nathan Gries, who made an appearance in the first game, is now aligned with Tsukomo. The two had formerly fought against one another, but they have since made reparations and are aligned to fight the war against the Dinoldans. You will also take control of Wolfram, leader of the “White Fangs” mercenary group.

As a turn-based strategy game, the player moves troops over tiles across the battlefield. This grid formation is integral to the gameplay, because the placement of your troops is vitally important to taking down the enemy. During the player’s turn, you choose the movement and the action of each individual troop, one by one. If you have no other moves you wish to make, you can end your turn in the pause menu.

The campaign itself is fairly robust. Boasting 39 missions, there is a lot of time to sink into this game. At first, the missions retain a sense of brevity, but as the game progresses, the difficulty certainly increases. A lot of my time spent playing Full Metal Rumble was in replaying missions to learn from my mistakes. For a strategy game of this sort, that is exactly what I expected.

On top of the campaign, there are 77 skirmish maps that you can unlock via in-game currency. These battles are shorter, briefer segments and aren’t related to the actual story. There is also a PvP versus mode, but unfortunately, I was unable to link up with anyone in the lobby.

The variety of troops is immense, and their skills are equally as varying. You have everything from riflemen to lancers, who can take over cities, thereby allowing you more cash per turn. As for armored vehicles, the game features scouts, heavy metals, and vipers, all of whom are key to defending your troops against enemy armor. Later on, you gain access to aerial vehicles and must make use of a supply plane to help re-arm your troops. 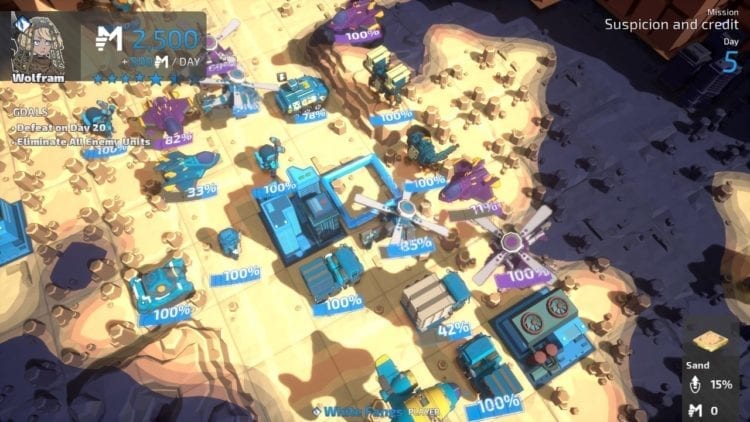 Do what the enemy does, and be aggressive

At times, I was surprised by the enemy’s aggression. I would spend my turn carefully planning my attack, while the enemies would descend on me as fast as possible. This often forced me to rethink my troop placement. That said, once you have the map figured out, the difficulty goes down drastically. But to begin with, this game will challenge you and force you to replay maps over again.

In this game, the best defense is a good offense. Since you spawn new ground troops at factories (and airborne troops at airports), the faster I occupied the enemies’ factories, the better off I was. This tactic put me in an excellent defensive position, allowing me to spawn more troops per turn. On top of that, the troops I did spawn were closer to the enemy. This often tipped the balance in my favor, forcing the enemy into a corner and ultimately opening up their headquarters for a checkmate.

Early on, I learned that the best strategy is surrounding the enemy troops. Trying to fight them head-on almost always resulted in failure. However, the game offers a “lock-on” feature. If you position one troop next to an enemy, choosing “lock-on” will allow you to pause the attack until you position another troop on the other side of that enemy. This tactic is known as “focus-fire,” and it lets you use a larger number of troops to double up on your attacks. I found this highly effective, both early on and throughout the entirety of the game.

It is vitally important to discover the location of the enemy factories. At some points, I found myself evenly squared away in a stalemate against the computer. The only way to end it was to figure out where the enemy was deploying from. Since the battlefield remains dark in places that the player hasn’t explored, it’s impossible to find the enemy factories without using your scouts to push forward.

The troop icons actually represent an entire platoon. For instance, one “rifleman” is actually a grouping of several. A short cutscene will display the shootout, showing how many of your troops perish. Thankfully, you have the option to turn off the shootout cutscenes in the menu. This will drastically reduce the game time, if you so wish. Along with this option, you also have some choices that allow you to speed up or slow down the game. If you want to actually watch your troops walk across the tiles, you can. Or you can set it so that the troops move instantly, helping the battles to go by more quickly.

As for keyboard controls, the game offers two options. You can either use the mouse or the WASD keys to move across the screen. I found the mouse to be somewhat cumbersome, mainly because all of the movement takes place from tile to tile. So instead of scrolling smoothly when I moved the mouse, the camera would jump from tile to tile across the screen. This sort of jumping around proved somewhat jarring. So instead, I found that using the WASD keys to scroll through the tiles, then selecting/deselecting with enter/backspace respectively, was the most comfortable way to control the game. Using a gamepad is also an option. As of the writing of this, there is no option to re-map the keyboard controls. 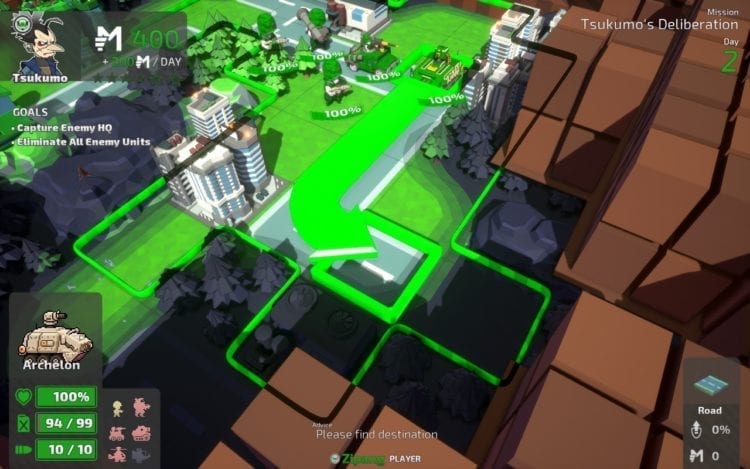 Tiny Metal: Full Metal Rumble wears its sense of humor proudly. The game has an irresistible nature about it, something that is prominent in everything from the art design to the voiceovers. The basic soldiers have their large, oversized helmets covering their eyes. When they report to the commander, they have the enthusiasm of a soldier from your favorite Saturday morning cartoon.

The early missions are brief, but as the game progresses, the difficulty increases immensely. I found that learning from my mistakes early on was the key to success. Tile placement is everything in this game, and the best way to learn this is to carefully consider your options during each turn.

I felt a serious sense of adrenaline while playing Full Metal Rumble. This game has moments where you find yourself fighting on multiple fronts. Once it becomes clear that the enemy is spawning troops from different points on the map, you must, if you hope to stay afloat, find a way to divert a set amount of troops to each of those areas. If not, you’ll find yourself spread thin, and the enemy will find their way past your defenses.

Valve opens up their experiments to the public with Steam Labs