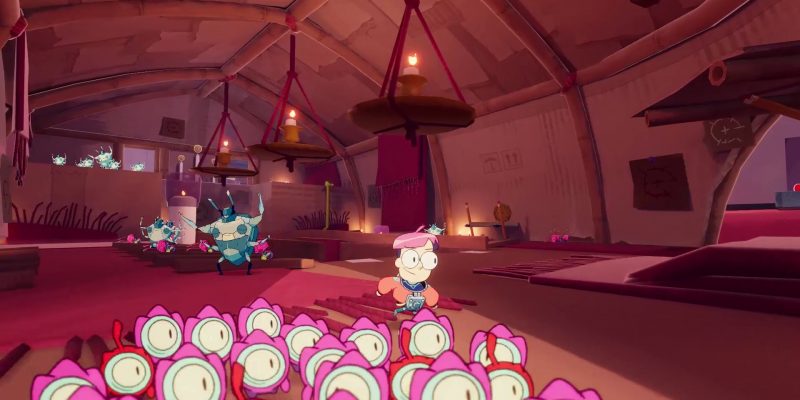 The idea of commanding a large army of miniature followers seems to appeal to many people. Several games tackled the concept in their own unique way, with the Pikmin series being one of the more well-known examples. Fans of this style of game will probably love the look of Tinykin, a charming title recently revealed at the PC Gaming Show. Along with the announcement of Tinykin came a new trailer, which will likely warm the hearts of many who watch it.

Although many other games share Tinykin’s gameplay premise, few, if any, share its art style. Tinykin boasts simple, clean 3D backgrounds populated by fluidly animated, hand-drawn characters. The trailer shows protagonist Milo tossing the titular tinykin to accomplish various tasks, such as moving a mug to make a bridge fall down and forming a makeshift ladder to scale certain platforms. Milo also sports a surprisingly fluid, dynamic set of platforming maneuvers, as he is shown forming a bubble around himself to cross gaps and surfing along the floor to gain speed.

Pikmin in a house

As for the story premise, Milo comes from another planet. Upon making his way to Earth, he discovers that he roughly equals the size of an ant. In addition, no humans are present, and time apparently remains stuck in the year 1991. Milo must work alongside the tinykin to uncover Earth’s secrets and find his way back home. Along the way, he will meet ants and a variety of other insects who have built civilizations within the enormous house he explores.

The trailer excellently conveys the charm and appeal of Tinykin, which made it one of the best reveals of the PC Gaming Show by a comfortable margin. Developer Splashteam and publisher Tinybuild plan to release Tinykin sometime during 2022, so those interested can watch out for more news leading up to that point.