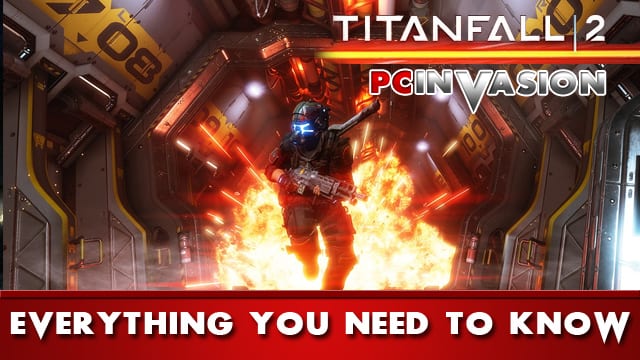 Respawn’s Titanfall 2 will be released on 28 October, returning players to the war-torn Frontier as pilots of large, mechanised Titans. Primarily a multiplayer game, Titanfall 2 pits teams of pilots and Titans against one another in modes like Deathmatch, Last Titan Standing, and (new to Titanfall 2) Bounty Hunter. Pilots are faster and more mobile when on foot, able to perform actions like wall-running. When piloting a Titan, they sacrifice this mobility for heavier weapons and a great deal more health.

The game has a distinct lack of backstory (though that may change a bit with the addition a new single player campaign mode), but basically the Interstellar Mining Corporation (IMC) have endless beef with the Frontier Militia.

As mentioned, Titanfall 2 will have a full single player campaign. In it, you’ll play a Militia rifleman unexpectedly thrust into the role of a pilot. Togther with a veteran Vanguard-class Titan (the Titans seem to have personalities now, and ‘bond’ more with pilots), you’ll have to complete your mission behind IMC lines. It’ll probably have a bunch of explosive set-pieces and stuff like that.

Multiplayer will be getting a new mode called ‘Bounty Hunter’, which is said to be an evolution of ‘Attrition’ from the first game. It’s a 5v5 mode where score is given for completing set objectives (kill 20 spectres, kill one overpowered Titan) rather than destroying enemy players. First team to a set number of points, or the team who are ahead when the time limit expires, wins.

New maps are obviously confirmed, and the one being shown at E3 was called ‘Boom Town’; an IMC training facility under bombardment.

Respawn have confirmed that all post-release maps and modes will be free DLC. That may suggest they have plans for other revenue streams (microtransactions?) but this is not confirmed.

There are six new Titan types in Titanfall 2. They are all named, and each one will be talkative. Titan load-outs are now a lot more rigid, with each one having three unique abilities and a ‘core’ ability. There are also two passive abilities, which will likely be up to the player to choose. So far, the Ion (lasers and particle accelerator), Scorch (flamethrower, mortar with burning rounds) and Ronin (big sword) classes have been revealed.

Another significant change to Titans is the removal of shields. There is now just a Titan health pool (which does not regenerate), and when depleted the Titan will go into the doom-state. The doom-state is also different from the original game. Rather than having your health tick down until death, the doomstate is now indefinite but leaves the Titan vulnerable to a one-hit melee ‘execution’ from other Titans.

While Titans don’t have regenerating shields any more, it is possible to get a small amount of health back by capturing a battery from another Titan. This feeds into changes made to the ‘pilot rodeoing on the back of a Titan’ mechanic which we’ll go into more in the next section.

Since we left off with it above, here’s what’s different about pilots doing the rodeo thing on Titans. The first time it happens to a Titan, the pilot pulls out a battery. Pilots can give this battery to fellow Titans for a health boost (as noted above). If they’re killed, the battery stays on the ground, and anybody can grab it. That includes people piloting Titans, who can stop, get out, and nab the battery.

After the battery is taken out, subsequent rodeo attempts involve the pilot tossing a grenade down the hole left by the battery and doing a set amount of damage. You no longer cling indefinitely to the Titan, the game will throw you off after you’ve done your designated action. You’re free to jump back on again, but you’ll have to do it successfully five or six times to take down a Titan from full health.

Pilot loadouts are still customisable in Titanfall 2, they haven’t been locked down in the same way as with the Titans. Tactical abilities like Cloak, Stim, Radar Pulse Ordinance, and the all-new Grappling Hook have been confirmed. Primary and secondary weapon slots return, each with their own slots for passives and/or perks.

Pilot movement is a subject of much debate right now, as there are conflicting reports and quotations circulating about whether it has been slowed down. Until more people get their hands on the game itself, it’s hard to offer a definitive statement on this. For now, while wall-running and the like is all still in, the ‘feel’ may have changed.

Two additional movement types are confirmed in the grappling hook (usable on basically everything besides friendly pilots; geometry, enemy titans, enemy pilots etc) and the slide, which can be seen in the multiplayer trailer below around the 1:20 mark.

There will be no multiplayer beta test on the PC. “The single player story has some wonderful secrets that we really want to preserve for launch,” Zampella writes. “Our wonderfully curious PC players have proven in the past that they will dig out anything they can, and there’s a risk that they could spoil some of our single player.

In the single player campaign, players will experience the story and relationship between Titan BT-7274 and 3<sup>rd</sup> Class Rifleman Jack Cooper, as they explore the mysterious planet of Typhon and discover the Interstellar Manufacturing Corporation’s (IMC) intentions. BT is the first Titan built by the Militia to battle the IMC, who’s capable of using any Titan loadout and embodies the Militia’s Culture of teamwork, craftsmanship and looking out for each other.

Jack Cooper is a grunt with aspirations of becoming a pilot, whom Militia Captain Tai Lastimosa takes under his wing and trains in secret. When an investigation of a research facility on the IMC controlled planet of Typhon goes wrong, Lastimosa is killed in action, there is no other option but for the two to link up and work together to finish the mission BT and Lastimosa started. The more BT and Jack work together, the stronger the bond between Pilot and Titan becomes

Back in June, we stated that all post-launch maps and modes for Titanfall 2 will be free for all players. This was driven by some things we learned following the release of the original Titanfall, and our desire to build and sustain a vibrant, thriving community that can always play together. This means it’ll be easier to play with your friends, not having to worry about who has what map pack or mode because everyone will have them.

The game’s first free map will be released in December and it’s a fully remastered version of the Angel City map.

No big shock to see Titanfall 2 had some pre-order editions.

Standard Edition comes with just the Nitro Pack, which consists of the following:

By Logan Broadley23 hours ago
Guides