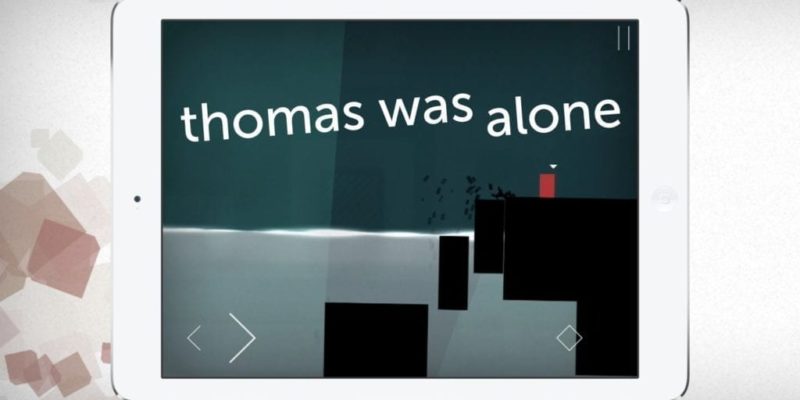 Bossa Studios and Indie Developer Mike Bithell have announced that the award-winning indie hit Thomas Was Alone is ‘inverted falling’ onto the App Store (for iPad) and Mac App Store today. The game was previously released for PC and PSVita to international critical acclaim.

Thomas Was Alone for iPad brings the gentle geometric adventures of a group of quirky quadrilaterals to a whole new audience of players, with the controls lovingly re-designed to provide a fully optimized touch–screen experience.

With its minimalist, old-school aesthetic, Thomas Was Alone encourages players to invest themselves in an emotional experience, inviting them on a journey filled with heroes, villains, master-minds and lovers! An adventure that lingers long in the memory, Mike Bithell’s creation is given a compelling narration via Danny Wallace’s BAFTA-award winning voice-over, and is accompanied by a magnificent electronic soundtrack composed by David Housden.

Thomas Was Alone received additional BAFTA nominations for Best Story and Best Music, and following the overwhelming critical and commercial reception on Steam and PlayStation Vita, Bossa Studios stepped in to help realize the anticipated release on iPad and Mac.

“I’m honestly still a bit surprised that Thomas Was Alone has found the audience and critical reception it has,” explains Mike Bithell, the game’s creator. “I’m really happy to be releasing a solid version of the game on iPad with the help of the talented folk at Bossa Studios.”

“I’m proud that Bossa is bringing this immense indie success to millions of new fans on the iPad” adds Imre Jele, co-founder at Bossa Studios. “Thomas Was Alone genuinely feels more personal and intimate on a touch-screen device. There’s now an instant connection between you and the lovingly crafted characters of Mike’s powerful narrative.”

Praise for Thomas Was Alone:

“Across the game’s gaps and hazards, there’s a real emotional journey filled with narcissism and jealousy”
New York Times

“Sumptuous visuals and an engaging story”
The Guardian

“It proves that you don’t need tens of millions of dollars and hundreds of staff to make a game story worth telling, just a good hook, an engaging vision, and a whole lot of heart.”
9/10 – Destructoid

“Thomas Was Alone is a winning piece of minimalist game design that manages to do a lot with a little in an industry which far too frequently achieves the exact opposite, and it deserves much praise for that”
8/10 – Official PlayStation Magazine

Get Ready for the Assault. Men of War: Assault Squad 2 Available