I’ve just coaxed my final golden frog into a suction tube and saved a village community of flightless birds. That’s what I do now, I lure, cajole and manipulate golden frogs into pipes. If you need amphibious creatures jammed into funnels, I’m your man.

This is Toki Tori 2+, an adorable (and pretty bastard hard) puzzler from indie developers Two Tribes. Originally a Wii U title, this enhanced edition is heading PC-wards with a full level editor and Steam Workshop integration.

That’s me there, whistling a merry tune and thinking about the noble trade of pipe-jamming frogs. Whistling isn’t just good for a lark, it can also attract them. Or any species of bird, really. It can also call scuttling lobster-boxes to you and encourage other wildlife to at least look your way. It’s one of the two skills that Toki Tori 2’s flightless, sorta kiwi-chicken-duck hero possesses.

The other is the stomp. With this, you can bash through collapsible bridges, trigger angry porcupines and knock unwary animals off ledges. Broadly speaking, the whistle “calls” stuff and the stomp pushes them away. There are exceptions, but that’s the general gist.

You’ll also pick up some specialist whistling patterns along the way, but every single puzzle can be solved with just the basic whistle/stomp combination. Patterns just allow you to do things like rewind to a prior checkpoint when you screw up (may as well memorise that one,) and magic up a camera for the entirely optional mini-game of “photograph all the stuff in Toki Tori 2 for your virtual scrapbook.”

These frogs are right to be nervous. They could be jammed inside a pipe at any moment.

I’ve just taught you about the basic mechanics through the medium of words, but Two Tribes go one better in the actual game. Toki Tori 2 has a magnificent non-tutorial, featuring no text, no exposition and absolutely no “PRESS A TO WHISTLE” pop-ups. Everything the player needs to know is taught through visual cues and humanity’s inherent curiosity. It’s superb, and maintains just the right air of mystery to prod you into continued exploration.

At first, you won’t really know what to do. But press on, bold videogame player, press on. Two Tribes has taken a gamble with such a minimal approach to player guidance, but it’s a brave and fantastic decision that really pays off. It’s refreshing, a little exhilarating, and sadly all too rare to just be dumped into a new videogame world with few prompts and no clear objectives.

In fact I don’t really want to write too much more about it, because much of the early joy in Toki Tori 2 comes from experimentation and discovery. Needless to say, you’ll be forcing frogs into tight spaces before too long. What begins as a somewhat linear puzzler evolves into something much closer to an open world after the opening hour or so of play.

When I saw this level’s puzzles, I almost silhouette myself.

Here’s a stroke of genius on Toki Tori 2’s part, though: it was actually an open world all along.

As you progress along the more ‘signposted’ route the game offers, you’ll pick up various tricks and learn how to deal with certain roadblocks. Pesky electric creatures who emit a barrier-like charge, for example. Once you know how to get around these obstacles, it’s possible to return to previous locations and make progress in new directions. The marvellous thing is, if you were to figure this out sooner those pathways could be opened up right away.

This goes for everything in the game. Did you mess around with the whistling function enough to unlock the checkpoint-rewind or camera mechanics before the game made an effort to tell you about them? Congrats, you were rewarded for your experiments.

What appears to be a world where certain routes are blocked off is actually completely open from the start, but it takes time for this revelation to sink in and for you to acquire the logistical skills to cope with it. Happily, Toki Tori 2+ avoids too much backtracking (and repeating of already solved puzzles) with a series of well-placed waypoints and mole tunnel shortcuts.

Puzzle design is exemplary throughout. Either that, or they were all scientifically tuned to the precise bliss-spot in my brain that triggers from solving something just prior to it becoming slightly too frustrating. The “just trying stuff out” to logical reasoning ratio is outstanding. Multiple puzzles had me baffled for 15-20 minutes or so, but nothing irritated, confused or felt like it had a cheap solution. Almost everything has an elegant, simple resolution if you’re willing to figure it out.

To get by, you’ll have to recall prior knowledge, utilise both of your basic skills in novel ways and engage with both the environment and wildlife. The title introduces just enough new concepts, at a sensible pace, to sustain this model throughout.

Once you’ve polished off the main, frog-centric mission and seen the credits roll after 8 or 9 hours of puzzling, there are still collectables to be retrieved. Scattered across the levels are golden feather-like icons that are required for unlocking additional levels and secrets. This is no small undertaking and (judging by how many were still left on the map even after I’d ‘finished’) could well double that completion time.

As mentioned, there’s also a level editor with Steam Workshop integration. It looks a little something like this.

The hardest part is trying to construct meaningful puzzles in reverse. So I did something stupidly easy instead.

Pretty typical stuff for an editor. There’s a handy beginner’s guide for people to read over, and the editor is responsive enough that you can learn quite a bit just by diving in and messing about. Placing items, creatures and the like is a simple case of selecting an icon and then dropping it into the world.

Within a matter of moments I’d managed to create quite possibly the most challenging level in all of Toki Tori 2 history.

YOU’LL NEVER ESCAPE FROM … oh, you have.

The PC options are unassuming, but reassuring. You’ve got basic resolution choices, a bit of leeway with how shadows appear and a “30 fps” toggle that must surely be some sort of trap. Nothing too extravagant, but then this is a colourful side-scrolling puzzle game starring a plump fluffy bird. Triple-buffer downscaled anti-aliasing (is that a thing?) is probably a bit unnecessary.

Hey, have another screenshot to see for yourselves.

Pretty much the only time you’ll see explanatory text of any kind in this fantastic game.

You should have figured out by now that I like Toki Tori 2 a great deal. Going in, I was anticipating a cute puzzler and something to do with frogs. It is cute, so I was right about that. There are adorable creatures, environments that know the right way around a colour palette and delightful, borderline-twee tunes. But the game is just as cute in the other sense of the word. It’s sharp and ingenious; a title that knows its craft well enough to slot together a significant number of clever, yet elegant, puzzles from simple pieces.

Jamming perky golden frogs into vibrant pipes shouldn’t really make you feel all that smart; Toki Tori 2+ makes it feel like the act of a god damn genius. 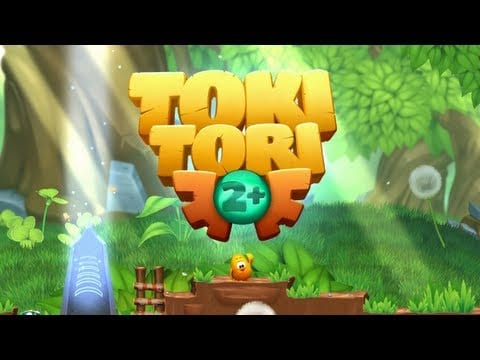 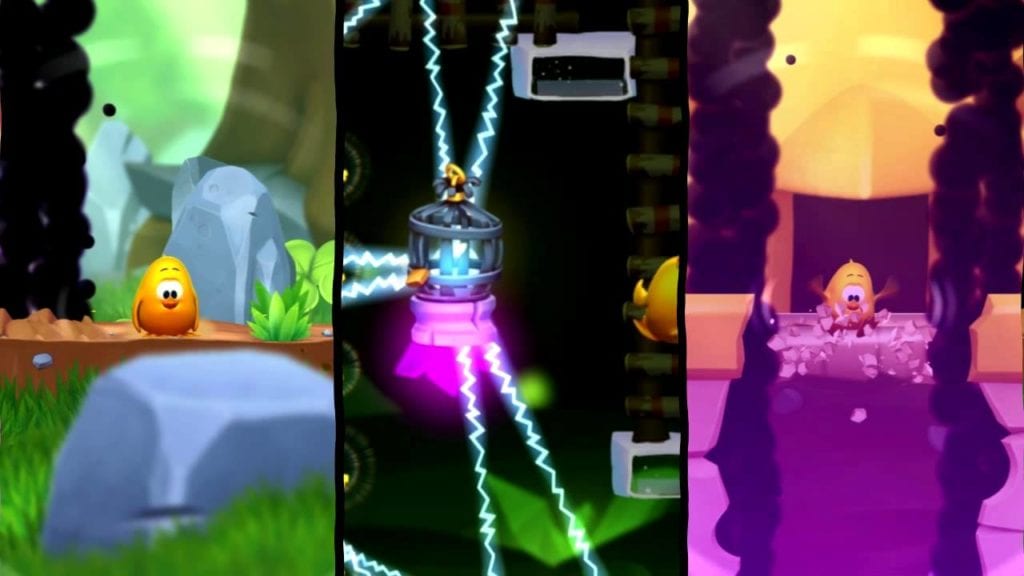