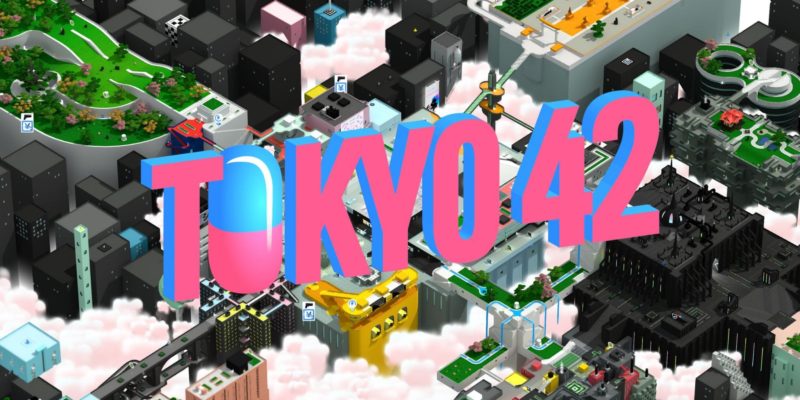 Tokyo 42 is one of those wonderful games, in that you can probably tell if it’s your sort of thing based solely on an initial description. Here we go: Tokyo 42 is the love-child of Grand Theft Auto (the original one, not the 3D sequels) and Syndicate (the original one, not the bastardised FPS) in which you play a hitman in a futuristic Tokyo skyscape. It’s isometric, potentially stealthy, and tremendously silly.

As an example of the latter: the game starts with you being framed for murder, so the obvious solution to track down the real killer and clear your name is to… become a hitman. But it’s okay! Everyone (except for the person you’re accused of killing, and a scattered few others) are taking wonder-pills that restore them to life after being shot, so being a murderer-for-hire is a bit more of a moral grey than you’d expect. Getting shot in the face is really more of a mild inconvenience than something actually life-threatening.

I will say that “love-child of GTA and Syndicate” is mildly misleading, in that it doesn’t really play like either of them, but despite being inaccurate in almost all of the details it still gives a pretty good idea of what Tokyo 42 actually is. And yes, I realise how contradictory that is. 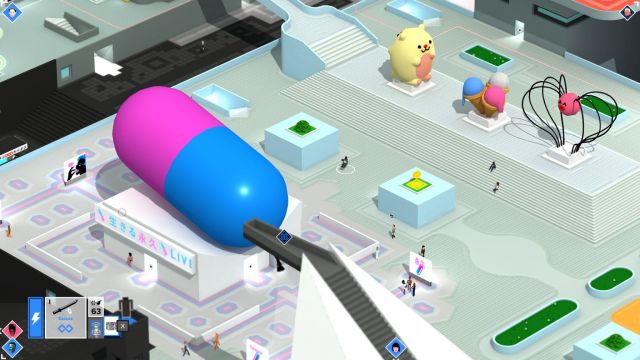 The rooftops are future Tokyo are a weird place.

In any case, you have an utterly sumptuous open-world viewed from an isometric perspective (rotatable in 45 degree increments). Movement is controlled via WASD rather than clicking, but aiming is entirely mouse-controlled. In that sense, it’s a little like a traditional twin-stick shooter, although the isometric perspective and ponderous bullet speed makes aiming a little bit trickier than you might expect.

In this open world, you’re ideally aiming to complete the main story, but plenty of terminals offer up side contracts and there are an assortment of unlikely allies with their own mission chains to complete, as well as gang strongholds to complete. And yes, the gangs are all as ridiculous as you’d expect. Guys in suits and punks? That makes sense. Mini-golfers and nudists? Not so much.

Some are relatively in-depth, while others focus on one particular aspect of Things That You Can Do. One series of terminal-based missions set you up on a high point and task you with sniping distant targets in a time limit, which requires a good amount of movement prediction; another throws you into a free-for-all combat arena.

Stealthily slit some throats, or just open fire and hurl ludicrous amounts of grenades? Both are viable options.

Main missions give you a lot more freedom, and usually task you with picking off a particular target in a heavily guarded area – occasionally, using a specific weapon. It’s up to you whether you opt to sneak through, using temporary disguises to blend in and a melee weapon to silently dispatch foes, or go in guns blazing and shoot the hell out of everything with a minigun. Yes, of course there’s a minigun. This claims inspiration from Syndicate. Miniguns are mandatory.

That said, this is pretty far from an actual stealth game. If you get spotted then, yes, pretty much everyone within a ten-block radius will open fire on you, but they’re entirely undisturbed by the sight of dead bodies and a guard won’t react to suddenly discovering the corpses of their three rooftop colleagues. While it’s a little odd, it works rather well for the game. Dragging corpses around and trying to hide bodies would slow the pace down immensely.

Also, getting spotted isn’t really a huge deal, most of the time. It can be disastrous if your mission is to murder someone with a katana (or golf club), and there are Ninja awards for finishing a mission without being spotted (also Ronin awards for murdering everyone, and Roninja awards for murdering everyone without being spotted) but as far as I can tell they don’t really mean much except as a badge of honour. Often enough, it’s a case of being stealthy until you slip up, and then opening fire with a minigun, a shotgun-pistol, or a rocket launcher. 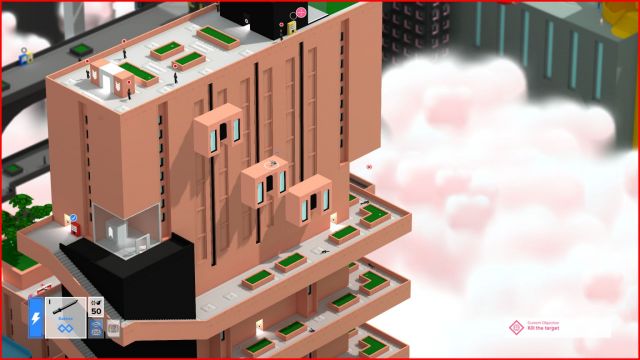 There are some utterly wonderful uses of perspective, like this bit where I ignored the front door and scaled a building by hopping along the tops of the external elevators.

I want to take a step back and talk about the tone again for a bit, because it’s a large part of why I really like Tokyo 42. Despite the subject matter, it’s really rather light-hearted and ridiculous in an endearing, over-the-top way. Completing a mission often results in a Nemesis being sent after you – someone who looks just like a random civilian until they open fire. Other than trying to spot them in the crowd, your method of detecting them is… to use a robot cat, which wanders around and sniffs people until it finds them.

A golf club is a suitable replacement for a katana, and “bananas” are one of the things that can fit into your grenade slot. The world is full of secrets, ranging from new colours for your weapons and your Trackacat to weird little things you can tag with your binoculars, like a man dancing in a room full of giant pills. Leaping across rooftops, jumping onto moving flying cars and using them as impromptu transport, and dropping off skyscrapers are all things you’ll do more than once (and you’ll probably die attempting most of these, too, resulting in a very quick respawn). Hell, the game has a dedicated button – Caps Lock – for putting on a trenchcoat. This does absolutely nothing except make you look and feel more badass.

This tone… does get a little bit sidetracked towards the end, annoyingly, as the game suddenly starts to develop a bit of a cyberpunk-y plot and takes itself a little bit seriously. It doesn’t last very long, but it’s a tiny bit jarring after 20-odd missions of sniping golf magnates and unleashing cyberkitties. 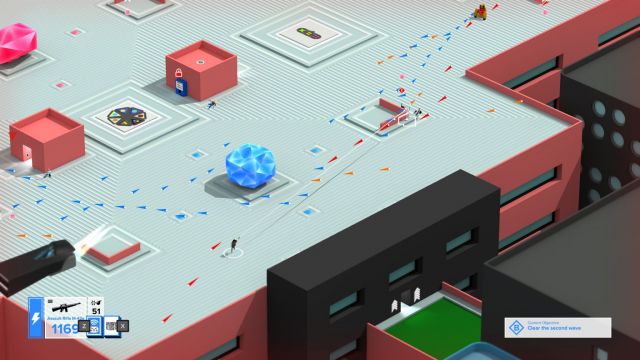 Despite the slow-ish bullet speed, massive battles are… hectic.

Tokyo 42 also isn’t an especially long game – doing the main missions and a large part of the side quests will probably take around seven or eight hours – but it feels just about right, and ends around the time it’s starting to feel a little bit tired. While you’ve got a fair few options as to how exactly you go about things, most things boil down to “sneak around with camouflage and ducking behind stuff and stabbing people” or “take cover behind stuff and shoot at people”, and it lasts just about long enough to let you make the most of these.

Problems appear when it tries to go outside of these limits. There are some motorbike-related missions which are genuinely painful, and a few parkour missions in which you have to hit very specific checkpoints in a very tight time limit… and, with the viewpoint and the often levitating nature of these things, the perspective can make it really hard to figure out if you’re going to touch one or not. Similar goes for the motorbike stuff, really: rotating the camera repeatedly is a necessity just to make sure you’re actually going where you think you’re going, because the addition of height as a dimension and little things like “buildings” often get in the way of your view. 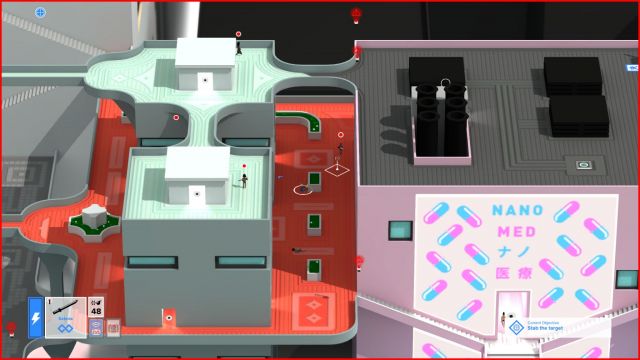 For instance: the need to constantly shift perspective in this bit to not block my own view, see around corners, and pay attention to guards on three height levels, nearly gave me an aneurysm.

Arguably, this perspective stuff is actually Tokyo 42‘s biggest weakness. Most of the time, it’s not a problem and lets you thoroughly enjoy the lavish world design. In one or two areas, it’s a massive headache with buildings blocking your view no matter what perspective you use. When you start getting into massive fights with ten or more foes, with bullets flying everywhere, it’s an absolute pain to figure out quickly if you’re in cover; or if you’re going to walk past or into a bullet. Again, this is more a problem with the later missions or the specific occasions when you have less choice as to how to go about things, but it still crops up regularly and it’s a pretty fundamental issue with how the viewpoint works.

This is a problem. I also wish that Tokyo 42 embraced its somewhat ludicrous nature and offered up more of a sandbox of possibilities; I’d have loved for more absurd weapons and situations, and more unique interactions in this wondrous future cityscape. Mention is made of how the police will chase after you if you start mowing down civilians, and how you can avoid pursuers by changing appearance when out of their field of view (as long as you’re not still near enough to be suspected) but these things rarely come up over the course of gameplay, and that makes me a little sad.

Still, some of this is a little outside of the game’s scope, and saying “Oh, if only it had this” isn’t really fair. So instead, I’ll say this: its issues and occasional shortcomings didn’t hugely detract from my enjoyment, and instead just left me with a longing sense of “what if”. Tokyo 42 is still a good game. It’s just one that comes close enough to being a great one that its flaws sting a little bit more than they probably should.

Some flaws in perspective and a few attempts to do a little too much don't detract from a solidly entertaining shooty sneak-'em-up.