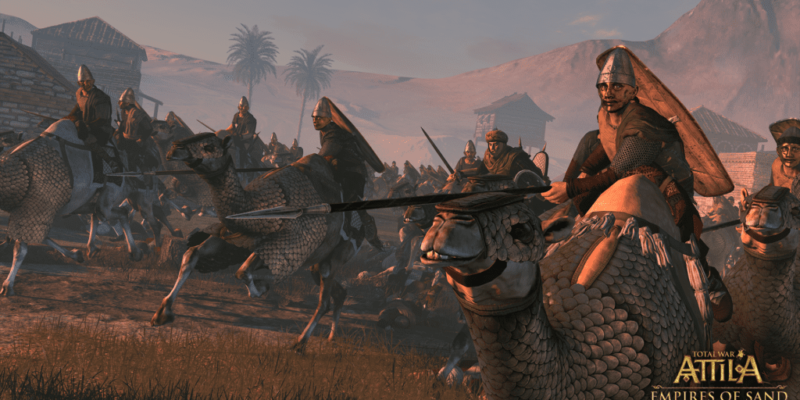 An upcoming ‘Culture Pack’ for Attila: Total War, Empires of Sand, will add three new playable factions from the deserts of the Middle East and Africa to the game.

Releasing on 15 September (for $8.00 USD), this DLC will give players the chance to lead the Aksum, Himyar and Tanukhids to glorious victory. Or glorious just-about-survival. Depending on how well you do.

“Over fifty” units are said to be added to the campaign by Empires of Sand, which suggests relatively healthy rosters for all the newcomers. There’s also a focus on religion, with “a number of changes that increase the importance of religion including building chains, victory conditions, events, technologies and overall campaign bonuses”.

Eastern Christianity, Judaism and Semitic Paganism will all be introduced. Here’s how they’ll affect matters (straight from the Steam page linked above):

Religion now has further-reaching effects, influencing many aspects of Desert Kingdoms campaign gameplay. It is deeply intertwined with a number of features including building chains, victory conditions, events, technologies and overall campaign bonuses:

Tier-5 barracks.
Aksum and Himyar have two new tier-5 barracks available, one for each religion. To unlock a barracks, the faction must have 75% influence in the respective religion. These barracks buildings each provide three unique elite units as well as unlocking a variety of campaign benefits.

Split victory-conditions and achievements.
Desert Kingdoms factions have two sets of victory conditions, one for each of their main religions, that involve a number of units and structures related to that religion.

Pleasure building-chain.
Non-horde Desert Kingdoms factions have access to a new industrial building-chain which provides large sums of money, but decreases your majority religion, meaning you must choose between religious stability and financial gain.

Religious technologies.
Each non-horde Desert Kingdoms faction has a technology chain for each of its main religions. These convey a number of religious and campaign bonuses to help you manage and optimize your religious choices.

Increased Religious Discord Penalties.
The public order penalties for religious disharmony within your provinces have been increased between the new religions, meaning that the benefits are balanced with increased risk if you fail to manage your religions correctly.

Reactive Religious events (Aksum and Himyar) .
Two new events have been added that trigger when certain religious conditions are met, and provide you with intriguing dilemmas and missions.”

In addition to all of that, there are said to be new objectives, skills, buildings, religious events, ancillaries, and narrative event chains for all factions introduced by Empires of Sand.

Here’s a cinematic-style trailer and some images.

The Witcher 3 sets Hearts of Stone pumping in October