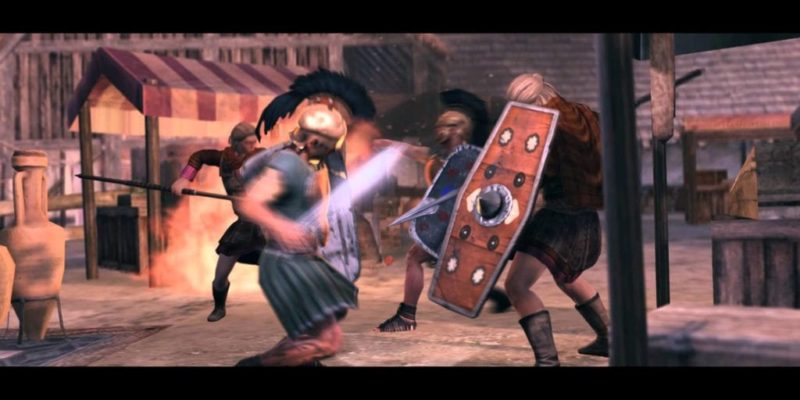 Well, at least she isn’t using the spear point.

You’ll now be able to sweep the planet (or, well, Europe and some of Africa) with an army worthy of Boudicca in Total War: Rome 2, as Creative Assembly adds a lot more women to the game in both free-DLC and paid-DLC forms. Let’s have a look at what both of these updates add (sadly, no sign yet of an actual in-game Boudicca.)

The freebie DLC should download automatically on Steam, but if it doesn’t try restarting the client. It adds a few free, all-women units to the game and also provides a decent update to the original Rome 2 Suebi line-up.

Here’s what you get:

• Amazonian Riders (cavalry, bow): can be recruited by Royal Scythia, or as mercenaries in Sarmatia, Ponto-Caspia and Scythia.
With excellent bow-range and able to form Cantabrian Circle, Amazonian Riders are adept at keeping the enemy at arm’s length.

And here are the Suebi-specific bits:

• Horse Runners (infantry, javelin skirmishers):
These fleet-of-foot warriors can strike hard and fast from cover, making them the elite of the Suebi skirmishers.

• Spear Wall (infantry, spear and shield):
The most defensive spear unit in the Suebi roster, Spear Wall is a bulwark against even
the most powerful cavalry.

• Riders of the Hunt (cavalry, spear):
Few warriors have faced a charge from these terrifying, frenzied horsemen and lived to tell the tale.

So, that’s the free stuff. For $3.00 USD, you can also get the Daughters of Mars DLC for even more women to add to your ranks. This unit pack adds the following options to Rome 2:

Here they all are, fightin’ around the world in the inevitable DLC trailer.

Galactic Civilizations 3 beta beams onto Steam at a lower price