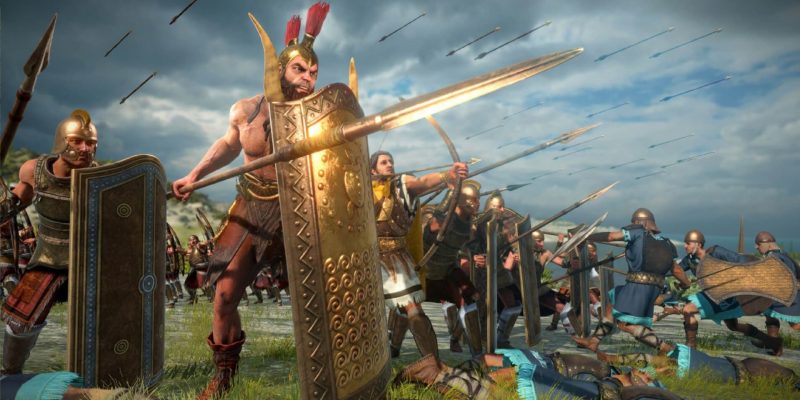 Telemonian Ajax, Big Ajax, or Ajax the Great — this mighty warrior goes by many names. The lord of Salamis and bulwark of the Danaan forces joins Total War Saga: Troy‘s roster as part of the Ajax & Diomedes DLC. Here’s our guide to help you out.

Note: For more information, check out our Total War Saga: Troy guides and features hub. Likewise, be reminded that this guide is for veteran (very hard) difficulty.

Ajax has a unique perk called “Son of Telamon and Eriboea” which gives his army +12% movement at sea and +5% missile resistance for all units. Although he’s able to recruit different hero types, he’s not able to field Warlords. As for his skills, you’ll want to focus on Ajax’s defensive capabilities and infantry boosts (especially for armored/shielded units). These really fit his playstyle. 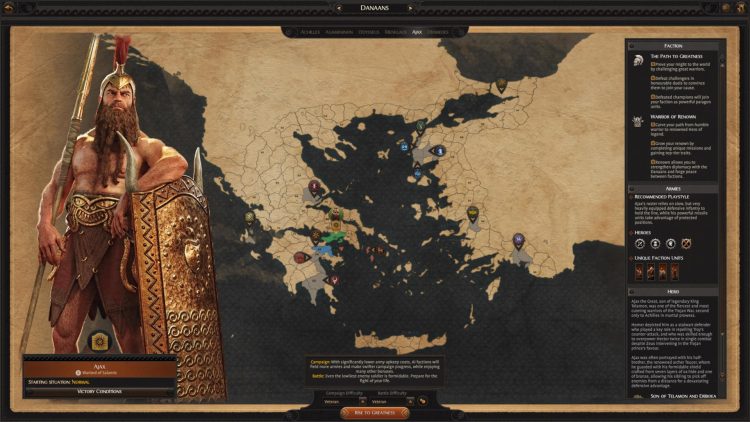 Speaking of renown, this “resource” is shared by Ajax’s unique mechanics (Warrior of Renown and Path to Greatness). A bar at the top of these panels shows Ajax’s renown level and thresholds. The higher the value, the higher the bonuses you’ll get when it comes to diplomatic relations with the Danaans and deal evaluations (except for barters).

Renown increases through the following means:

The Warrior of Renown mechanic allows you to broker peace among other Danaan factions, but you do need a bit of renown first. Once it’s available, Ajax will start a celebratory feast and you may invite up to three factions. The number of factions you invite is tied to how many ancillaries you can offer as prizes. You might want to beat up rivals (or construct the Makers’ Camp building chain) if you want a bigger item pool.

Assuming you’ve enacted the celebration, the factions you invited will give you resources. Aside from peace being declared, you and the entire bunch receive diplomatic relationship boosts too. 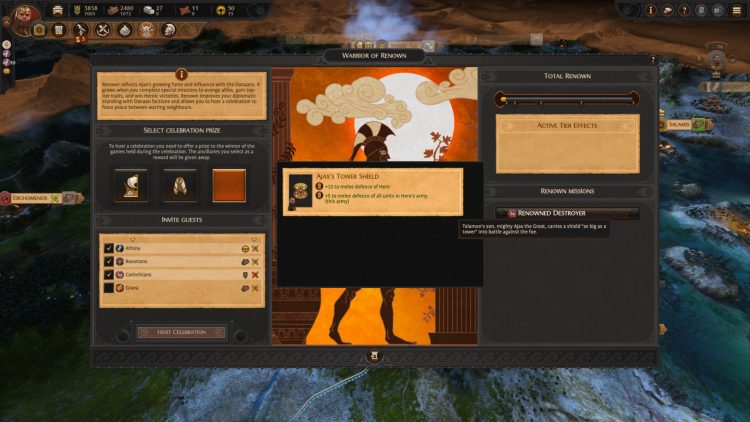 The panel also shows any renown missions that are active. These pop up when an ally gets attacked, and you’re given a choice on what to do with the enemy faction. You can either make it your goal to eliminate the faction entirely via conquest or confederation (netting you a diplomatic bonus that lasts longer), defeat only the army led by that faction’s leader (providing a shorter diplo bonus), or remain neutral.

Choosing to defend your ally leads to an automatic declaration of war against the enemy faction. Likewise, your units will be stronger against that faction while the renown mission is active. 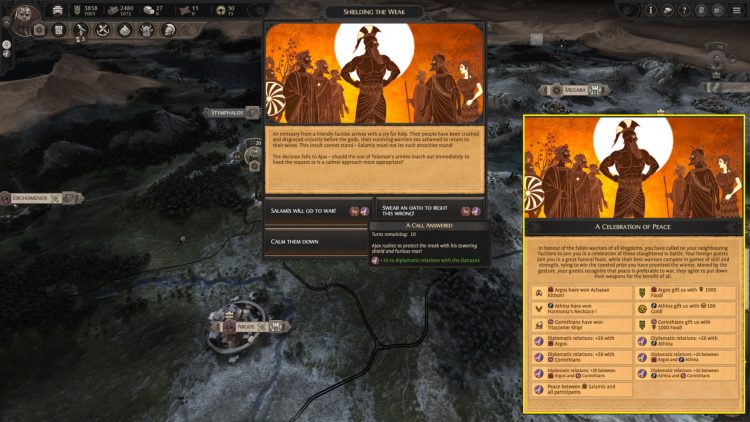 Think of Ajax’s Path to Greatness as somewhat akin to Achilles’ Living Legend mechanic. The Path to Greatness panel shows several paragon generals for you to fight, though many require some renown and resources. Once you click on the “challenge” button, the general’s army will spawn on the indicated location.

Note: These armies aren’t tied to a particular faction, but you may incur trespassing penalties if you venture into these territories without military access. Also, try not to spawn the army if Ajax is close to that exact spot. This can cause a bug that will prevent Ajax from moving on the campaign map. 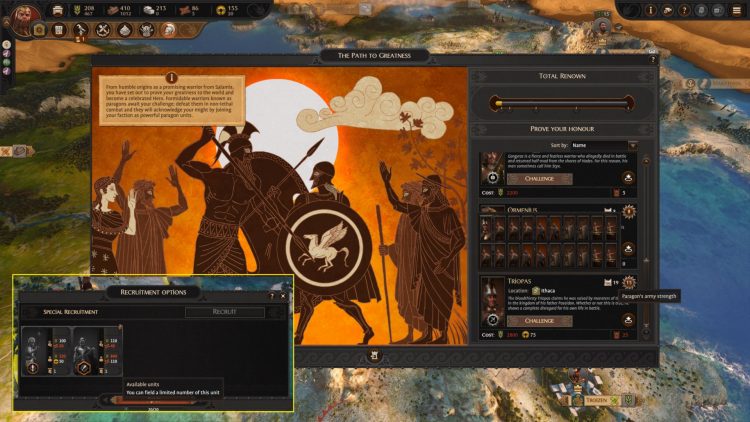 Upon marching towards these armies, you’ll see the usual interface. However, I would suggest auto-resolving instead of fighting the battle manually, especially if the balance of power is in your favor. Heck, neither army would lose soldiers since the game assumes that a friendly bout took place. After winning, a specific paragon unit becomes available in the special recruitment pool.

Note: As an added clarification, I’ve experienced an issue where Ajax lost units (and his army) after being defeated by a paragon general. It’s also why I’d advise simply auto-resolving. It’s possible to get easy decisive victories (or even heroic victories) as you can see in the next two images. 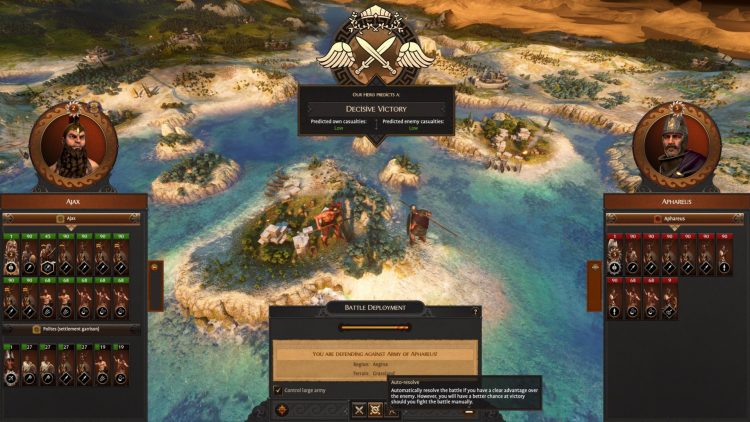 My advice is to go for those who don’t have any renown requirement. Your victories net extra renown that should increase the level/threshold, allowing you to challenge other opponents later.

Anyway, here are some examples of the generals you’ll fight early on in your Total War Saga: Troy campaign:

Note: It seems that there’s a threshold depending on your army’s size/composition that allows for easy heroic victories (for that extra renown). In the example you see below, my army has 11 units (with several low-tier skirmishers) vs. my opponent’s 13 units. Auto-resolve shows a cheesy heroic victory already. You might want to save and reload prior to battling a paragon general’s army to see what nets you this ideal result. 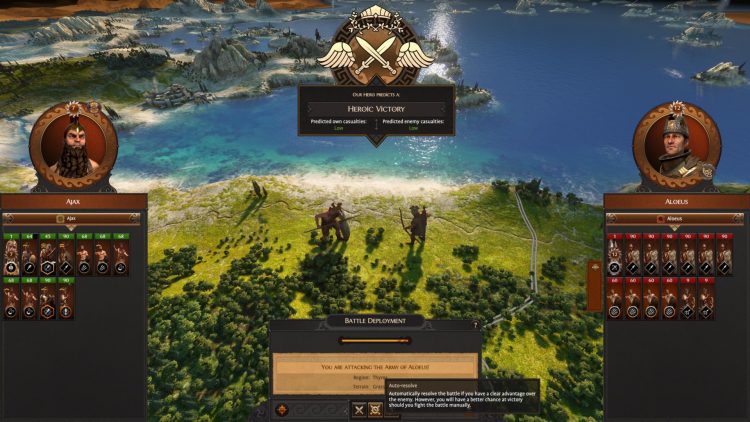 Personally, I think Ajax’s Total War Saga: Troy campaign is one of the trickiest ones, at least for the first 20 turns or so. Fortunately, you start the game controlling Megara and Salamis already.

As for diplomacy, you have a defensive alliance with Mycenae, though you’ll want NAPs with Argos and Sparta. My suggestion would be to go for tactical defensive alliances while avoiding military alliances (unless you want to experience some ridiculous reputation drops when your pals devolve to infighting). Don’t forget to milk the “Danaan Pillar” factions via barter exchanges. You’ll probably need some bronze anyway since one unit (Ajax’s Companions) has bronze upkeep. 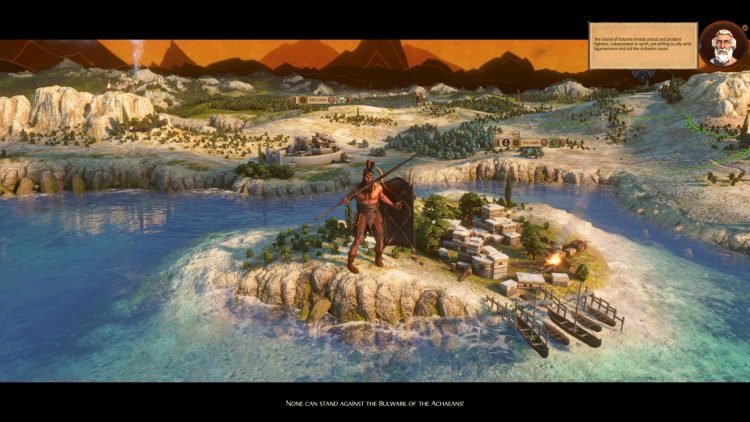 As usual, I suggest going for the Athena -> Hecatomb -> Prayer combo on your first turn to get a full stack in a short while.

Since you’re at war with Akis, you’ll capture Aegina in a couple of turns. Salamis and Aegina provide food and wood respectively. Moreover, Aegina lets you fight your first paragon general (Aphareus).

Note: Later, you should consider capturing Akis’ other settlements (Dryopis and Meropa). Colonize nearby Melos as well to attain full control of the province. The Dryopis settlement has bronze, too, and you’d need more bronze for the upkeep of mid-tier units and paragon units. 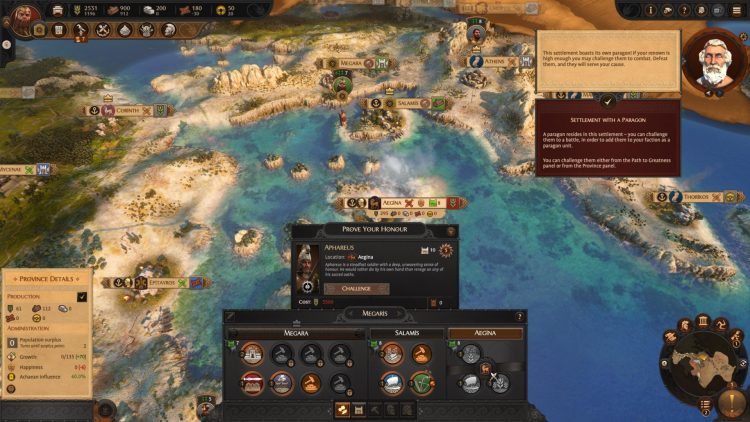 On turn 8, you’ll get the epic mission to have Ajax move to Aegina. Well, you’re likely there anyway, so you’ll get this tally done. 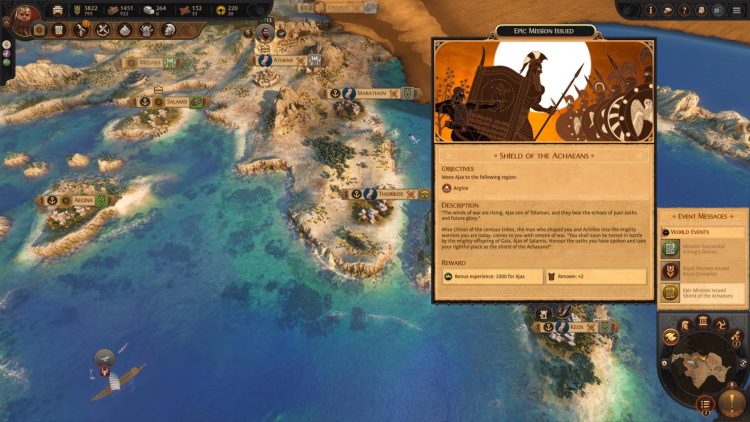 That sounds easy enough, but the next few turns can be tricky. Around turn 10, you’ll have the option to fight the Corinthians. This enables the renown mission.

The problem is that Agamemnon does the “watch me whip, Mycenae-nae dance” all over the Corinthians, taking them out and vassalizing them. 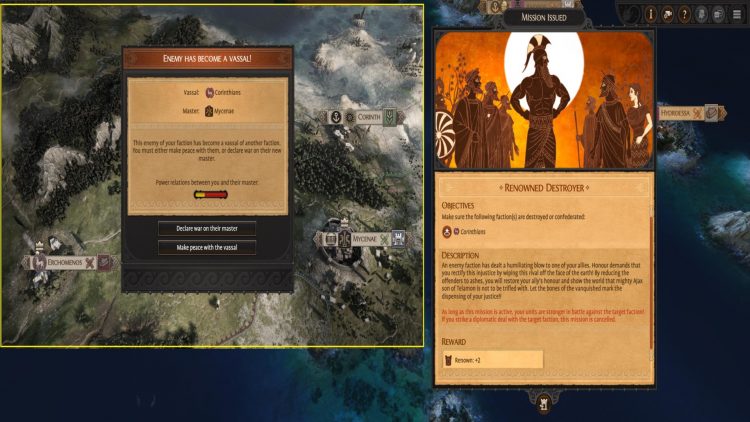 Save-scumming might be imperative here. You can let Agamemnon capture Corinthian settlements, but the last one (usually Erchomenos) has to be yours to prevent any mishaps. Even besieging it and capturing it once Agamemnon’s forces can reinforce you is fine, as long as you avoid the Mycenaean lord from conquering that final settlement. Oh, and watch out in case the Corinthians end up capturing Argos’ lands too.

Note: If Agamemnon vassalizes the Corinthians, kiss your opportunity goodbye. You need to wait until he confederates the faction to complete the renown mission. Alternatively, you can choose to go for the faction leader, but that dude’s army gets destroyed too fast. 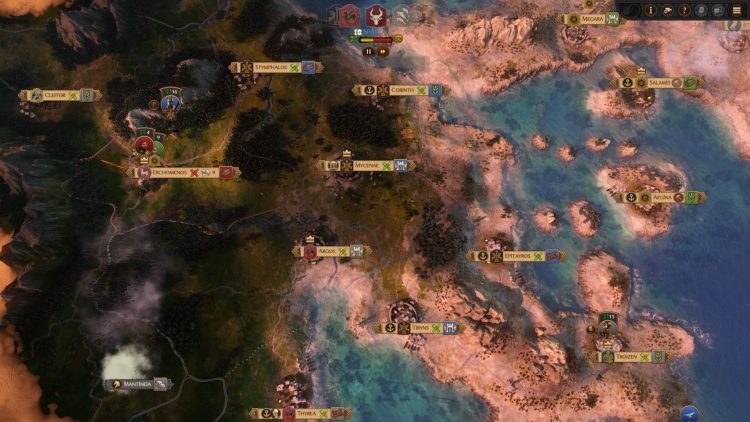 Eight turns after finishing your first epic mission, Ajax gets the next one. It requires his half-brother, Teucer, to reach level 5.

Teucer is a Homeric character, so he can only get wounded if he loses a battle. Furthermore, he gains extra motivation whenever he wins a battle together with Ajax, or after a Warrior of Renown celebration has been hosted.

Note: For some reason, Teucer always remains in Ajax’s hero recruitment pool even if you fielded someone else earlier on. However, if you picked Teucer first, some of the other Homeric characters might disappear after a turn has elapsed. 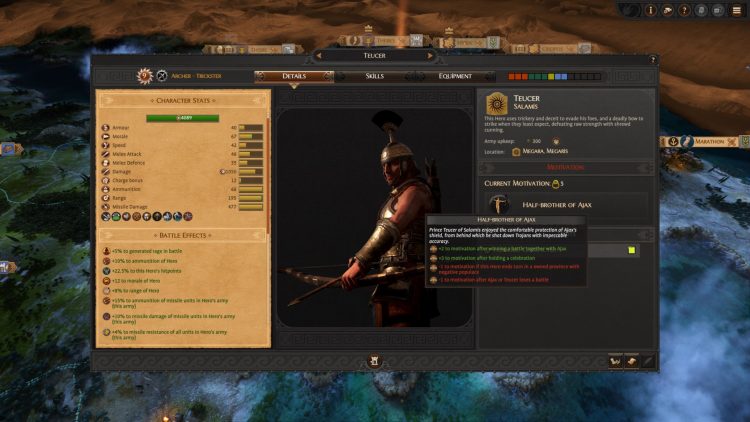 Total War Saga: Troy is available via the Epic Games Store. You can also pick up the Ajax & Diomedes DLC which is sold separately. For more information, check out our guides and features hub.