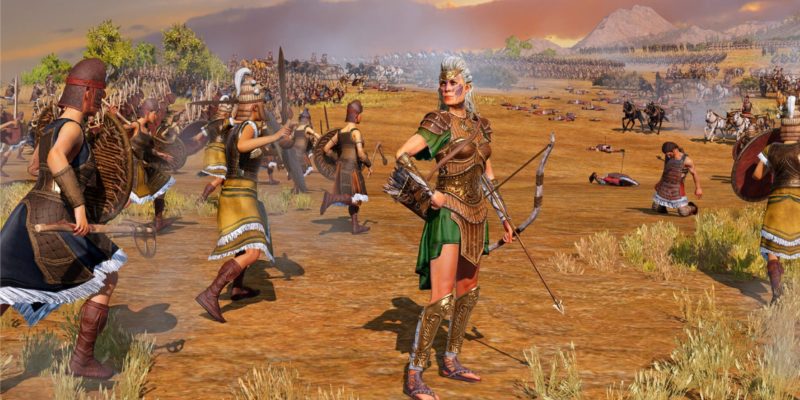 As mentioned earlier, your Total War Saga: Troy campaign as Hippolyta’s Amazons won’t be far removed from the previous ones you’ve experienced before. The biggest differences, though, will come in the form of her unique mechanics such as the Amazon Kingdom milestones, Amazon Treasures, and Sacred Settlements.

Likewise, there’s the Initiation Rites system for unit promotion. It’s a feature that Hippolyta’s sister Penthesilea also has. I’ll explain this below. Similar to Penthesilea, Hippolyta’s Amazons can only recruit tier 1 units—ie Amazon Swordswomen, Amazon Chargers, Amazon Archers, etc. They need to level-up before they can be upgraded to tier 2 and tier 3 versions. You’re also required to construct military building chains to unlock upgrades:

Note: The upgrades are unlocked faction-wide. You only need one type of each building in your entire empire to upgrade units wherever your armies might be. Keep in mind that there are various upgrade paths that you can take (as you can see in the image below). Still, in my opinion, you can’t go wrong with Warmaidens, Aristomachoi, Amazon Champions, and Followers of Artemis. Amazon Treasures (denoted by a white symbol next to your gold resource) are used for numerous boons and effects via the Amazon Kingdom panel (which I’ll talk about later). The resource is gained via the following means: Thankfully, they’re not required to obtain the Homeric Victory. Next comes the bad news. This is actually where I hit a brick wall during my Total War Saga: Troy campaign as Hippolyta’s Amazons. The Homeric Victory requires you to control all six Sacred Settlements. The problem is that there are only six of these in the entire game. I’m not kidding.

I realized too late that mainland Greece didn’t offer more Sacred Settlements. In fact, the last two were already owned by my Trojan allies all the way back to the east. Even if I knew this beforehand, I doubt Hippolyta could rush to grab those last two before her pals take over. There was no other option here but to betray my allies and conquer these territories. Attempting to trade regions or wait for AI minors to “wardec” and take over these lands would be fruitless too. This issue left a sour taste towards the end of my playthrough. This was even though the Hippolyta’s Amazon Kingdoms mechanic is probably one of the coolest I’ve ever seen in Total War Saga: Troy. Here’s how it works: Veteran Tutelage and Sage Mentoring – Spend roughly 7-15 Amazon Treasures each unit level-up. Combined with a prayer to Athena and leader promotions to get higher-ranked recruits, you could boost units and upgrade them to their next tiers quickly. The same also applies to your generals, although the Amazon Treasures costs are a bit higher. It’s only agents that you can’t rank-up this way. Wisdom of the Ages – This instantly completes a tech (around 40 Amazon Treasure per turn that’s remaining), and you could speed up your research like a breeze. Try not to accidentally click on the button for techs that require resources (ie gold) because that’d just waste the treasures for a measly turn. Diplomatic Gift – For 25 Amazon Treasures, you gain +10 diplomatic weight to your proposals (the cost is only subtracted if you go through with the deal). This is completely exploitable too, especially when combined with a prayer to Zeus. Just imagine hundreds or thousands of resources being bartered to you freely for several turns. 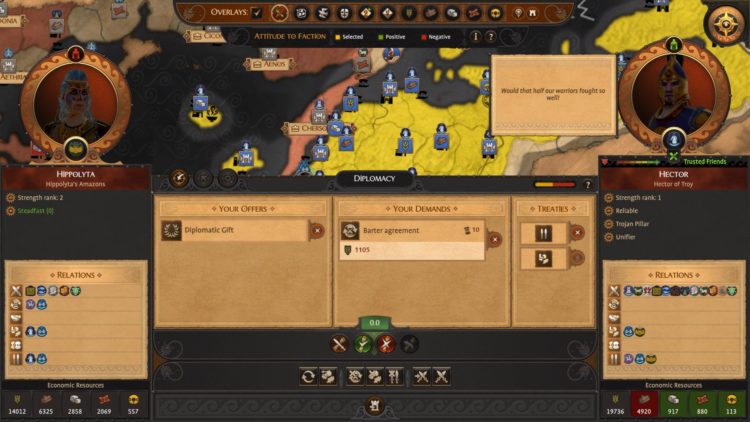 Migration – This is a bit costly (150 Amazon Treasures), but it’s quite helpful and repeatable until the building chain is maxed out. The upgrade is instant and it won’t cost resources, not even population surplus. What’s not to like? These unique features truly make Hippolyta’s Amazons an unrivaled faction in Total War Saga: Troy. When I was playing as the other leaders, the AI-controlled Hippolyta was often the spearhead of the Trojan advance, and she easily painted the map in her colors. Now, I know that she’s just that damn good. It’s just very unfortunate that her Homeric Victory conditions (specifically the Sacred Settlements targets) are borked.

In any case, let’s take a look at how your Total War Saga: Troy campaign would go while you’re playing as Hippolyta’s Amazons. It’s time to talk about her epic mission chain and campaign tips.