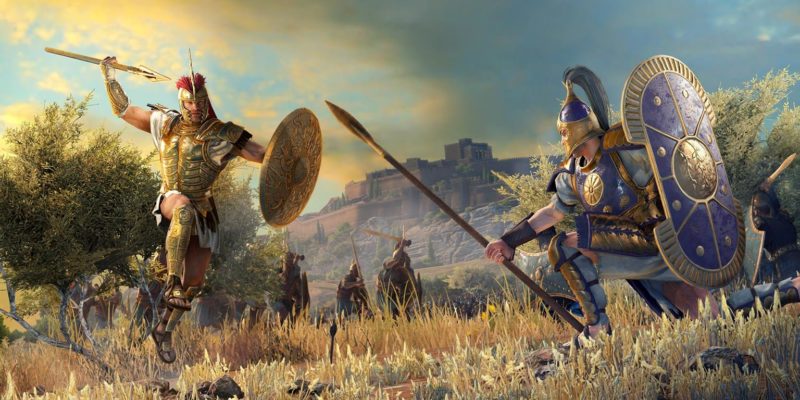 A Total War Saga: Troy is the newest offering from Creative Assembly. It’s also completely free — at least for the first 24 hours once it launches on August 13 — via the Epic Games Store. Naturally, one might automatically think that it’s worth a download. It is, but be prepared to notice a few concerns.

A Total War Saga: Troy is inspired by The Iliad, Homer’s epic tale of the Trojan War. The conflict which lasted a decade saw the rise and fall of legendary heroes Achilles, Hector, Paris, Agamemnon, Odysseus, and many others. It was also interwoven with mythology what with the capricious whims and the machinations of the gods, as well as a deep understanding of Greek culture and veneration for the past.

Creative Assembly’s offering, meanwhile, relies on a “truth behind the myth” approach (I’ll talk more about this later). There’s a combination of fantasy, mythology, and the reality as unearthed by historians and archaeologists throughout the centuries. 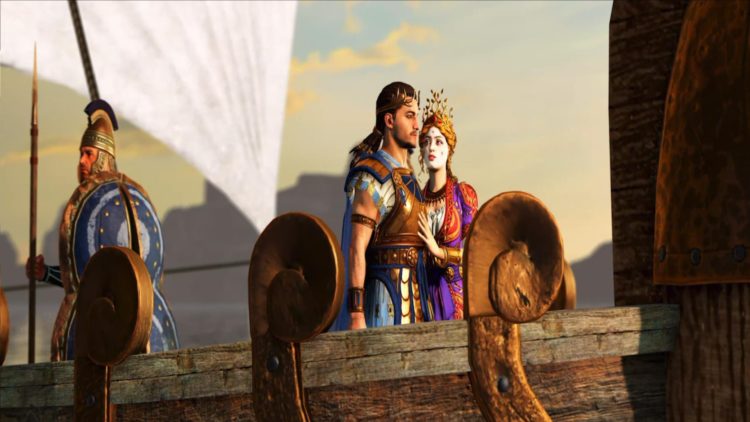 They can be your heroes baby

A Total War Saga: Troy manages to pull off nuances and character depictions with flying colors. Your legendary lords/characters, known in Troy as “epic heroes,” have unique in-game mechanics and features to differentiate each leader from the rest.

For instance, King Agamemnon of Mycenae and leader of the Greek host can quickly vassalize other factions like he’s the Bronze Age’s version of Total War: Three Kingdoms‘ Yuan Shao. In turn, this leads to additional income by way of “The Lion’s Share” unique mechanic. Achilles, meanwhile, alternates among his many mood swings (a great characterization, mind you) resulting in different effects throughout the campaign. The greatest warrior in the land also focuses on defeating other champions (sort of like Lu Bu).

Other leaders include the Princes of Troy — Hector and Paris — two brothers who compete with each other for King Priam’s favor. The former has an extra mechanic, the “Assuwan League,” where he needs to shore up his alliances with other factions. The latter, meanwhile, has to move Helen from settlement to settlement to gain boons. You can also play as Aeneas (who can commune with the dead), Odysseus (who focuses on espionage and subterfuge), Menelaus (who can obtain the units of other factions that he’s allied with), and Sarpedon (who likes to focus on trade and resource gathering). 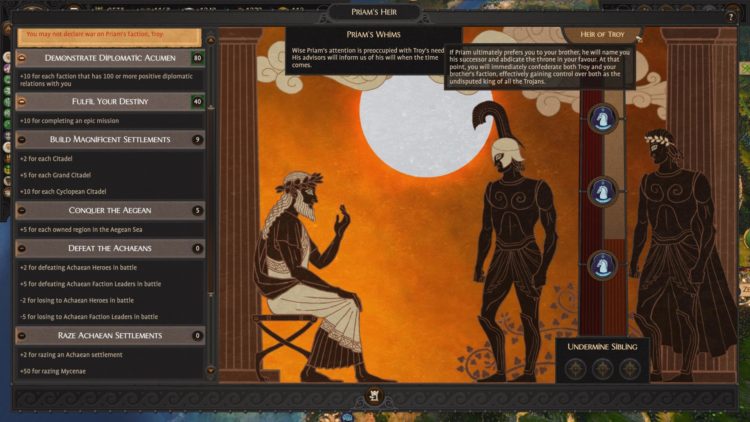 There are two ways to win the grand campaign in A Total War Saga: Troy. There’s the “Total War victory” (aka. domination). Then, there’s the “Homeric Victory,” one where you follow a lengthy “epic mission” chain. Think of these as tailor-fit questlines for each specific leader.

Of course, the only way you’ll succeed is if you master Troy‘s barter and resources system which includes food, wood, stone, bronze, and gold. These have various uses such as food being spent when recruiting troops, although many armored units also require bronze. Most low-tier buildings only use wood, but higher-tier ones might need stone. Lastly, there’s gold which is used for several functions such as praying to the gods, rededicating temples, and enlisting elite troops.

As for bartering, A Total War Saga: Troy relies on a system that lets you trade resources even for several turns and with extra diplomatic treaties involved such as non-aggression pacts, alliances, or territories. It’s akin to what you’ve seen in Total War: Three Kingdoms. Unfortunately, I also encountered a particular issue with bartering. It seems that you could end up cheesing or exploiting resource gains so easily — such as a single bushel of food netting you 50+ diplomatic favor — that it makes the challenge moot. Worse, the AI sometimes does this too and it’s possible to see minor factions with thousands of food within the span of a few turns. 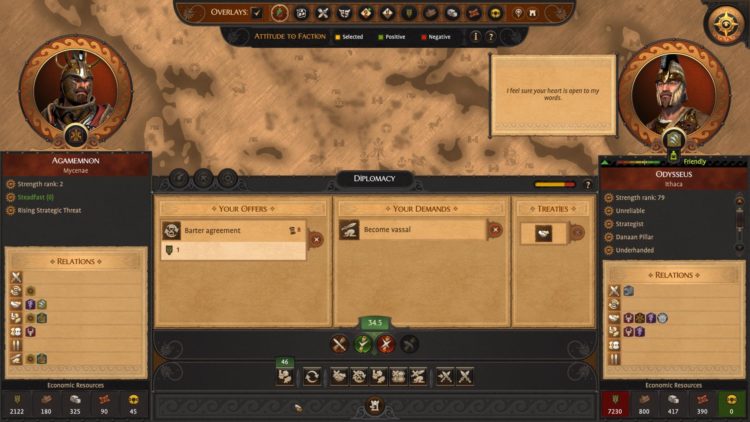 When it comes to battles, I feel that this is where A Total War Saga: Troy starts to falter. While it’s true that generals obtain new skills, the heavier focus on infantry combat makes for a rather dull affair.

The game does have ranged units like slingers or archers, cavalry, chariots, and even man-sized “mythological creatures” (more on these in a while). Sadly, most of the battles you fight will get bogged down with the usual array of massed infantry and eventual blob (with some flanking and skirmishing involved). Given that many high-end units, including mythological creatures require rarer resources, you’ll only see unit variety much later in your Troy campaigns.

It’s hard to fault Creative Assembly here because of the limitations of the era and its scope. You’re not going to find guns, cannons, or trebuchets. Instead, you’ll mostly have a staunch line of spears — and that can be a little too boring the longer you play. At the very least, generals can challenge one another in battle and you’ll often see duels play out — it’s unlike Three Kingdoms‘ system so troops can still take potshots. 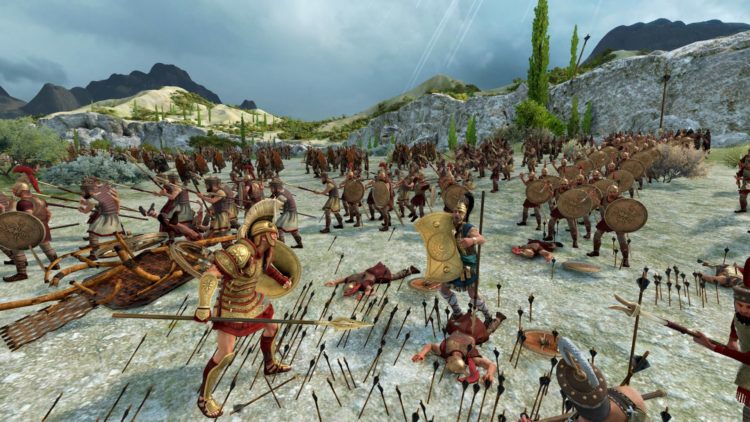 A Total War Saga: Troy – The truth behind the myth

As noted earlier, Creative Assembly went with a “truth behind the myth” approach. A Total War Saga: Troy isn’t a purely historical title, but it’s one that has a few fantastical elements thrown in. The mythological creatures aren’t monstrous, misshapen forms. Rather, they’re dudes and dudettes wearing strange, wild clothing that separate them from your helmet-and-breastplate-equipped rabble. They’re the cosplayers of the Bronze Age.

The Cyclops has the skull of an elephant for its helmet whereas the giants are a foot taller than regular soldiers. Gorgon epic agents have dead snakes for their dreadlocks, centaurs are horsemen covered in warpaint, harpies are adorned with shredded leather pieces, and sirens walk around in an alluring dress. These are meant to be representations of “what could they have been” and “what inspired those legends of yore” as opposed to depicting them as beasts or otherworldly beings. 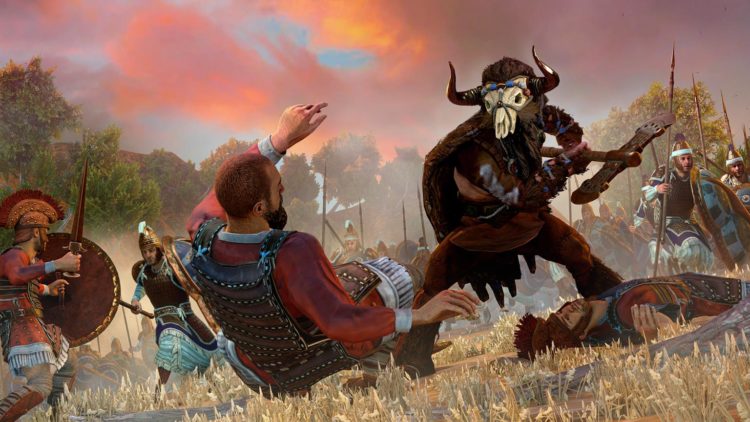 As for the Greek pantheon, they don’t necessarily take on the form of humans. Instead, they’re part of the Divine Will mechanic that lets you initiate hecatombs or offer prayers. While I would’ve preferred an apparition of Apollo firing a deadly arrow or a spirit of Athena shielding her chosen, the Divine Will mechanic itself remains an important dynamic in your playthroughs due to providing new strategic layers and synergy.

Still, this “truth behind the myth” approach might be the most controversial point of contention that A Total War Saga: Troy will face. The inclusion of fictional quirks, understandable because it’s based on The Iliad, won’t please historical purists who want a title that’s simply about Bronze Age clashes. Conversely, the lack of actual gargantuan beasts and deities laying waste to armies wouldn’t please those who are looking for something akin to Total War: Age of Mythology. 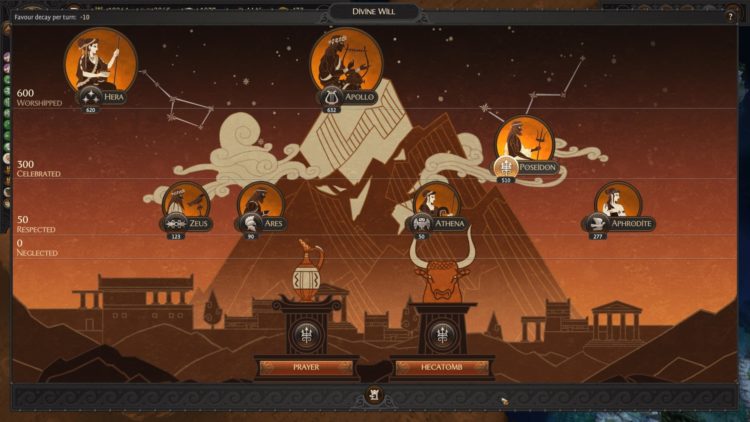 Still, I do have other misgivings while completing A Total War Saga: Troy‘s campaigns. First, there’s the “Antagonist” mechanic, a challenge where a faction you’ve fought against becomes an “endgame” rival (going so far as to initiate a “scorched earth” policy whenever you capture its settlements). On paper, that sounds like a decent feature similar to Shogun 2‘s Realm Divide, Rome 2‘s Civil War, or Three Kingdoms‘, uh, Three Kingdoms formation. Regrettably, it can prolong your playthrough if your antagonist happens to be a main/playable faction from the other side.

For instance, Odysseus of Ithaca became my antagonist during my Hector campaign. By then, he had managed to confederate with the other playable Greek lords. I couldn’t complete the victory conditions until I eliminated Ithaca — conquering the faction was one of the requirements for the Homeric Victory and defeating my antagonist was a requirement for the Total War Victory. I felt like I wasted many turns while trying to find his last settlement which was on the lonely island of Trinacria.

Speaking of the Homeric victory and its epic missions, these don’t seem as structured as, say, the concepts we’ve seen in Three Kingdoms or Warhammer II. You could finish an epic mission, but you won’t know when the next quest step would appear. I’m still uncertain if this is triggered by a specific turn, a particular in-game occurrence, or if it’s purely random. Some events also lead to confusing and odd moments when they don’t align with the current status of your campaign. For instance, you might get a dilemma about a Greek soldier attacking Troy’s walls even though your Trojan pals are already rampaging all over Athens and Sparta.

Likewise, the motivation system can be a hassle to micromanage. Your recruited generals can have their motivation fluctuate due to a variety of reasons (maybe you’re devoted to a god or goddess they don’t like, or you’re not razing or sacking settlements as often). Combine this concept with classes and subclasses of your generals, and you could find a decent combatant who doesn’t perform as well you’d hope because you’re not meeting some requirements. 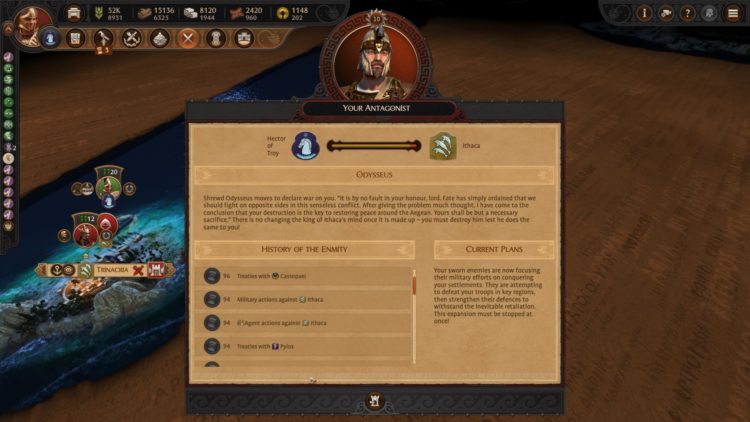 Now, when considering the technical aspects, I don’t have major complaints. A Total War Saga: Troy runs fine at 4K resolution, but I did need to use the “high” preset instead of “ultra” just to get decent framerates. Visually, the game’s distinctive art style manages to appeal and fascinate with the campaign map’s design reminiscent of Classical Era paintings on Greek vases and amphorae. Battlefields, meanwhile, are rendered in slightly muted colors contrasting with the brightness of the sky and background to create that unique cinematic feel. The artistic flourish, though, ends once you zoom in closer since unit models look a tad outdated.

Additionally, the turn times are as blindingly fast as Warhammer II‘s, though slight delays occur once you’re at war with multiple factions and the AI spams several agents. Lastly, the biggest downside as an Epic Games exclusive, is that the launcher has no built-in screenshot function. Relying on different means is more cumbersome than you think as mentioned in our technical review.

In the end, A Total War Saga: Troy still managed to entertain me for a while. This is definitely a game that you should download immediately within the first 24 hours simply because it’s free. As a separate purchase, however, you might want to wait for a few tweaks and balancing. 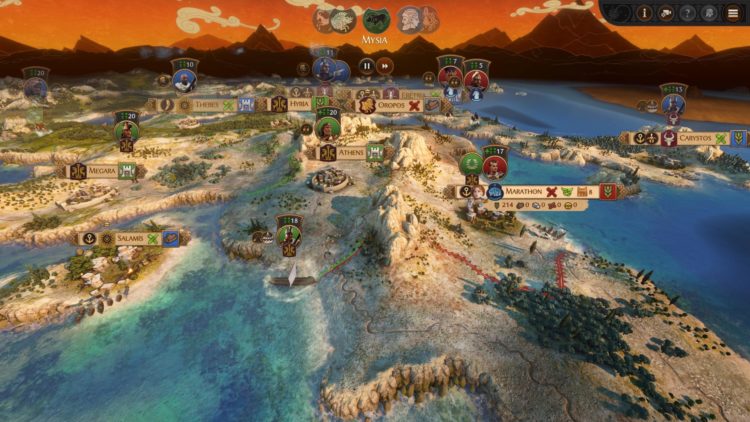 Creative Assembly's newest title as part of the Saga spinoff/class of strategy games.
7.5

A Total War Saga: Troy is limited in scope and unit variety. Similarly, its middle-ground approach between a purely historical title and one that's filled to the brim with mythological elements might not please everyone. Still, it manages to entertain owing to unique faction leader mechanics and Divine Will strategies. Grab it while it's free, but wait for a few fixes and balancing tweaks if you're planning on buying it separately.