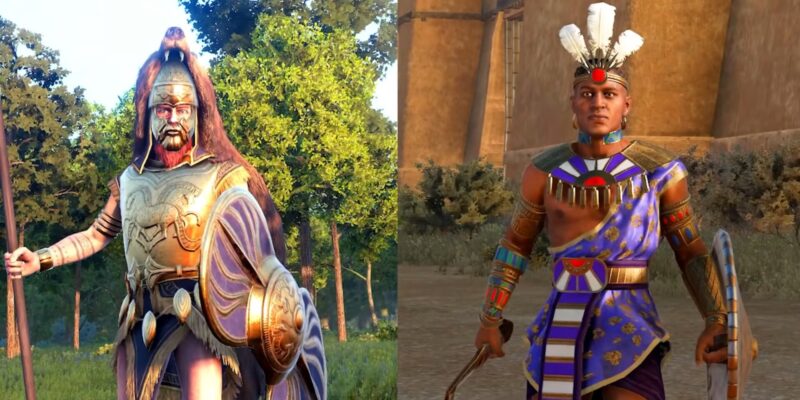 When the Mythos expansion came out a couple of months ago, I thought that was it for Total War Saga: Troy. Indeed, I had considered it the complete experience for those who want the most out of the game. Little did I know that we’d see two more characters with the new Total War Saga: Troy – Rhesus & Memnon DLC. It releases today via Steam and the Epic Games Store.

I’ve delved further into the campaign, preferring to choose the “Truth Behind the Myth” playthroughs. This is to ascertain what either epic hero brings to the table, assuming someone doesn’t own Mythos and they’re not keen on trying Historical Mode.

The Total War Saga: Troy – Rhesus & Memnon DLC adds two leaders for the Trojan forces (as if they needed more backup). Memnon, King of Aethiopia, lent his support to Troy years after the war began. Considered equal to Achilles in strength and valor, he was nonetheless vanquished by the famous Greek warrior in one-on-one combat.

Memnon’s inclusion makes sense, as he was one of the true heroes of the age. Rhesus, meanwhile, made me scratch my head a bit. This King of Thrace arrived late in the war. Owing to the schemes of Diomedes and Odysseus, he was killed by the former while he was staying in his camp. Basically, he died without even going to battle, which makes his inclusion a bit odd. Then again, I presume that this was done to give the Greeks another opposing force to the north (which tends to be filled with forgettable minor factions). 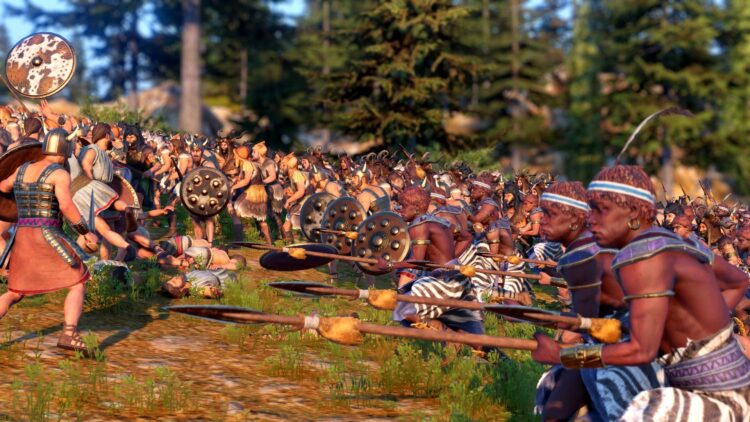 I found Memnon’s campaign in Total War Saga: Troy – Rhesus & Memnon more engaging than Rhesus’. As a horde faction akin to Penthesilea of the Amazons, Memnon’s armies cannot occupy settlements (only sacking and razing are allowed). Razing nets a lot of resources, subsequently turning cities into free real estate that can be colonized by the AI. It did happen so frequently that Odysseus, who was the only Greek leader not at war with me, swooped in to capture those lands. Needless to say, he became my Antagonist later in the campaign.

One of Memnon’s unique mechanics is called Pharaoh’s Servant. By constructing specific buildings or researching certain techs, you unlock territories held by the Pharaoh. You don’t actually fight in those lands as they just appear on a map in a special panel. You can then activate these to add units to your recruitment pool. As such, it’s possible to have full-stack armies in one go. Memnon definitely needs that boost since horde armies cannot reinforce one another. At best, you’ll rely on supporting armies to lure hostiles, with Memnon’s main army lying in wait with an ambush.

Apart from Pharaoh’s Servant, Memnon also has the Camp Followers mechanic since he can’t recruit normal agents (just epic variants). The Camp Followers act as buffs or special actions tied to each army. In some cases, it’s possible to instantly cut down a rival general’s HP in half, cause a defending force to sally out of a city, or disable a settlement’s towers. 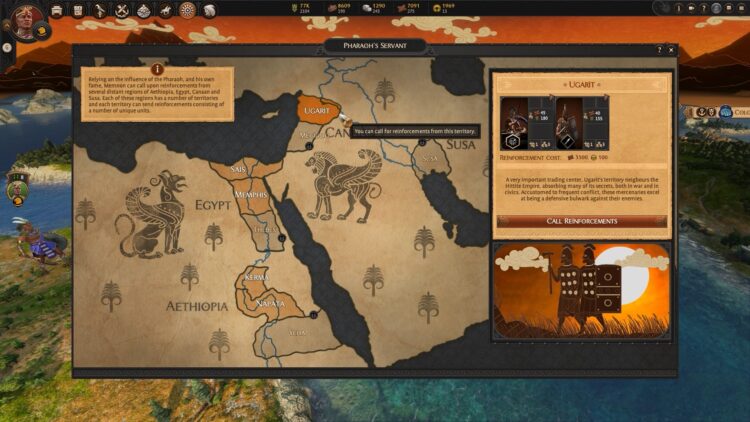 More fun with the King of Aethiopia in A Total War Saga: Troy

Another key factor that made me like Memnon’s campaign was that compared to previous leaders I’ve picked in Total War Saga: Troy, Memnon’s epic missions fired early on. I got my first epic mission on turn 2 and the rest in subsequent turns upon finishing the previous requirements. This allowed for rapid progression all the way to a Homeric Victory. I wasn’t left wondering when I’d see epic missions again, which seemed to be one of the more egregious issues the game has had since it launched.

Unfortunately, there were also a couple of issues that I’ve noticed. First, it’s that Sarpedon seems to declare war on a whim (I’ve had this happen despite restarting). It’s very strange, too, given that one epic mission requires you to gift him a lump sum of gold to improve relationships. The second was that a Homeric Victory goal required you to raze Pteleon in Pththia (Achilles’ capital). Because the Trojans/Amazons (i.e., Aeneas, Hippolyta, Sarpedon, and Paris) tend to blast through the Greeks easily, Pteleon could be held by one of your allies. In my campaign, it was controlled by Aeneas, so I just DOW’d him and captured the city to obtain a Homeric Victory. 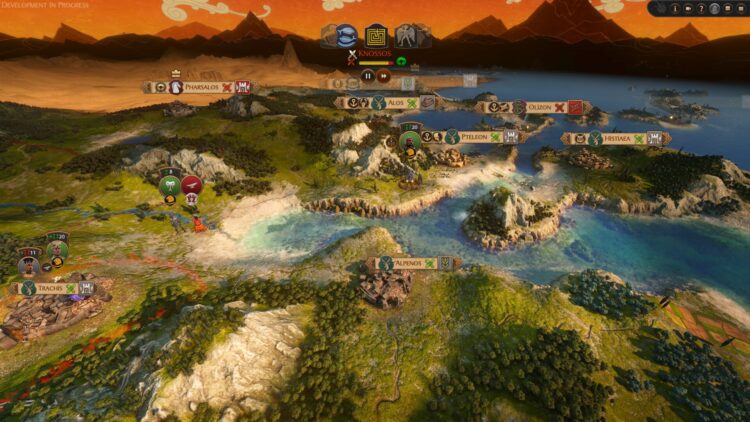 Although Rhesus was an afterthought in Greek Mythology, he does have unique mechanics in Total War Saga: Troy. His Thracian Rituals feature uses Devotion as a resource. This provides buffs related to Greek gods, army bonuses, settlement improvements, and high-tier unit unlocks. Likewise, there’s a slight similarity with Penthesilea and Memnon with Rhesus’ Countless Host. Although Rhesus isn’t a horde faction leader, he’s able to spawn full-stack armies of Thracian barbarians. Sadly, they won’t be able to reinforce each other (or your regular armies). This will only be possible once you’ve increased your Countless Host level by capturing settlements in forested areas.

Rhesus’ playstyle primarily relies on vicious charges as most of his units don’t have shields, though you can opt to run over hostiles with your chariots, too. Perhaps the main downside was that it’s hard to guess Rhesus’ epic mission triggers. For instance, most other leaders obtained their first epic mission on turn 8. In Rhesus’ case, I got it on turn 12; his third epic mission appeared six turns after I completed the second.

All in all, the Total War Saga: Troy – Rhesus & Memnon DLC just gives you more reasons to continue playing the game. If you’re still interested in beating down the Greeks, then you’ve got two new leaders to try out. 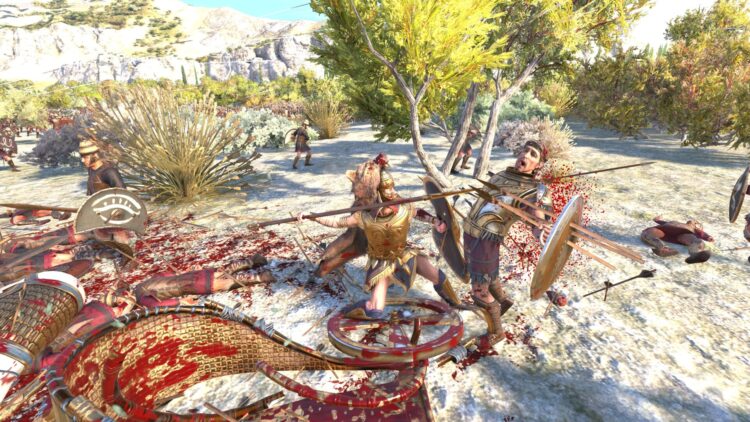