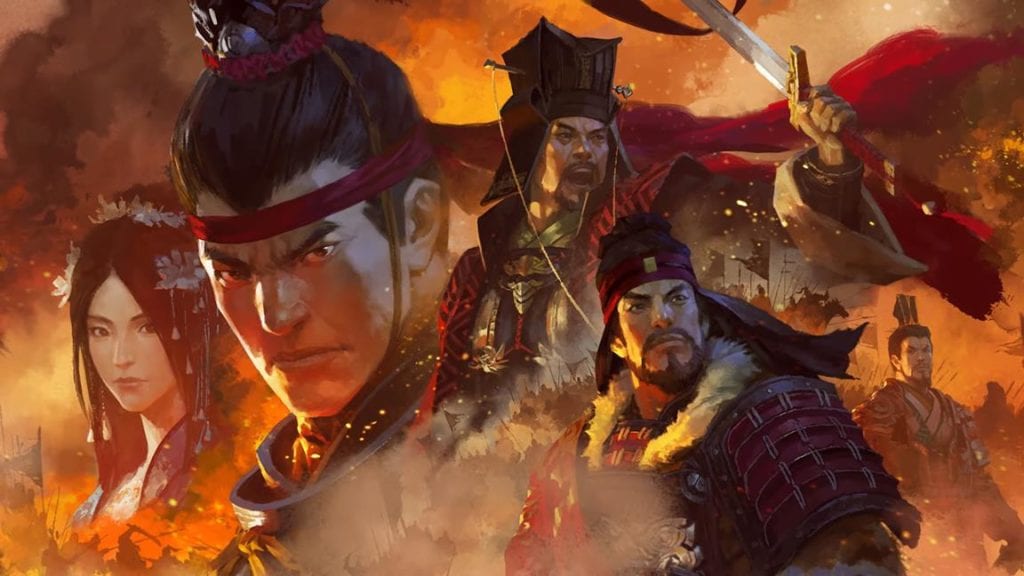 A World Betrayed is the newest expansion for Creative Assembly’s Total War: Three Kingdoms. The scenario adds Lu Bu and Sun Ce as playable faction leaders, while a free update adds the FLC Yan Baihu. Is it worth your while? Let’s find out in our official review.

Chaos once again engulfs the land in Total War: Three Kingdoms – A World Betrayed. It’s now 194 CE, 10 years after Mandate of Heaven and four years after Total War: Three Kingdoms‘ original campaign. Lu Bu has cut down his adoptive father, the tyrant Dong Zhuo. Likewise, Sun Ce mourns the loss of his own father Sun Jian. Elsewhere, White Tiger bandit Yan Baihu and the lords of the Southlands stand in the way of his destiny.

All in all, 13 faction leaders are playable in A World Betrayed‘s scenario. Fathers and father figures are lost, and even the Han Emperor has become embroiled in the bitter rivalries of generals looking to make him a puppet. That’s the free-for-all sandbox that awaits you almost from the get-go. You’re no longer tied to imperial alliances or coalitions against a tyrant. As such, rulers can decide on who they end up allying or warring with. 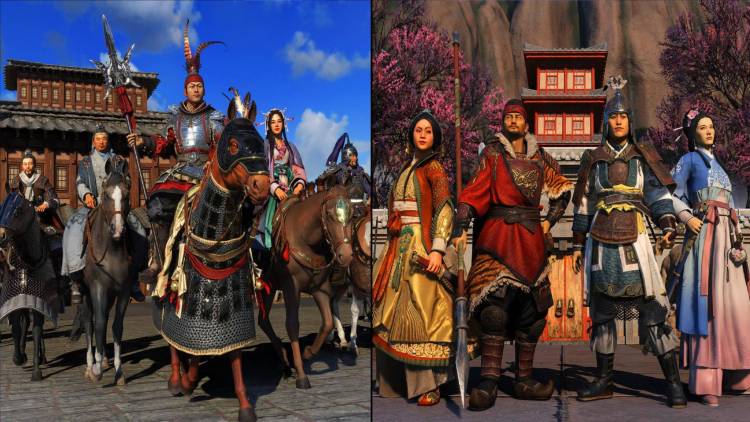 Since we’re talking about the evolving story, we should also discuss scenario transitions. I tested the original campaign and chose to “follow the story” for Dong Zhuo’s and Sun Jian’s playthroughs. Sadly, there were no proper transitions once it was Lu Bu’s and Sun Ce’s time to shine.

In Dong Zhuo’s case, you didn’t have a choice to break away as Lu Bu. As for Sun Jian, his death event fired early (which I accepted), but Sun Ce took a while to come of age. When he did, his death event (from the vanilla game) also ended up occurring. In short, neither of the two would end up with A World Betrayed‘s mechanics even though you’re past 194 CE. 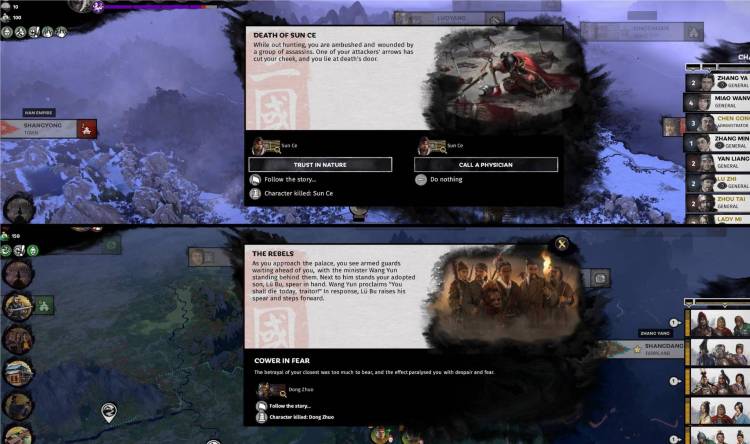 While I tend to separate content added by a free update, I’d be remiss if I didn’t discuss patch 1.5. This free update, available to all Total War: Three Kingdoms players, provides a lot of changes to the campaign.

You’ll find over a dozen unique portraits and character models such as those for the Qiao sisters, Chen Gong, Gao Shun, Zhou Tai, Li Jue, Wang Lang, and more. City population, assignments, and espionage have also been tweaked, giving you more systems to play with. The overhaul to bandit factions is also a welcome change and the mercenary contracts (available to bandit leaders and Lu Bu) is an intriguing new concept. 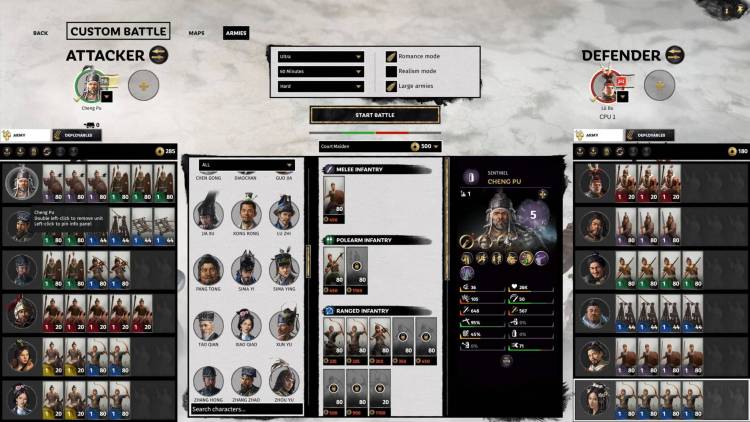 The biggest flaw, however, is the change to the loyalty system. Previously, it was the rather bland “give gold to an officer to increase their loyalty” method. This time around, you’re assigning them ranks. It’s a great idea on paper. In practice, though, it can be a little too detrimental.

There are several officer ranks unlocked once you start your Total War: Three Kingdoms – A World Betrayed campaign, but several still have silly requirements just to be made available. Sun Ce even gets shafted by this. Given that half a dozen missions provide him with his father’s veteran generals, they’ll all clamor for higher positions and become dissatisfied within a few turns. You’ll find yourself running out of ranks to hand out as you continue progressing. 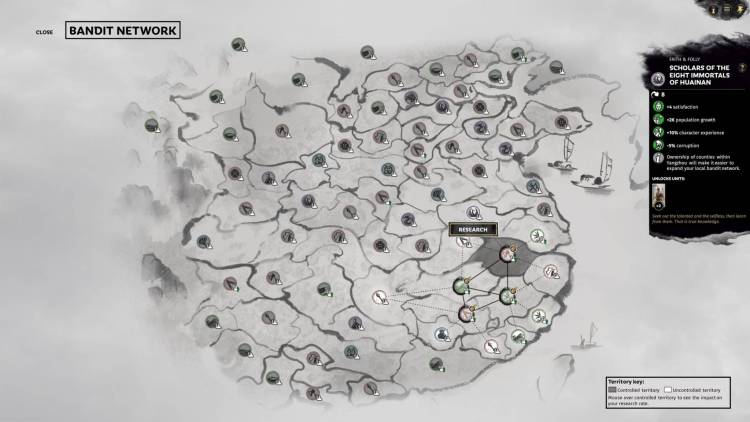 Now, Sun Ce requires an extremely aggressive playstyle. You must fulfill the Legacy of Wu ambitions while increasing Reckless Luck levels. Otherwise, the Little Conqueror would end up dead. With several minor lords ruling the Southlands, a Sun family playthrough will no longer be on “autopilot,” that’s for sure.

I do have to address a couple of noteworthy issues in my Sun Ce campaign. First, there’s a chance that event officers won’t join you. They were probably hired by someone else and they ended up getting killed. Second, it’s the fact that when the Qiao Sisters do join your faction, they aren’t automatically married to Sun Ce and Zhou Yu. Still, these are quite minor compared to the aforementioned officer loyalty/ranks qualms. 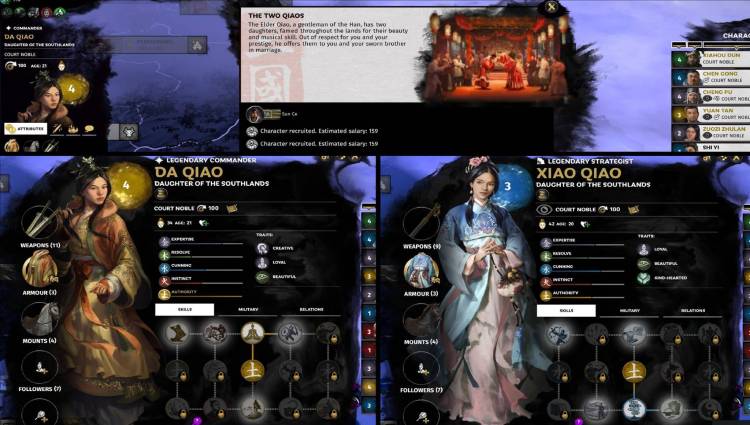 Like Sun Ce, Lu Bu also requires aggressive expansion. His Momentum mechanic — increased by battles and duels won — provides benefits to campaign movement and satisfaction. However, those victories themselves confer a malus to officer loyalty and diplomatic relations. As such, you’re constantly at war with a lot of rulers. A Lu Bu playthrough is just absolute mayhem, one that’s a treat for Total War: Three Kingdoms fans.

Rounding out Lu Bu’s quirks is the Greatest Warriors feature. Like the Han Dynasty’s most swole Pokémon collector, certain unique heroes that Lu Bu defeats will give you permanent buffs. Unfortunately, its poor implementation sours the experience a bit. 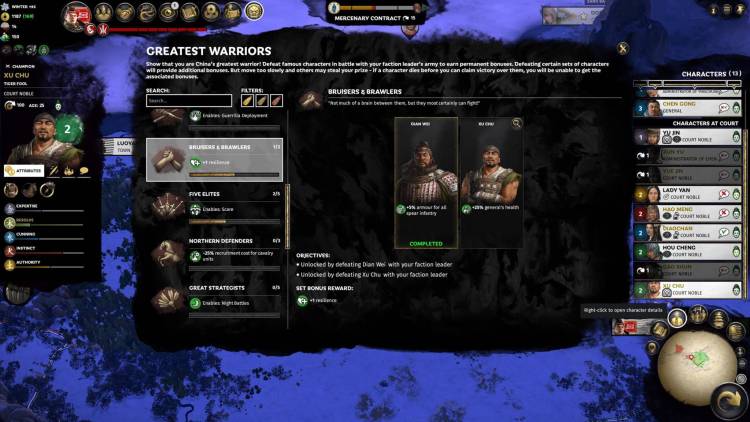 At times, you won’t even reach a rival’s base before the AI trounces them, or you’ll find yourself having to redeploy in multiple areas in A World Betrayed‘s campaign map. It also doesn’t count if officers joined you via recruitment or annexation. Imagine defeating Dian Wei while he’s part of Cao Cao’s army, only for Xu Zhu to join your faction with no means of getting the task completed. Heck, imagine having your own lieutenant Zhang Liao as one of the requirements for another tally.

It’s like the game expected you to banish or ignore these unique officers so that you can end up meeting them on the battlefield instead. There were times that this feature made me shout “Aiyah! Fengxian!” like an exasperated Chen Gong. 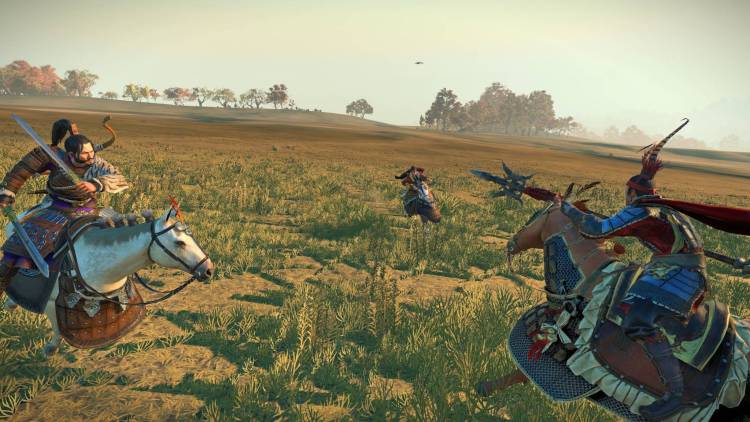 A World Betrayed: The final verdict

Total War: Three Kingdoms – A World Betrayed isn’t perfect. It’s a little rough around the edges. Creative Assembly still needs to work on scenario transitions and new leaders taking the reins of their respective factions. Similarly, the Han Emperor’s escape isn’t properly fixed. He does escape the clutches of Li Jue and Guo Si, and eventually Yang Feng and Li Xian, but, he tends to jump to and fro various rulers after that regardless of the faction’s prestige. Speaking of Li Jue and Guo Si, the former should’ve been added as an actual playable lord given his importance during this period.

Despite these shortcomings, however, I still enjoyed what Total War: Three Kingdoms – A World Betrayed presented. Firstly, outside of the changes to officer loyalty/ranks, I’m appreciative of the improvements added by patch 1.5; the bandit factions rework alone is miles ahead of whatever Mandate of Heaven did for Zhang Jiao and the Yellow Turbans.

Secondly, the thrills and chaos made each playthrough refreshingly unpredictable. While I enjoy the history and setting of the Three Kingdoms era, with all the events and dilemmas that nudge you along certain paths, it’s also worth recognizing how an evolving sandbox keeps you on your toes one turn after another. Truly, A World Betrayed is the Total War: Three Kingdoms expansion that captures the spirit and dynamism of the time period. 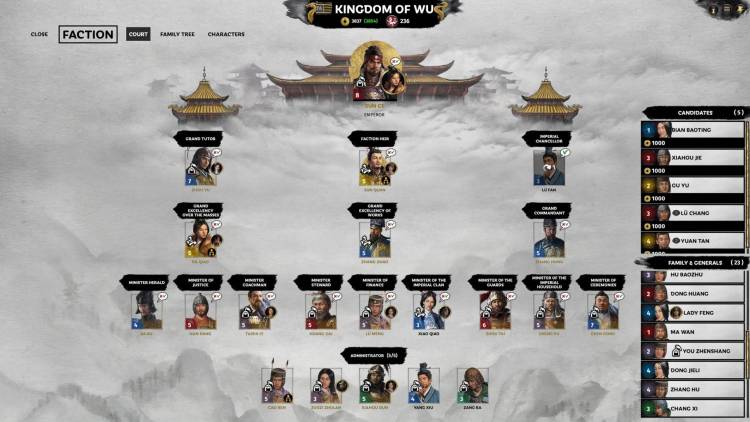 The third expansion for Total War: Three Kingdoms adds Lu Bu and Sun Ce and is set in 194 CE. The tyrant Dong Zhuo has fallen, and warlords make their move to capture or become the emperor.
8

Although there are some questionable mechanics and odd issues on the side, Total War: Three Kingdoms - A World Betrayed manages to excite and challenge you, all while adding refreshing features via a free update. If you only need to choose one Total War: Three Kingdoms DLC, A World Betrayed definitely surpasses Mandate of Heaven and Eight Princes.