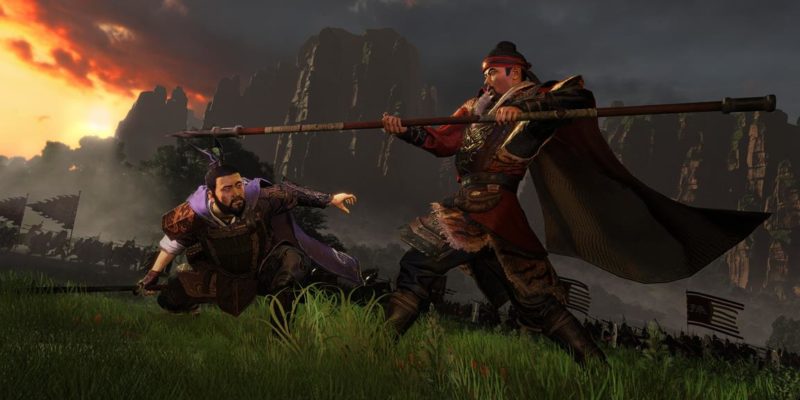 The start of Sun Ce’s campaign in Total War: Three Kingdoms – A World Betrayed can be very hectic. You need to watch out for multiple faction mechanics such as your Reckless Luck status and Legacy of Wu objectives. You’ll also have to strike a balance with regards to your income, officer acquisitions, and rank-ups that can lead to dissatisfaction. Oh, and you have to beware of Yuan Shu since multiple events and dilemmas will involve his vassalage of Sun Ce. 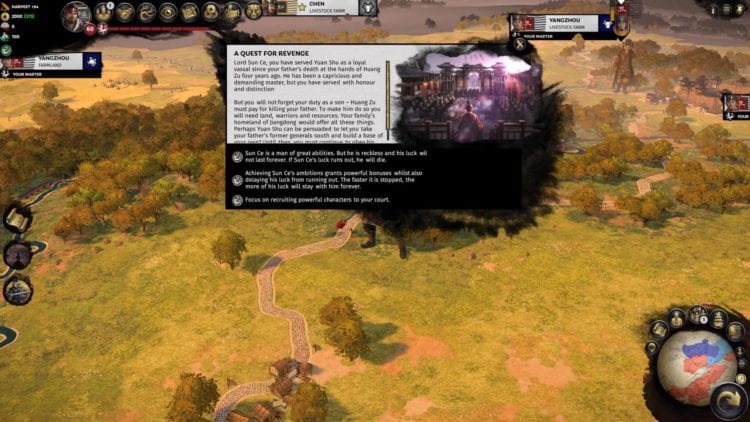 Sun Ce is quite a mama’s boy. That’s because the only officer in your court is Lady Wu. We’ll get a lot of new characters in a few turns, so get set for that — and your income going down the drain. 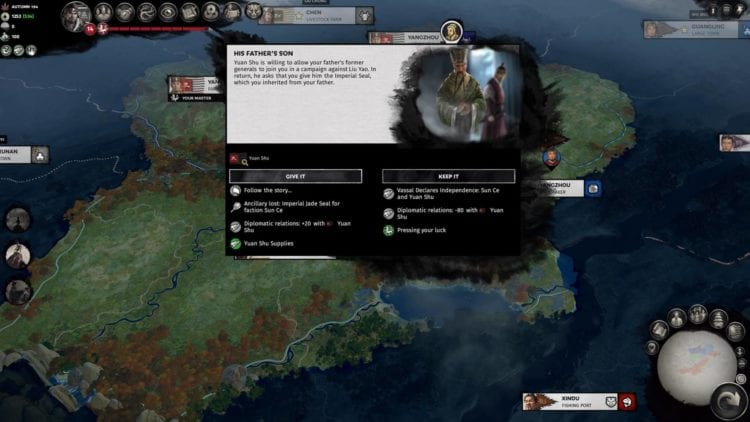 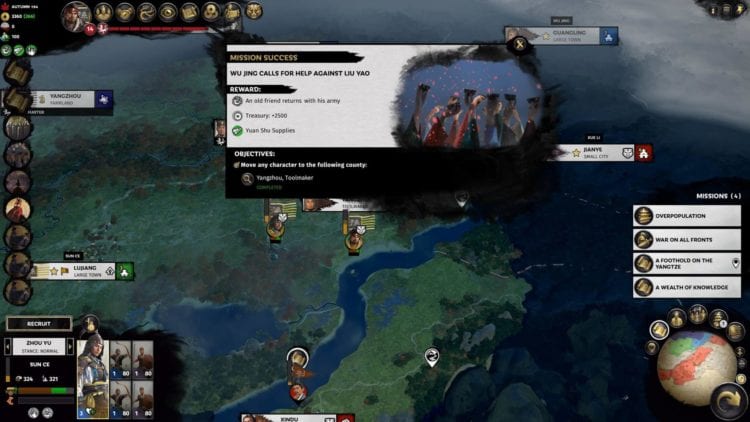 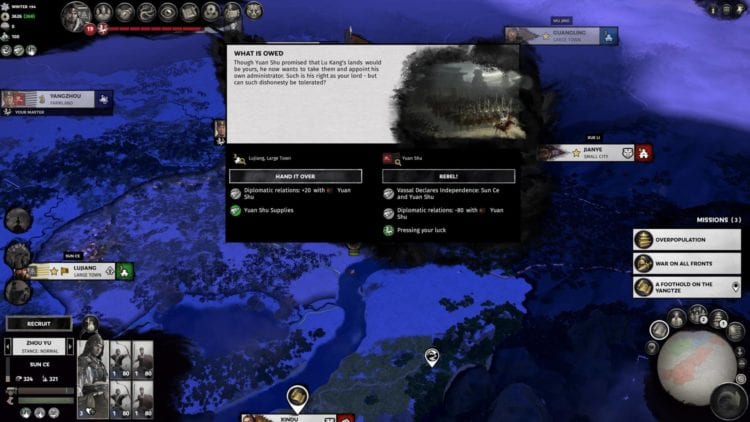 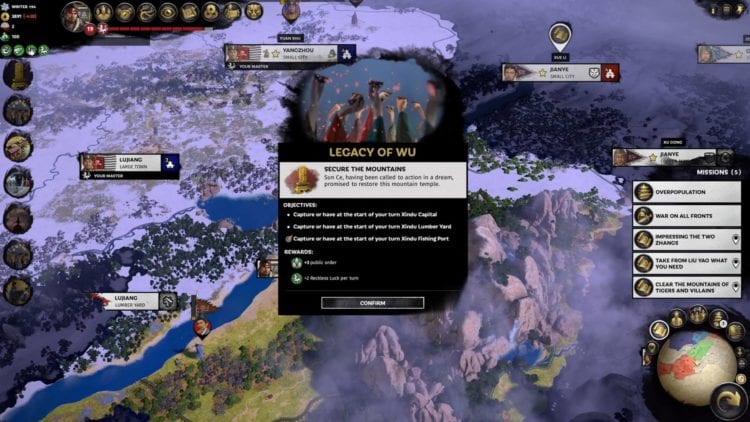 Bug 1: There seems to be an odd outcome here where Poyang copper mine ends up in the control of Yan Baihu. You can’t go to war with him unless you ask Yuan Shu for permission, and going to war with Yan Baihu now is also suicidal. If this happens, just reload an earlier save or restart your Total War: Three Kingdoms – A World Betrayed campaign.

Bug 2: It seems the above also prevents Zhou Tai and Jiang Qin from joining since the settlement still needs to be controlled by Liu Yao. 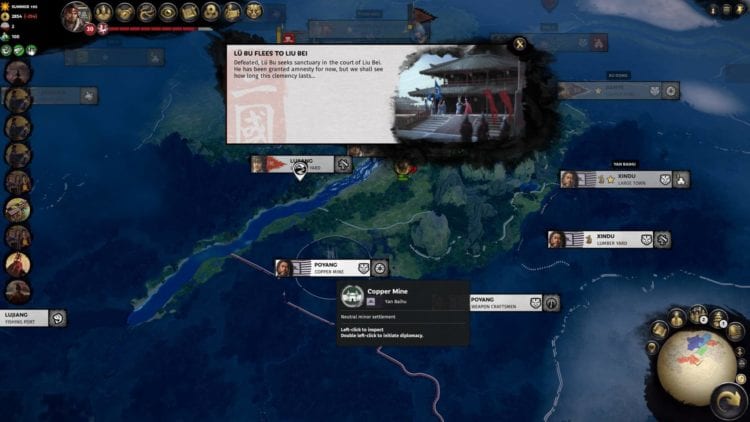 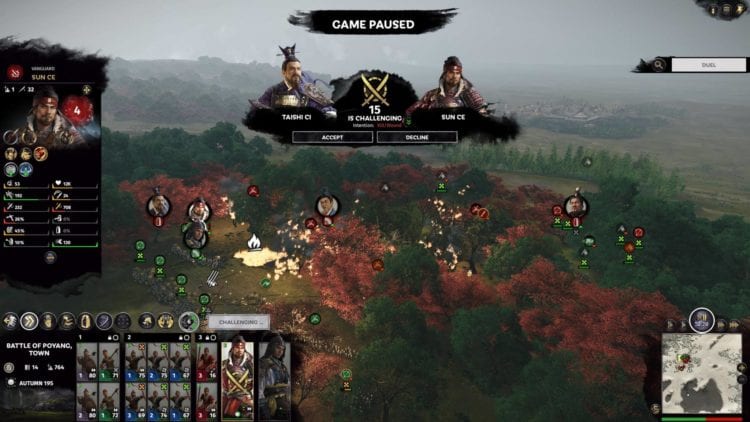 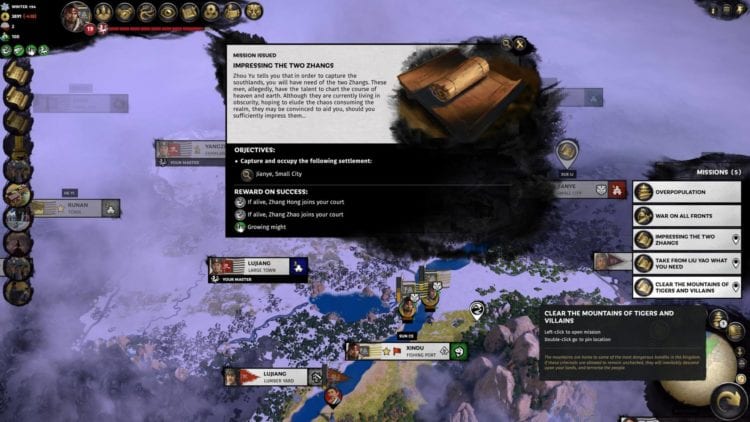 The biggest event in Sun Ce’s Total War: Three Kingdoms – A World Betrayed campaign is none other than silly ol’ Yuan Shu declaring himself emperor. Historically, this did not sit well with the other Han warlords. They all craved power, but they weren’t so emboldened just yet. Sun Ce would actually rebel against Yuan Shu due to the latter’s decision as well.

You can choose to remain loyal, but this will lead to a lot of dissatisfied generals. You’ve already got that problem given that you’re lacking gold and you’ve got so many officers with nothing else to do. Following the story leads to war, but this also gives you additional Reckless Luck for a few turns. You’ll also get the “Price of Ambition” quest where you need to defeat a couple of Yuan Shu’s armies and garrisons, providing you with gold and some campaign buffs. 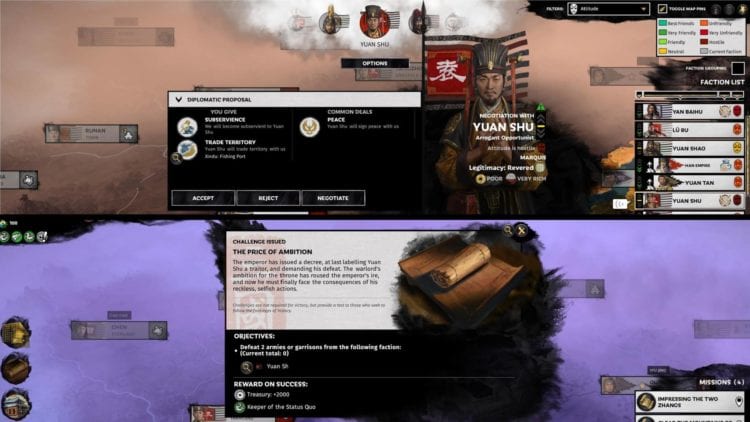 Xindu fishing port will become the main battleground early on, so try to defend it for as long as possible. Once Yuan Shu’s weakened, go ahead and advance northwards. Do beware of Cao Cao’s machinations once you’re close to his territories.

Yuan Shu isn’t your only target, however, since you still need to eliminate rivals such as Yan Baihu. New officer: As you continue to push onwards into Yan Baihu’s territories, you’ll gain control of Xindu capital which will lead to Lu Meng joining you.

Aside from these, you’ll also want additional armies that can capture multiple settlements to the south. There are those held by the Han Empire, the Yellow Turban Rebellion, or other minor lords. Naturally, there are deserted territories that can be colonized. Some of these are required for your Legacy of Wu objectives and others will help boost your faction’s development. 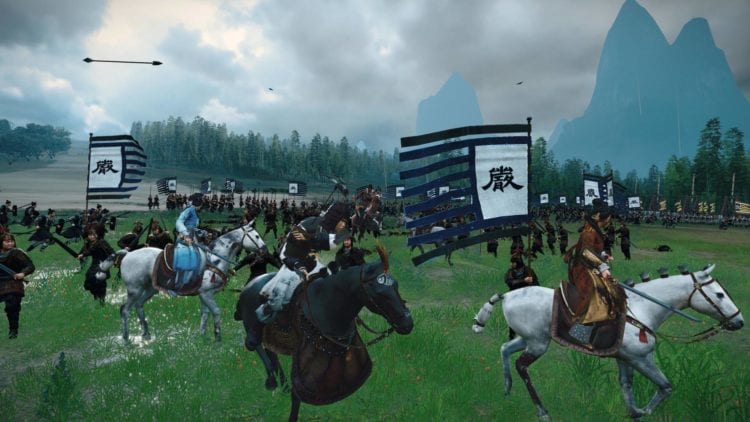 With regards to your Legacy of Wu ambitions, you’ll likely have obtained many of these already throughout your Total War: Three Kingdoms – A World Betrayed campaign. Those such as the capture of Xindu, Poyang, Jianye, Changsha, and the like would lead to several buffs. You should have +10 Reckless Luck per turn (or higher), allowing you to offset the value’s decline and keep Sun Ce alive to old age. There are also some Legacy of Wu ambitions that require certain officers (or officer types) to get leveled up, so use the Shared Expertise mechanic to your advantage. 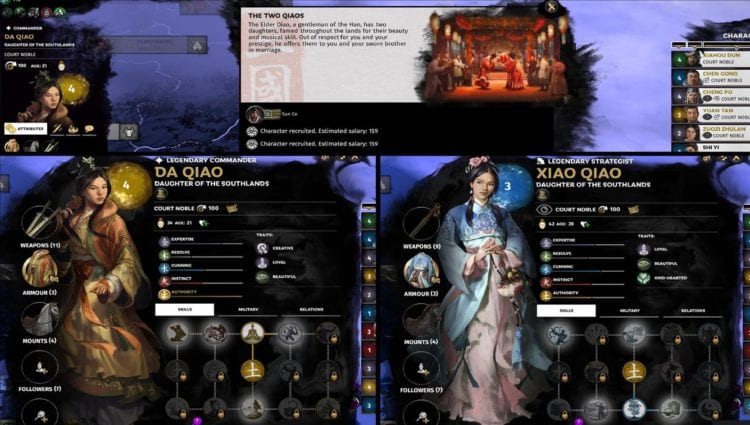 The Kingdom of Wu

With Yuan Shu’s faction in tatters and with dozens of commanderies under Sun Ce’s control, you can now call yourself the Little Conqueror of the Southlands. Once your prestige has increased sufficiently, Sun Ce proclaims the Kingdom of Wu allowing you to use the imperial court system. As mentioned earlier, some of these positions will have level-based bonuses.

Mix and match accordingly and continue your expansion. Sun Ce has already realized his father’s dream. Now, it’s time to achieve his own. 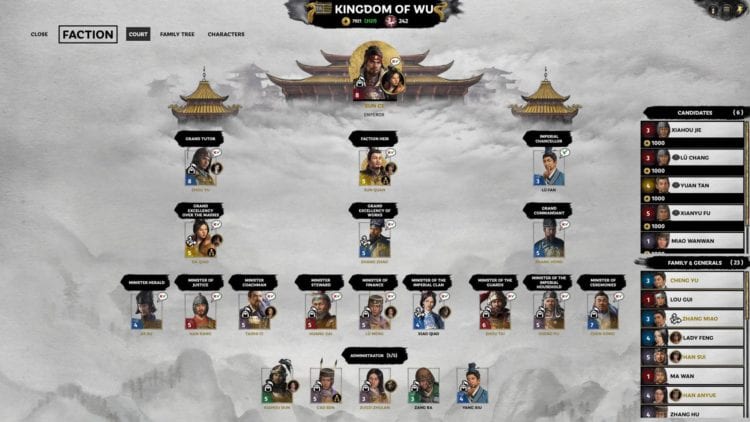