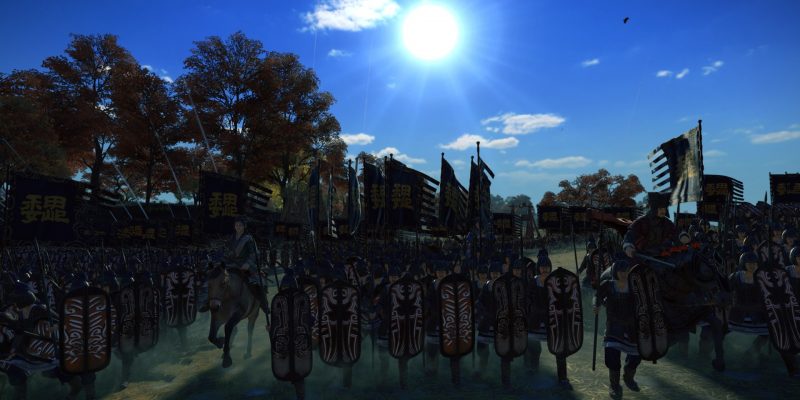 Two warlords, Cao Cao and Yuan Shao, vie for hegemony during the tumultuous years of the Han Dynasty. They may also end up with powerful troops at their command. Here’s our guide to help you with the Northern Army units in Total War: Three Kingdoms – Fates Divided.

The Northern Army units are solely part of the Total War: Three Kingdoms – Fates Divided DLC. Unlike the Faction Council boosts, Faction Rank reworks, or the option to play as Han Emperor Liu Xie, you do need to own the DLC since the units aren’t in the free update.

Note 1: Assuming you’ve reached level 7 already and your rival hasn’t yet, but you still didn’t get the Northern Army, just wait for a couple of turns to get the event to pop.

Note 2: If you’re playing as Cao Cao and you wish to have Emperor Xian lead your faction, try to reach level 7 with sneaky Mengde first. This should let you obtain the ancillaries. I’m guessing that switching to Emperor Xian too early would lock you out of the mechanic. 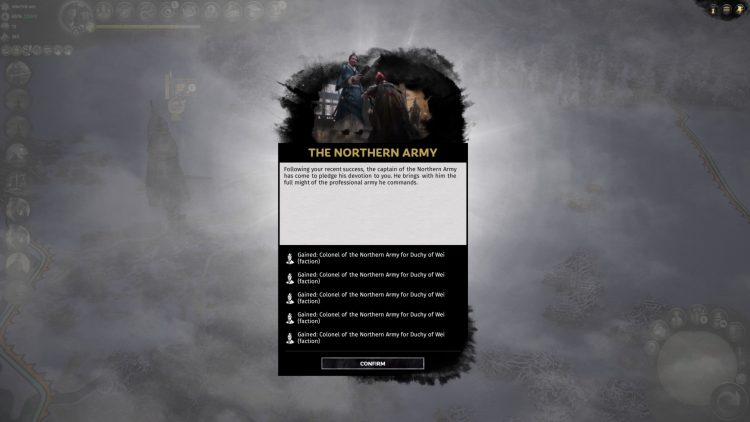 From there, check your ancillaries. You’ll notice five “Colonel of the Northern Army” followers that can be “equipped” on any of your officers. Once an officer has this ancillary, they can start recruiting Northern Army troops. These groups are made up of elite combatants, full-time professional soldiers that are there to defend the Han.

Oh, and do take a look at the effects provided to that general’s retinue:

Note 1: These effects stack. For instance, if three officers equip the ancillaries and they’re in the same army, you can recruit level 10 units. Since the starting rank bonus applies to all types of units, you can grab everything from the lowly peasant band to the toughest imperial troopers (i.e., Defenders of Earth or Protectors of Heaven), all fully maxed out.

Note 2: The Northern Army also ignores an officer’s class (color-coding system). It allows you to have decent spearmen, horse archers, shielded infantry, and more regardless of being a Champion, Vanguard, Commander, etc. Sadly, the Northern Army’s roster doesn’t have siege weaponry, so it’ll be a while until we see non-Strategists with catapults in Total War: Three Kingdoms. 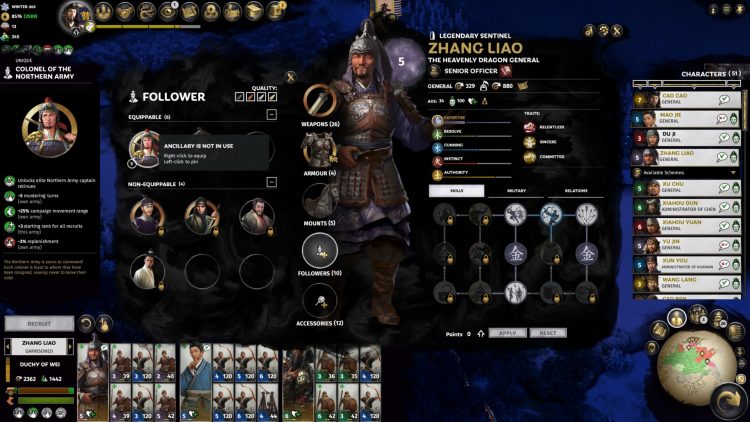 What else can be said about the Northern Army’s system and units in Total War: Three Kingdoms – Fates Divided. Well, do remember that any officer that equips the “Colonel of the Northern Army” ancillary cannot remove it or swap to something else. It’s with them for good until they die.

As mentioned earlier, these ancillaries can only be unlocked by either Cao Cao or Yuan Shao. For the other factions, they can obtain the ancillaries by: 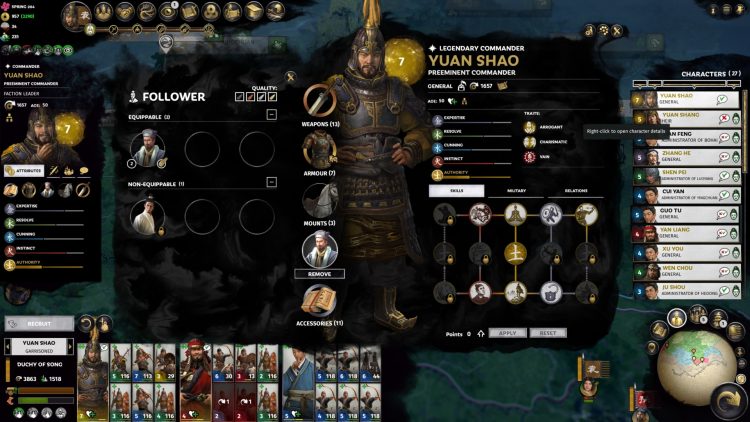 As for the stats of the Northern Army units, one can think of them as mid to high-tier in quality. For instance, the Northern Veteran Sabre Infantry has higher melee attack and armor compared to the Jian Sword Guard and Zhanmajian Infantry. Heck, it even has almost every formation you can think of for the unit type. The only downside is its lower armor-piercing stat.

Meanwhile, the green (spear-type) units are slightly stronger compared to the regular versions. Even the Spear Guard unit disappears, completely replaced by the Northern variant. To be clear, though, the imperial counterpart (Protectors of Heaven) tends to be better. But, options like the Northern Veteran Spears and Northern Veteran Ji Infantry can hold their own and are bolstered further by their low upkeep costs. 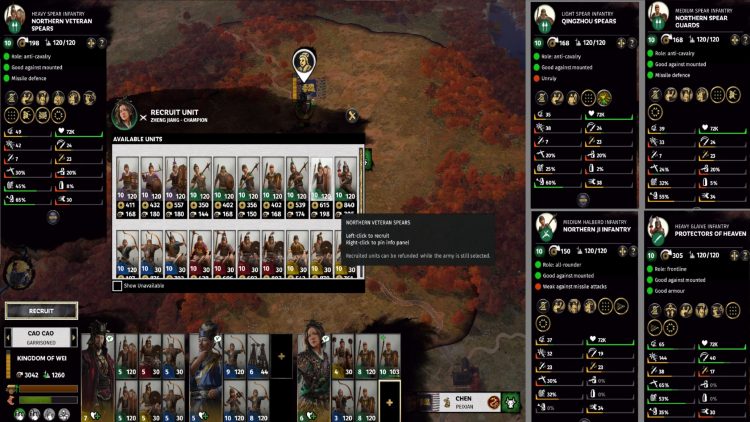 I guess it just boils down to what you’d prefer during the endgame. If you picked the 200 CE start date, then Cao Cao and Yuan Shao would be attaining level 7 by the time they can become King already. As such, it’s really up to you if you want Northern Army troops or the imperial elites.

Lastly, the Northern Army units can be added to a general’s retinue in custom battles. However, that general has to be given higher ranks (i.e., “One-Eyed” for Xiahou Dun or “King of Wei” for Cao Cao). Likewise, you’re limited to just the officers who were historically tied to Cao Cao’s and Yuan’s Shao’s factions. For instance, even though Guan Yu joined Cao Cao’s faction during the battles against Yuan Shao, he’s not really a “Kingdom of Wei guy.” 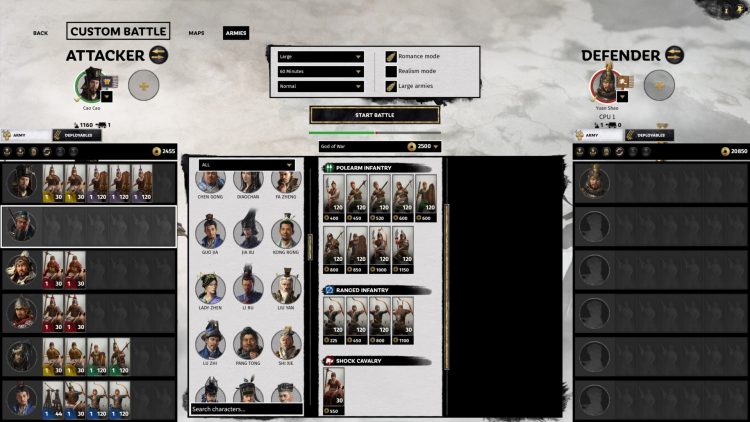 By Tim McDonald14 hours ago
Guides

By Tim McDonald14 hours ago
Guides

How to play the message at a Guardian Outpost in Fortnite