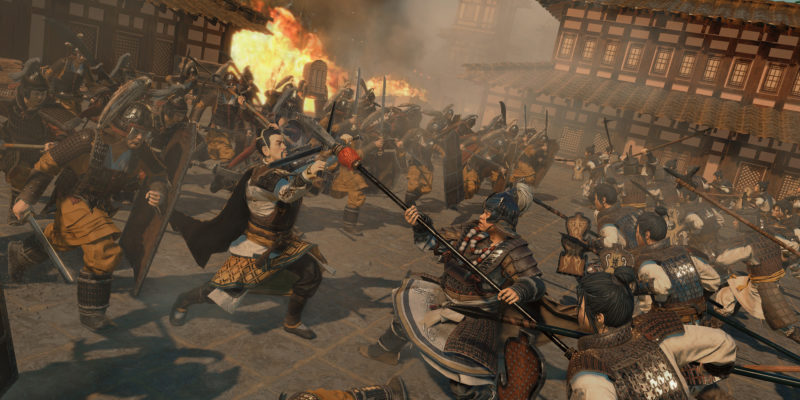 Total War: Three Kingdoms – Mandate of Heaven lets you play as Liu Bei, a distant imperial relative who starts the campaign as a humble sandal maker in the province. It’ll be many decades until he eventually establishes the Kingdom of Shu-Han. This mini-guide covers Liu Bei’s faction mechanics, opening moves, dilemmas, events, and additional tips to help you succeed as “Lord Benevolence.” 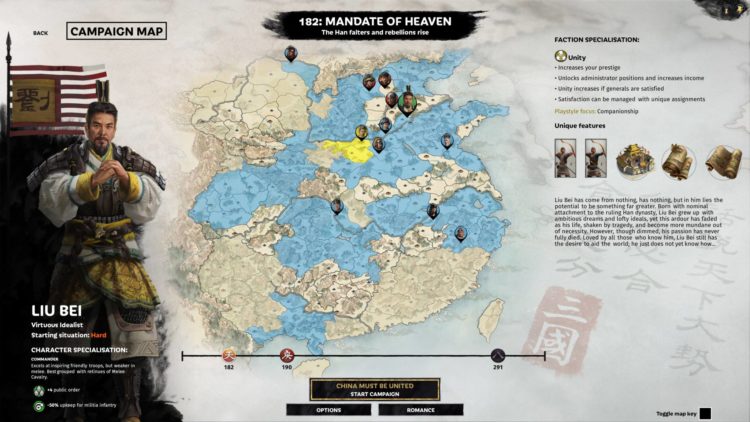 Liu Bei’s unique resource (Unity), his Unification mechanic, and other perks have already been discussed in our previous Shu-Han faction guide for Total War: Three Kingdoms‘ original campaign. These concepts still apply in the Mandate of Heaven expansion.

What needs to be mentioned is his 50% reduction to militia unit upkeep. Even though you start Mandate of Heaven‘s campaign with no land to call your own, you can still recruit officers and units. Combined with the aforementioned perk,  it’s possible to have militia armies that have free upkeep — all you need to do is pay the gold required to deploy them (seen below). Do note that militias aren’t as effective nowadays compared to what you’re used to in Total War: Three Kingdoms, so you’ll probably want to recruit better units down the line or avoid auto-resolving most battles. 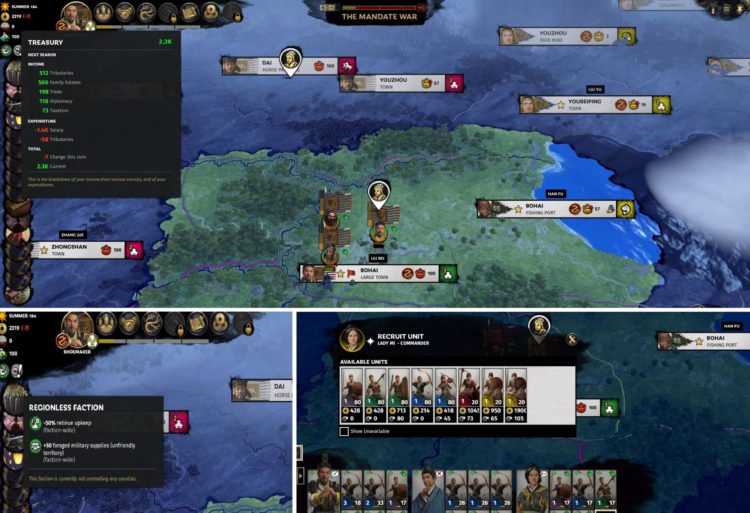 In Mandate of Heaven, old long ears starts alone near Pingyuan. He’s yet to meet his sworn brothers Guan Yu and Zhang Fei.

Liu Bei’s Mandate of Heaven campaign is considered hard according to his lord selection screen, and with good reason: Your first dozen or so turns will require impeccable timing, stance-switching, careful battles, and a bit of luck. 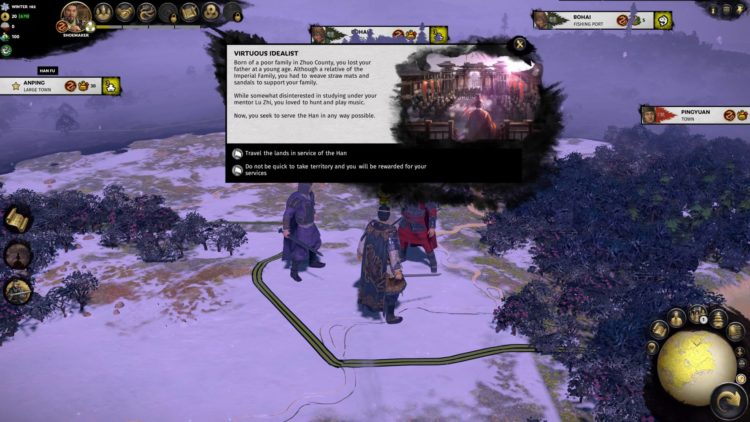 Liu Bei’s Mandate of Heaven campaign can be difficult because you have to ensure that you’re in the correct positions and stances each turn. Otherwise, the looter armies you encounter will end up running away, or they can attack you while your troops are weak (leading to restarts). You may have to manually fight each battle (especially on higher difficulties) to minimize casualties.

It’s also important to capture and employ the officers leading these looter armies. You won’t need to spend gold, and you can recruit them on your next turn. Most of their militia retinues will likely have no upkeep. 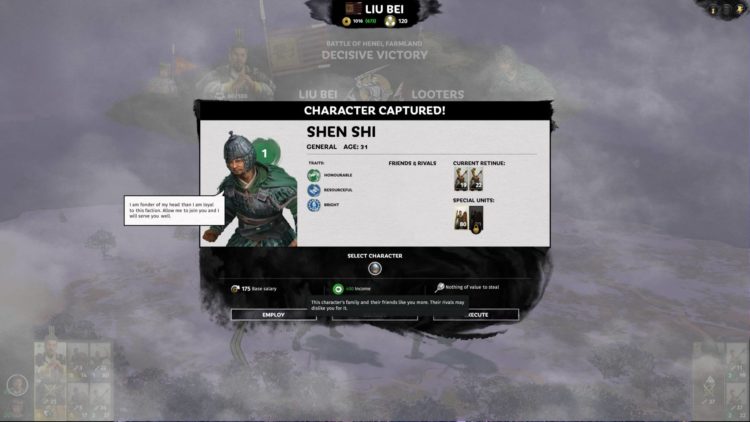 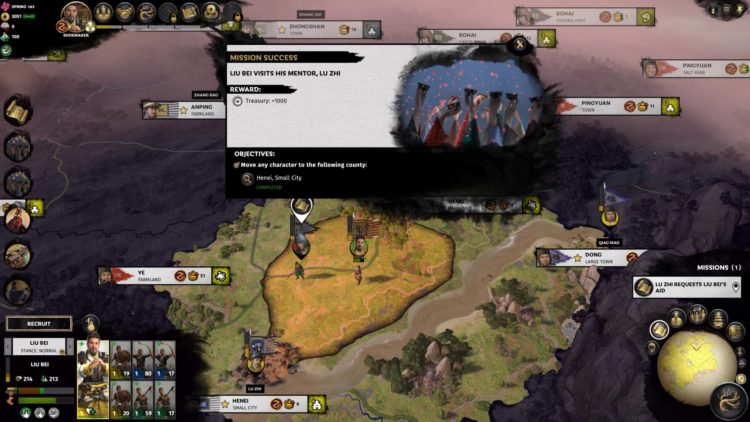 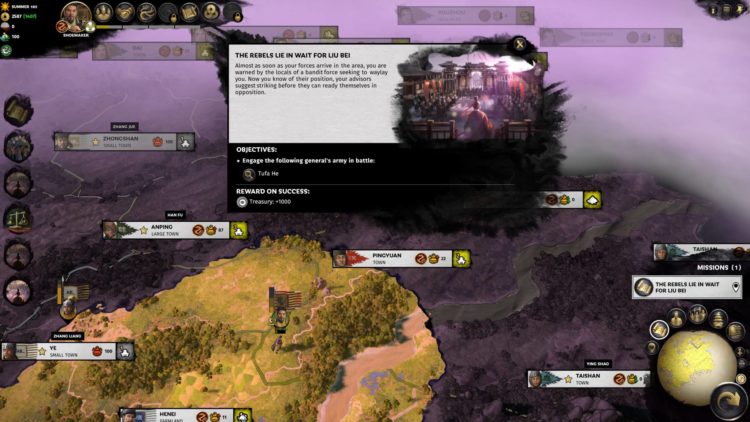 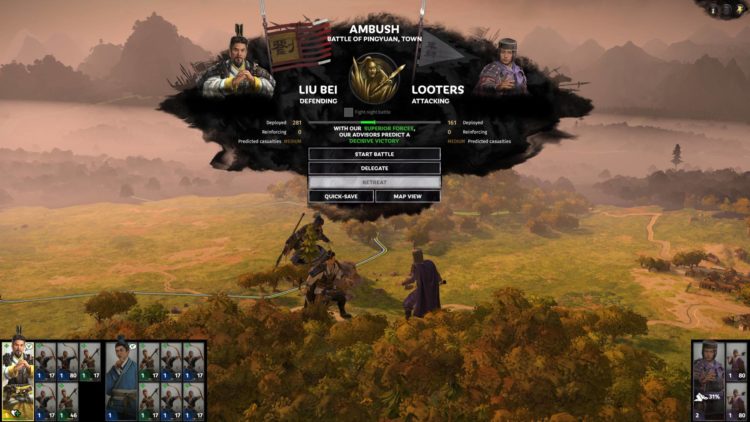 Note: There seems to be a bug with this event. Duplicates of Guan Yu and Zhang Fei can spawn once the “Oath in the Peach Garden” event fires. 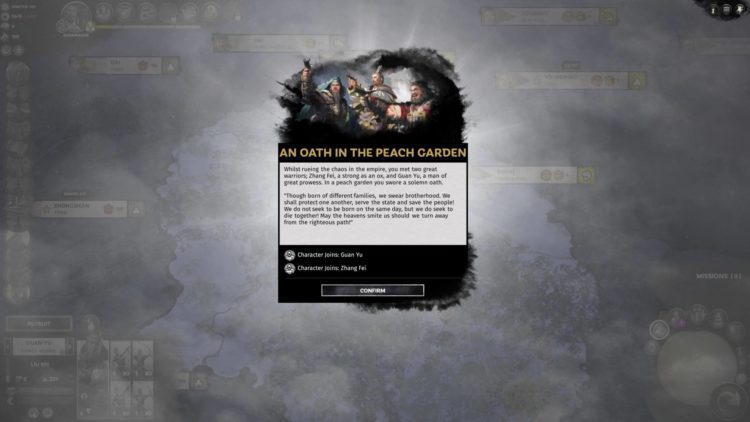 I was able to replicate this bug easily enough. The reason for this glitch is due to the “Oath in the Peach Garden” event having two different triggers: Either you defeat the final looter army in Bohai, or it’s already turn 9. If you get both requirements to happen on the same turn, you’ll get duplicates of Guan Yu and Zhang Fei. Here’s how:

Mandate of Heaven: Liu Bei and the Mandate War

While the above glitch is cool to see, I wasn’t able to try it out while completing the rest of this guide. As such, the guide won’t indicate this significant improvement.

In any case, take “Sino-Roman Embassy” on turn 7 so you can have another trade agreement ready. Moving forward, focus on reforms that increase peasantry income and those that lower character salaries.

It’s time to take the fight to the Yellow Turbans once the Mandate War event fires on your next turn. Alternatively, you could ignore the entire conflict. Take your sworn brothers, head to the sea, and capture new lands on distant shores. You could even start the historical Romance of the Three Kingdoms rivalry early on by going to the Southlands to battle with Sun Ce and Cao Cao. 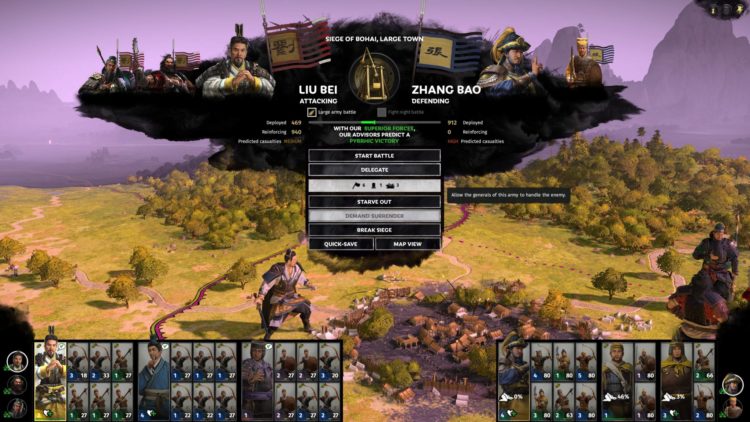 Zhang Bao was the first to go. He captured one of Han Fu’s cities, but Liu Bei, Guan Yu, and Zhang Fei immediately surrounded him. Zhang Liang is expected to march towards Bohai and you can ambush him on the way.

Note: Once you’ve captured territory, your income will be in the red since your extra upkeep discount from being regionless is gone. Militia units are still cheap, but they’re no longer free. As such, you’ll want to disband some units (or dismiss useless officers) to avoid going bankrupt. 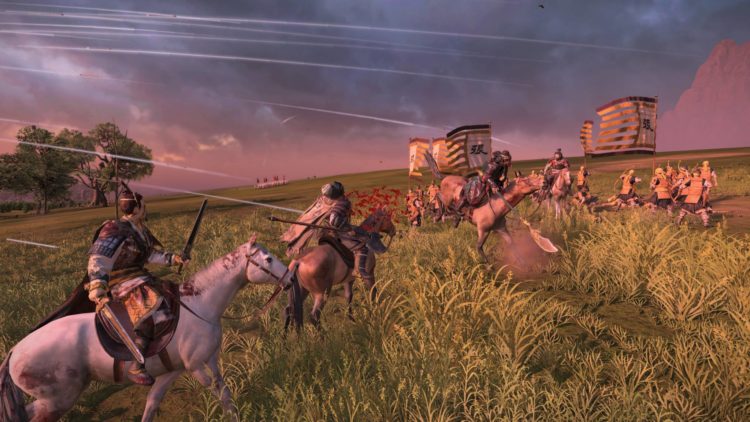 You’ll also be given a quest around this time where you need to do the following: 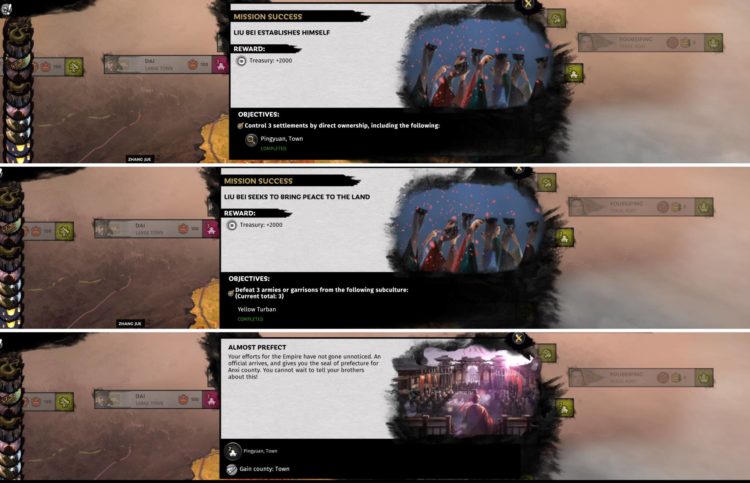 Zhang Jue usually beelines for Han Fu’s last settlement and he’s got a full stack so watch out. Just try to catch him out in the open (ideally when he’s in forced march stance or via an ambush).

Huang Shao, however, is one slippery fella. He starts in Dong commandery, sure, but he also has a habit of gunning for Liu Bei. He’ll cross the river and land near Pingyuan. Once you’re able to deal a heavy blow to Zhang Jue, make sure you’ve got one of the sworn brothers in ambush stance ready for Huang Shao’s arrival. 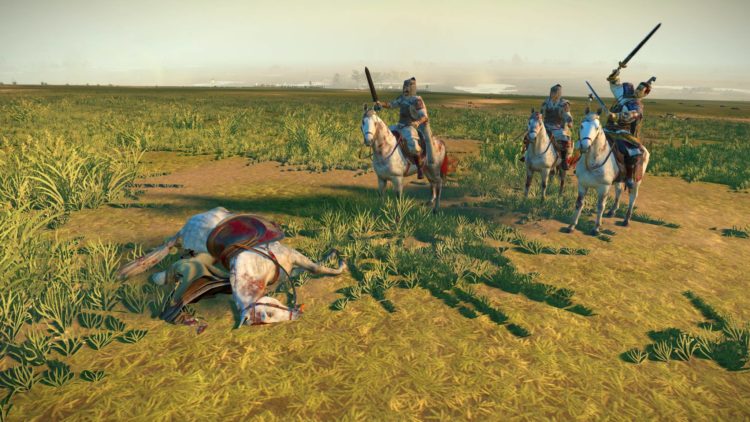 Ending the Mandate War and farming the rebels

In most Mandate of Heaven playthroughs as any Han faction, your allies are incompetent when dealing with Fervor, and it’s likely to continue spreading in the north unless you babysit their territories. Try to build some temples or military infrastructure to lower Fervor and gain boosts to public order.

Alternatively, Liu Bei can farm the mustering rebel stacks with an extra army to increase your Unity gains without any hassle. If you want, you can build the Shu-Han Tax Collector which lowers both Fervor and public order — which is an odd combo, I know — to guarantee rebel spawns that you can slap around for easy Unity points.

Around turn 25 or so, Liu Bei should’ve expanded north while swarms of Han allies whittle down the remaining Yellow Turban forces. You should also besiege settlements with smaller armies while the Han lords serve as reinforcements (unwittingly giving you free cities). Eventually, your coalition will defeat Zhang Jue and end the Mandate War for good. 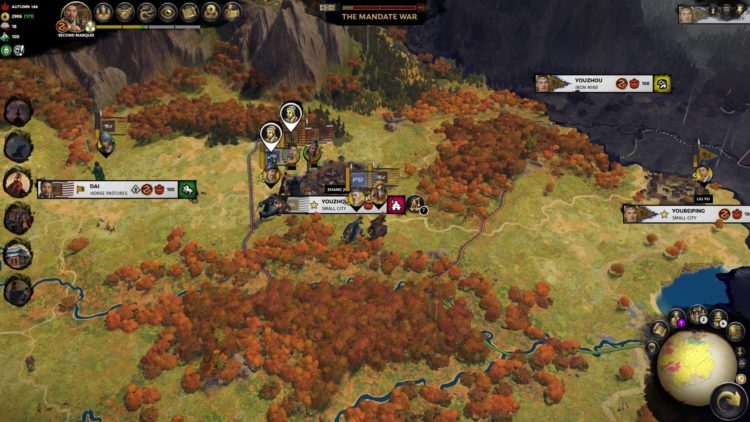 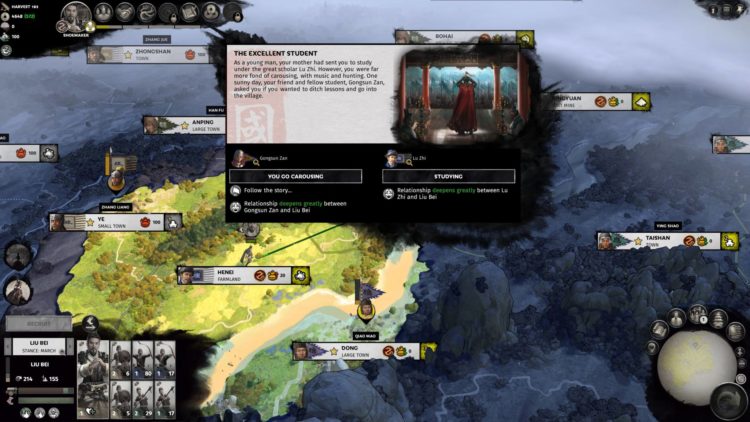 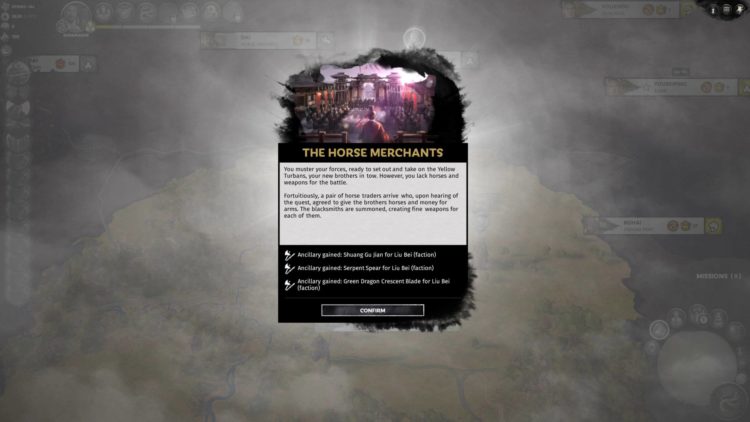 When you’re done with the Mandate War, you’ll just have to prepare for Dong Zhuo. First, he’ll annex Ding Yuan’s lands via an event on turn 31. After that, Emperor Liu Hong dies on turn 34. By turn 36, Dong Zhuo will control the capital and he’ll dissolve the empire. 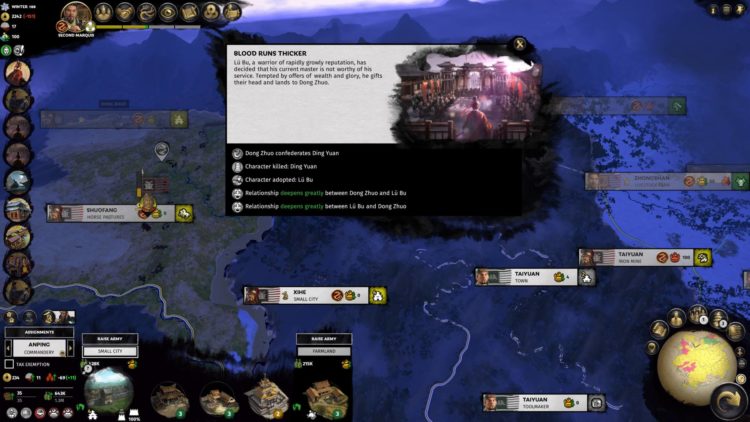 In Total War: Three Kingdoms‘ original campaign, Tao Qian’s death would lead to Liu Bei taking over his lands via a faction dilemma. Unfortunately, getting this dilemma to happen in Mandate of Heaven is almost impossible. In one playthrough, he died too early. In another, he stayed alive. But, I was in a coalition with Lu Zhi at the time and Tao Qian just wouldn’t accept. He joined an entirely different coalition instead.

Note: Speaking of faction events, you also don’t get one that lets Zhao Yun automatically join your faction. My guess is because Gongsun Zan doesn’t exist as a faction leader like in Total War: Three Kingdoms’ original campaign. The only way to obtain both of them in Mandate of Heaven is if they somehow end up in your court. 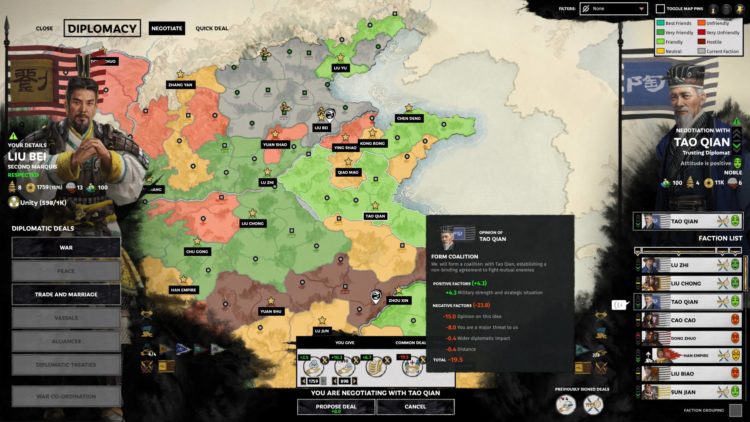 Liu Bei attained Marquis rank by turn 38 when Beigong Boyu of all people accepted a Unification proposal. Later on, Liu Chong accepted Unification as well which made me a Duke around turn 50.

I was able to vassalize Kong Rong (who was already beset on all sides). He and Yuan Shao left the Han Emperor’s faction prior to its destruction and they had to fend for themselves. In the end, a climactic battle against Dong Zhuo took place in Luoyang. No, not the city… just the trade port. 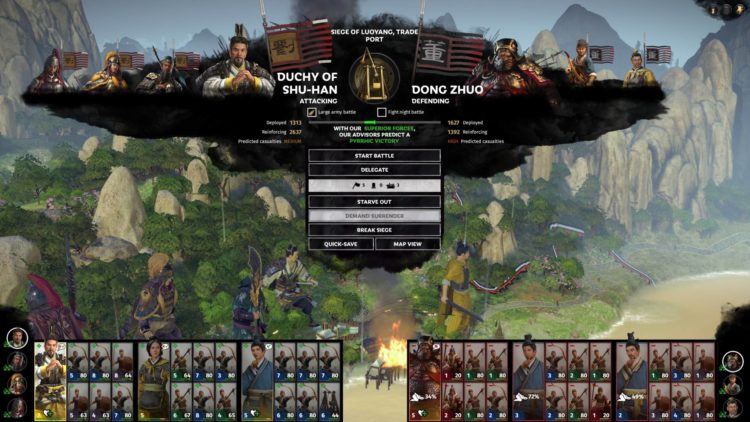 From here, you’ll simply follow the same concepts as before in Total War: Three Kingdoms. Continue building your power base, make sure your officers are happy, and play whack-a-mole with those Yellow Turbans (and other hostile armies) for the extra Unity gains.

Eventually, Liu Bei (who started from the bottom) will lead the Kingdom of Shu-Han. Also, no, Liu Bei will not restore the Han once you “rescue” the emperor.

By Logan Broadley6 mins ago
Guides