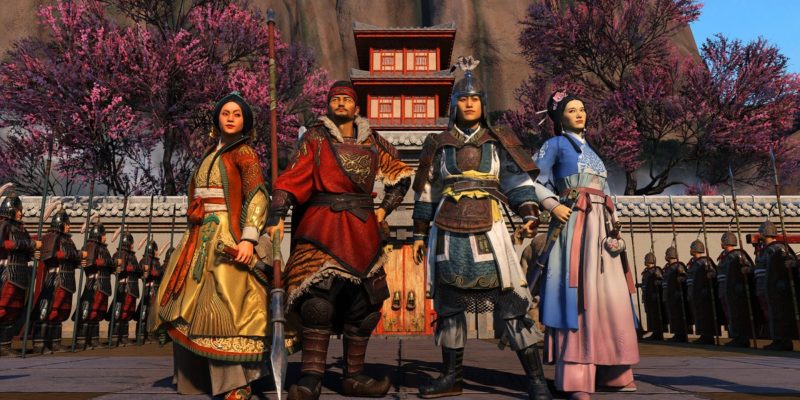 It was not that long ago that Sega and Creative Assembly announced the latest DLC for Total War: Three Kingdoms. The new content for A World Betrayed will see not just Sun Ce and Lü Bu take the spotlight alongside other factions, but also a new conflict on the horizon. Alongside this substantial update will be patch 1.5.0, which will target issues raised by the community as well as introducing new campaign mechanics, units, characters, and more.

There will also be Free-LC, with the introduction of White Tiger Yan, or Yan Baihu, as a playable character. He can be used in both 190 CE and 194 CE start dates and has his own unique weapons, the Tiger’s Claws, but also come packing some unique faction mechanics.

The Shanyue Camps is a minor settlement building, providing food, bonus research speed, and access to more tribal units. White Tiger Yan’s doctrine of the White Tiger Confederation also grants “strengthening benefits which correlate to the size of coalition it belongs to or alliance it is a member of.”

Patch 1.5.0 for Total War: Three Kingdoms will also be adding 16 new legendary characters that can appear in all relevant campaigns.

Notable characters include Cheng Pu and Zhou Tai as warriors of Wu, the Qiao sisters, and Lü Bu’s rebels Chen Gong and Gao Shun. Zhang Zhao and Zhang Hong are also in the mix.

A new character type distinguishable from New Legendary Characters has also been added, which can be spotted from their unique art. Not available in custom or multiplayer battles, they include Wang Lang, Yan Yu, Li Jue, Liu Yao, Ji Ling, Lady Bian, and Lady Mi.

The bandits will see some changes as well in patch 1.5.0 entering into Total War: Three Kingdoms – A World Betrayed. They now possess a unique tech tree and faction mechanics that make for a different play style. Tied to a network of contacts and alliances with marginalized groups and sympathizers, this is how bandits will develop:

Rather than build up cities, bandits will instead focus on raising enough armies for raids in small settlements. The whole revamp is extensive, and if you are looking for a fresh perspective, the bandits might be your way to find out.

A full breakdown of patch 1.5.0 for Total War: Three Kingdoms and A World Betrayed DLC can be found on the game’s blog. Suffice to say, the game will be seeing some significant changes, and we will have our review up soon as the DLC is set to launch on March 19.