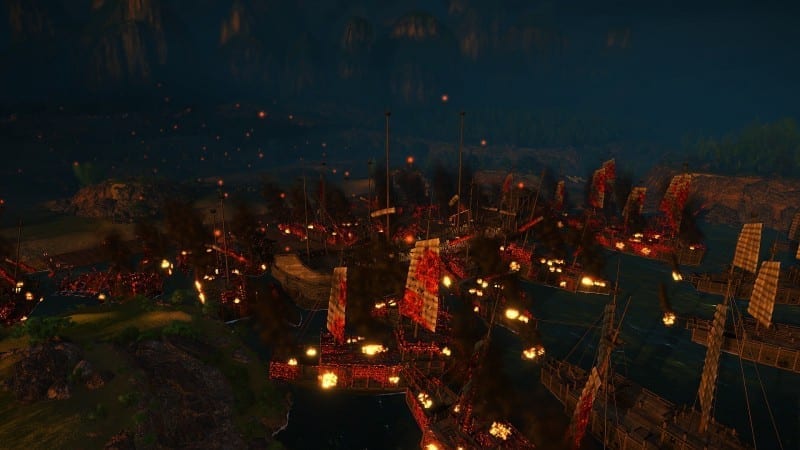 Total War games have had a brush with technical issues early on in their lifespan. One need only look at Total War: Rome 2 to see how unoptimized it was during launch, or the woes experienced by Total War: Warhammer. So, yes, it pays to be wary when a new title comes around.

Then, here comes Total War: Three Kingdoms, which throws all past problems out the window, so much so that I thoroughly enjoyed my 67 hours of playing, as you can see in our official review. I can state that this just might be one of the most polished offerings from the studio in recent years.

Before we continue with this technical review, let’s first look at the system requirements via the Steam store page. 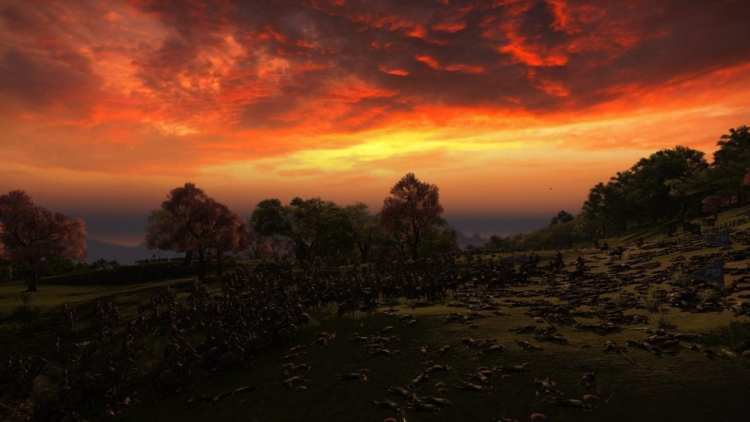 A red sun rises, blood has been spilled… oh yeah, no Blood DLC yet, nevermind.

The first thing you’ll notice is that Total War: Three Kingdoms’ system requirements are extremely forgiving, so much so that I barely encountered any issues while playing the game at 1080p resolution. I was able to run the game on Ultra preset by default with hardly any problems. (Well, almost, and I’ll explain this later.) 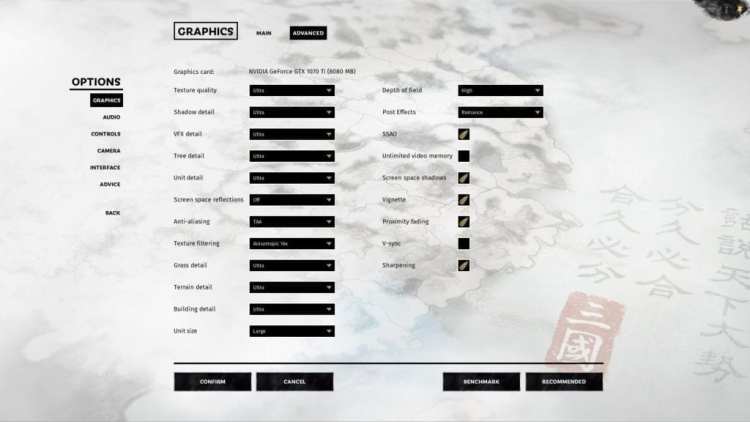 You can see the graphics settings I have for Total War: Three Kingdoms in the image above. The settings that have the biggest impact on performance are unit detail, screen space reflections, unit size, unlimited video memory, and anti-aliasing. For the last one, the game uses temporal anti-aliasing (TAA) which makes the foliage, vegetation, and backgrounds look stunning. Switching to fast-approximate anti-aliasing (FXAA) might lead to improved performance but it’s a lot uglier compared to TAA.

Total War: Three Kingdoms also has an in-game benchmark tool which you can run. One will pan over the campaign map, the other will look at a massive battle. I got an average of 63.3 FPS with my rig but don’t let that result fool you. The first few seconds of the benchmark contain wide, open-field shots that don’t necessarily have a lot of action or particle effects. You will notice some drops in bigger battles, but, thankfully, these aren’t too egregious. 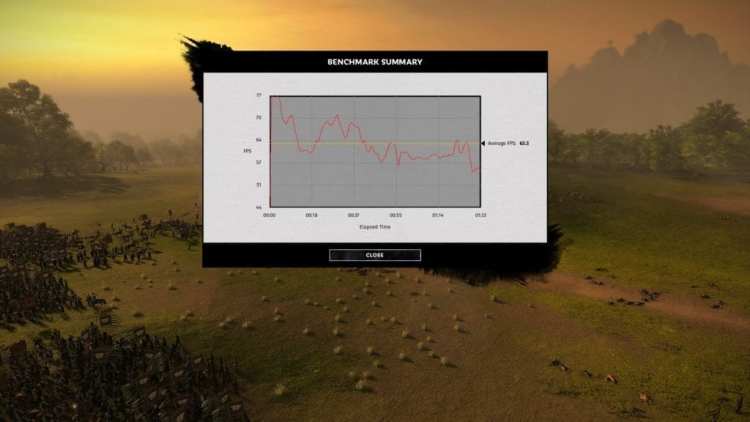 My results for the battle benchmark (Ultra preset).

Here are a couple of screenshots (Ultra preset) with MSI Afterburner, RivaTuner, and HWinfo enabled: 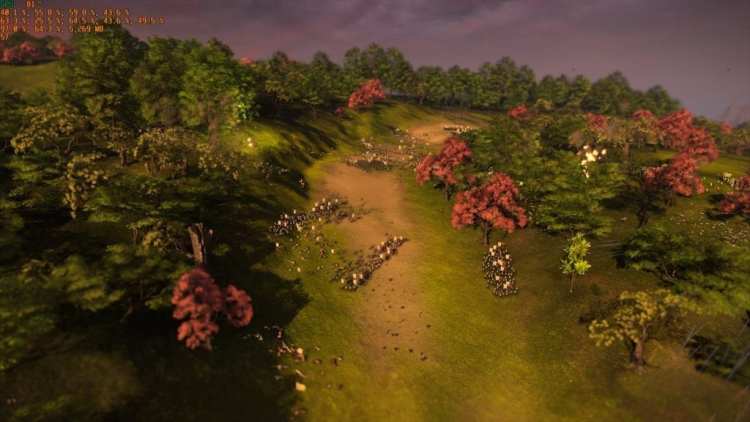 Zoomed out on a battlefield. 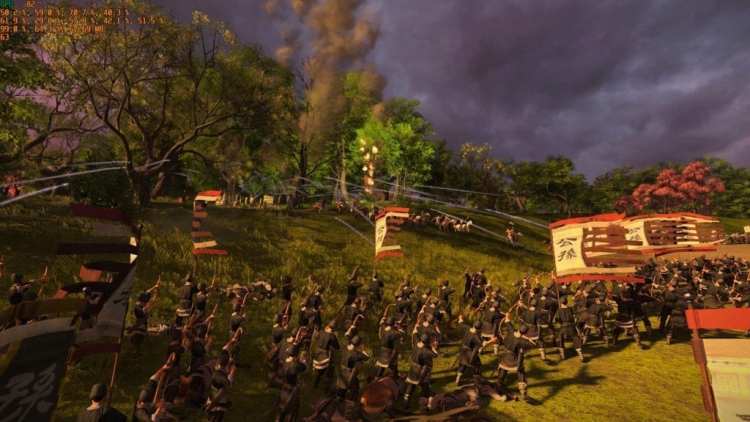 Zoomed in on some archers.

Panning, zooming, and sweeping around the battlefield will noticeably lead to framerate drops, although this would generally climb back up to 55-60 FPS once you’re “fixed” at a position. You’ll notice that my GPU was also putting in the work.

Next up, let’s take a look at preset comparisons (low, medium, and ultra). This first set shows the Shu-Han army ready to do battle: 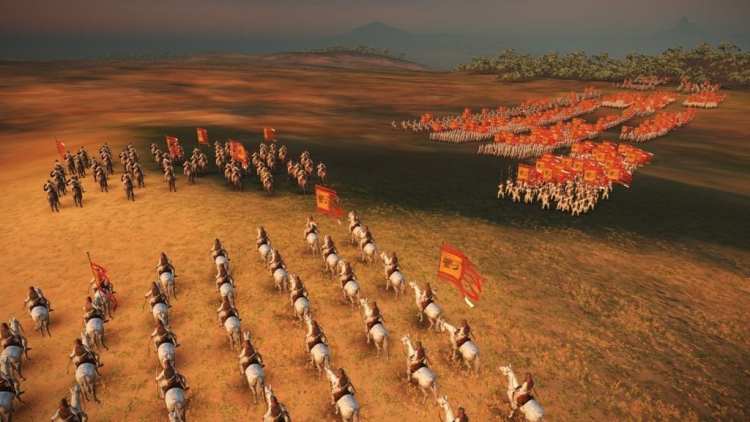 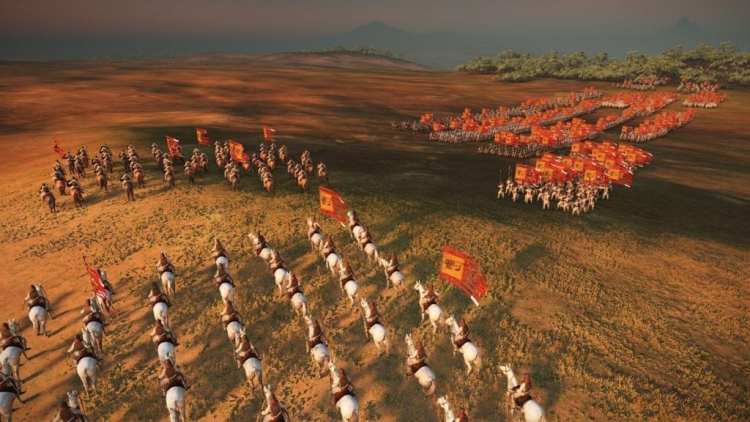 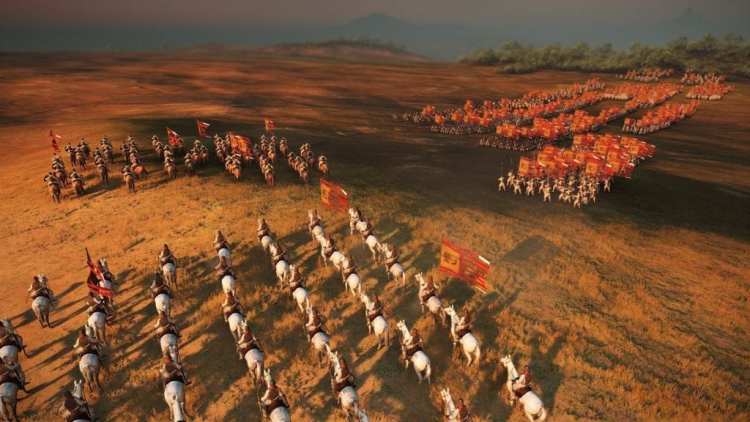 This next set has a more close-up look at the lords of the Kingdom of Shu-Han: 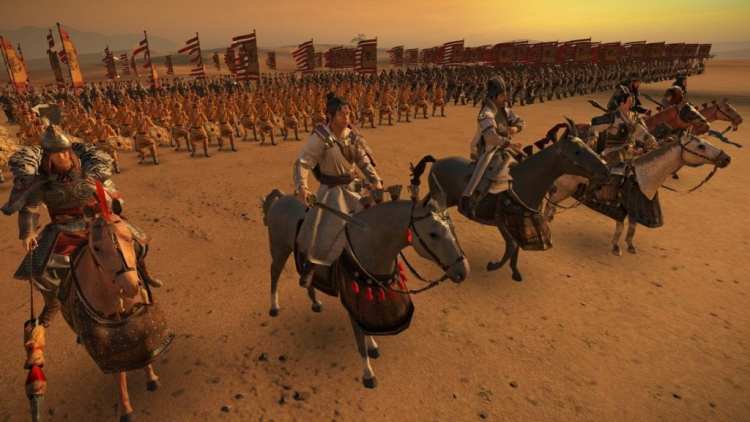 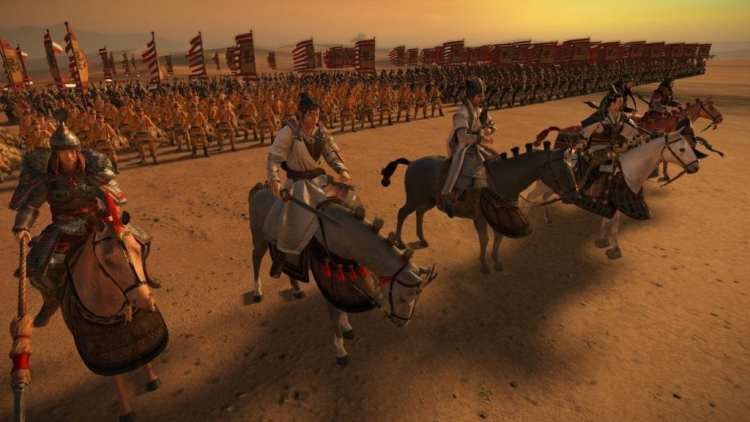 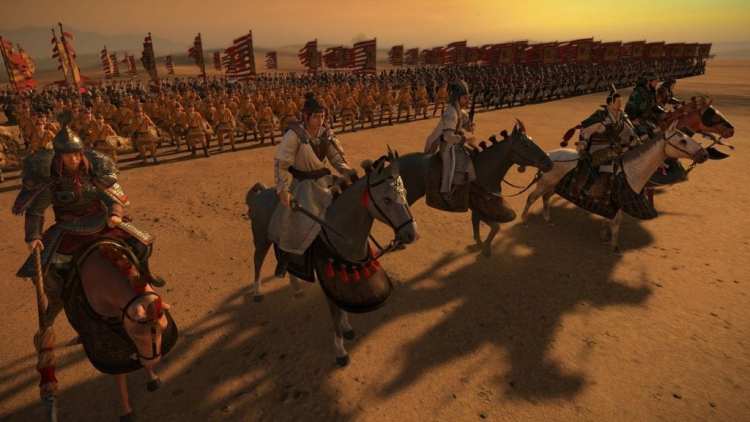 Both the low and medium presets switch to FXAA by default, so you’ll notice the glaring difference in quality, especially with regards to the foliage and environment. Mix and match the different settings, while running the benchmark tool, to find out what suits you best for your rig. 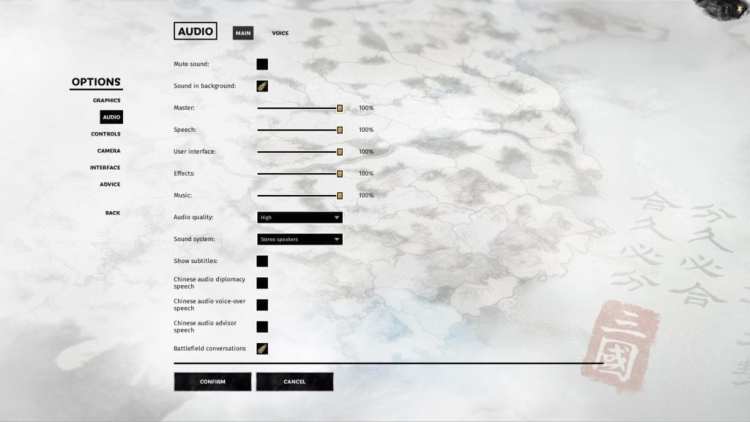 This is another feature of Total War: Three Kingdoms which truly shines. You already have your usual volume settings and mic/voice chat settings (in a second tab), however, you’ll notice the availability of Chinese language voice-overs for diplomacy and advisor help. It’s an amazing feature to include which only adds to the immersion and authenticity of the game. 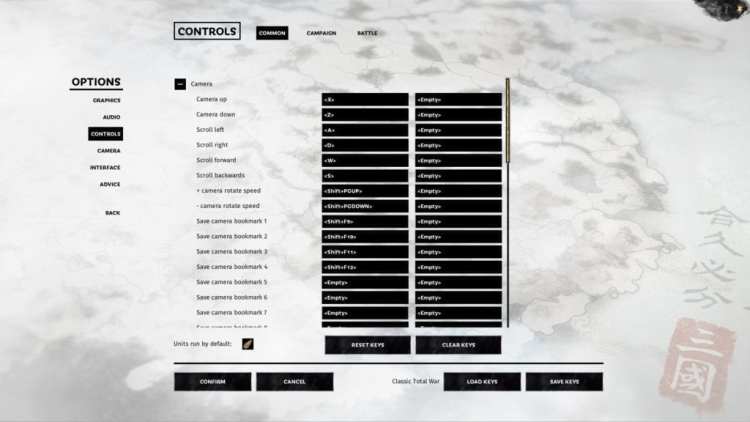 You’ll have your usual customizable keybindings here, as well as camera controls. One new addition is that basic controls are now readily seen when you pause the game (Escape key) which is very helpful for newcomers to the franchise. 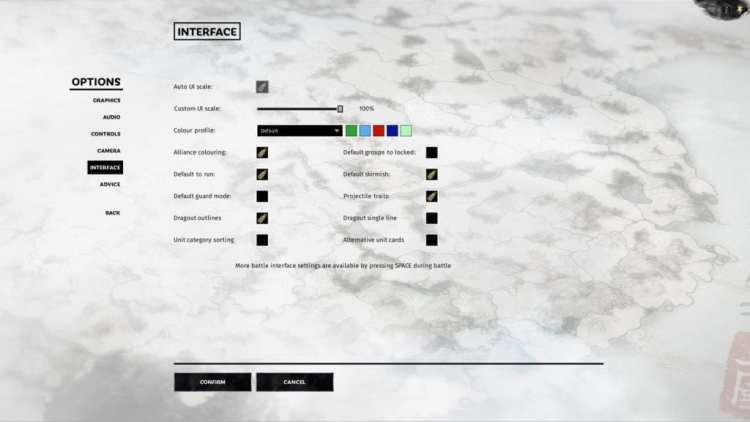 These are your UI settings for the game. They’re mostly for the default settings when your units need to run, enter skirmish or guard mode, or toggle groupings. One more thing of note is that you can also hold the spacebar during battles. This will show you more options to toggle including unit/hero portraits, movement paths, auras, and even the ability to hide foliage in maps. 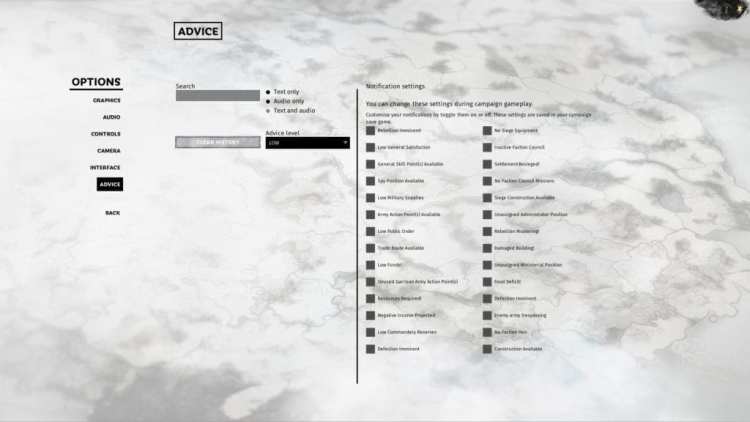 This final panel lets you toggle advisor help and notifications during the campaign. If ever you’re already a veteran of the Total War series, then you might want to ignore some of the tooltips. Still, the information is very helpful since there are several new mechanics in Total War: Three Kingdoms. 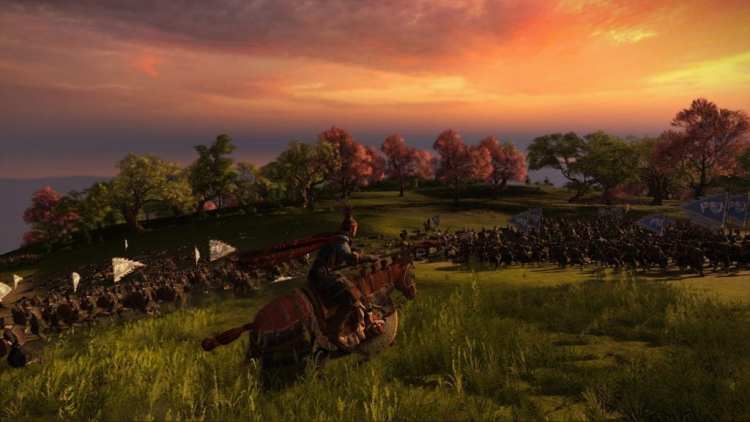 Lu Bu is out for a stroll.

As mentioned at the beginning of this technical review, I hardly experienced any issues while playing Total War: Three Kingdoms. That’s almost unheard of given the myriad problems that plagued previous games in the franchise. The biggest problem I encountered from a technical standpoint was during one battle when my game periodically froze whenever I had to group certain units (I had to restart my PC). Then, I realized that I forgot to update my Nvidia driver to the latest version which has additional support for this game. I haven’t encountered that problem since.

Overall, the system requirements for Total War: Three Kingdoms are very forgiving, especially for such a gorgeous game. Naturally, while it may be a tad demanding for higher settings, performance drops and technical woes are barely noticeable. It also bears mentioning that loading times are quite fast (around five seconds) when installed on an SSD. This might be, without a doubt, the most polished and technically sound Total War release in the past few years.

You can read more about Total War: Three Kingdoms in our official game review.