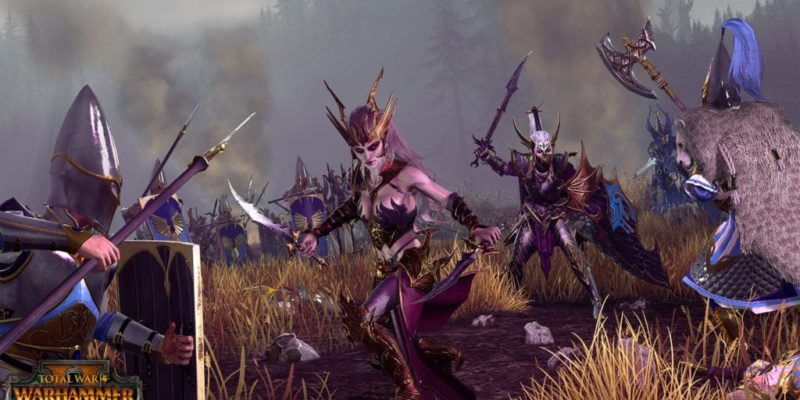 Earlier today Creative Assembly went through the Dark Elf unit roster for Total War: Warhammer 2 in a Facebook livestream. That’s still available if you want to watch the whole thing, but as usual a text version has also been released.

The latter is missing a couple of specifics mentioned in the livestream. Namely, that the Dark Elf faction will have “murderous prowess”; an ability that can boost the slaughtering skills of your units for around one minute. It’s triggered by enough people dying, on either side of the battlefield. So if you fancy sacrificing a cheap unit in order to up the death count, that might be tactically advantageous (and very Dark Elfy).

There was also a side note about Lizardmen. Turns out in Total War: Warhammer 2 the Saurus units will have ‘Predatory Senses’ that help them sniff out hidden units.

But back to the Dark Elves. Here’s the full unit roster. Like the previous rosters it’s missing details about which Lore of Magic the Dark Elves will use (it’ll be Dark).

Malekith is the son of Morathi and Aenarion. He grew to be a mighty warrior, a great sorcerer and a brilliant general, but was shunned by his folk when Aenarion was slain. Wehn Bel-Shanaar was chosen to rule in his stead and Malekith began a long campaign that has lasted for five thousand years.

Now reigning over his dispossessed people as the Witch King of Naggaroth, Malekith is a fearsome warrior and mighty sorcerer. With both spell and blade he destroys all that oppose him. His burnt and scarred body is bound within the magical plates of the Armour of Midnight, and few face the wrath of the Witch King and survive.

After the Witch King himself, Morathi is the single most powerful Dark Elf in all of Naggaroth. Born to scheming and politics, and a talented sorceress, Morathi has spent five thousand years teaching her son all she knows of statecraft and magic, and works to maintain his grip on the throne of Naggaroth. Morathi is totally dedicated to her son, as he is to her. Between them they rule Naggaroth with an iron grip and bloodied sword.

Morathi has always had the taint of Chaos about her – She met with Malekith’s father, Aenarion, when the Elven lord rescued her from a Chaos attack. Many believe that it was during her time as a captive that the insidious claws of the Dark Gods first crept in her soul. It was Morathi who founded the Cult of Pleasure on Ulthuan, which eventually led to bloody civil war and the cataclysm of the Sundering. Morathi was the first to perfect the Dark Art, opening up gateways to the realms of Chaos to steal vast and unimaginable powers. Combined with her stunning beauty and keen intellect, it is Morathi’s magical abilities that allow her to hold sway over her enemies.

Cold One Chariot (guys on the back have repeater crossbows)