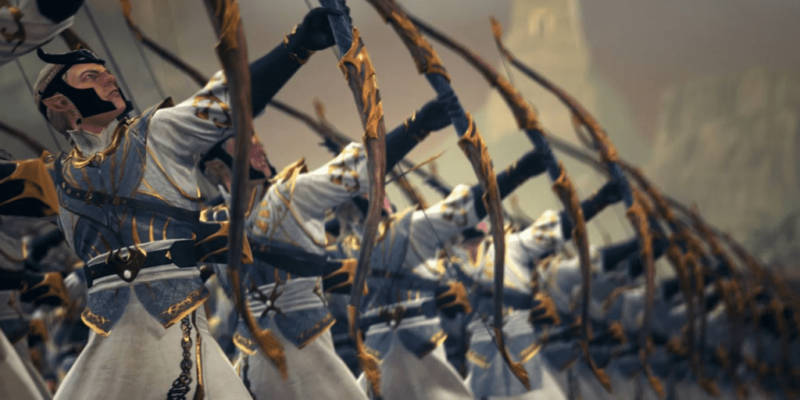 Earlier today Creative Assembly ran a livestream which revealed the High Elf army roster for Total War: Warhammer 2. If you were around for the Lizardmen reveal, it followed very similar lines. The Facebook video is still up if you want to watch all 50 minutes in full.

The studio have also put up a text version of the roster, which I’ve replicated below and reformatted a little. I’ve also added a few details from the livestream to relevant units.

It sounds like High Elf melee infantry are getting some rejigged abilities in Warhammer 2. There’s no ‘Always Strikes First’; instead, ‘Martial Prowess’ will buff the unit at full strength and 50% strength. However, High Elf units also have ‘Perfectionist’, an ability that will see melee power start to tank as you lose people from the squad. Basically, once you dip under 50% unit strength it’s really bad news.

Here are summaries for twin bro Legendary Lords Tyrion and Teclis, followed by the roster. As with the Lizardmen, there wasn’t much specific talk of magic in this stream. Again, it was confirmed that lore of magic details will be coming later for Warhammer 2.

Prince Tyrion is the High Elves’ greatest living warrior. So valiant and skilled is he that the bards of Ulthuan sing that he is nothing less than Aenarion reborn – a tale that is given credence far beyond Ulthuan’s shores. Since Tyrion’s meteoric rise to fame, many have whispered of his destiny to lead the High Elves towards a glorious future and perhaps one day to take the Phoenix Crown. If Tyrion hears such gossip, he pays it no heed, for he is unswervingly loyal to Finubar. Thus does Tyrion concern himself only with the twin duties of protecting Ulthuan and its Everqueen. However, the latter is seen less as a duty than it is a calling of the heart – it is common knowledge that Tyrion is Alarielle’s consort, and has been for many years.

Though Tyrion is a great warrior, he is no politician, and he is much given to speaking his mind or openly seeking truth where others would prefer only silence. But for his lineage and battle record, he would long ago have been ostracised by those nobles who hold themselves to be more intelligent and subtler than he is. As it is, none wish to directly challenge he who banised the Daemon N’kari at the Phoenix shrine and slew Urian Poisonblade upon the Finuval Plain.

Teclis is Tyrion’s twin brother, but two more different siblings would be hard to find. Where the curse of Aenarion has yet to leave an obvious mark upon Tyrion, it has made his brother frail and caustic. Indeed, so feeble is Teclis that his body can only be sustained by the consumption of magical potions. Yet no-one, least of all Tyrion, sees Teclis as the weaker twin – his destiny merely lies along another path. Teclis has been blessed with a talent for magic that makes him preeminent, not only amongst the mages of Ulthuan, but in the whole world. Though it is little acknowledgement in Naggaroth, the Witch King accedes that Teclis is his superior and, since the Battle of Finuval Plain, has taken care not to come into direct conflict with his younger cousin. It is even claimed that Teclis’ power approaches that of the great Necromancer Nagash, so it is fortunate that he has devoted his life to thwarting the powers of Chaos and death.

The twins also differ greatly in their strategic outlook. Where Tyrion sees the protection of Ulthuan as his chief duty, Teclis seeks to safeguard the whole world. Such is the ideology that led him to aid Magnus the Pious during the Great War Against Chaos, and thereafter found the Colleges of Magic in the Empire. Since then, Teclis has walked abroad in many other lands, sharing his wisdom with those who have need of it, and wielding his magics to keep the dark forces of Chaos at bay. Thus will Teclis’ legend endure long after heroes of the sword have been forgotten, for his actions shaped not a battle, nor even a campaign, but the future of the world itself.

Missile Cavalry
Ellyrian Reaver Archers – Like the melee version, but with bows (also have Vanguard)