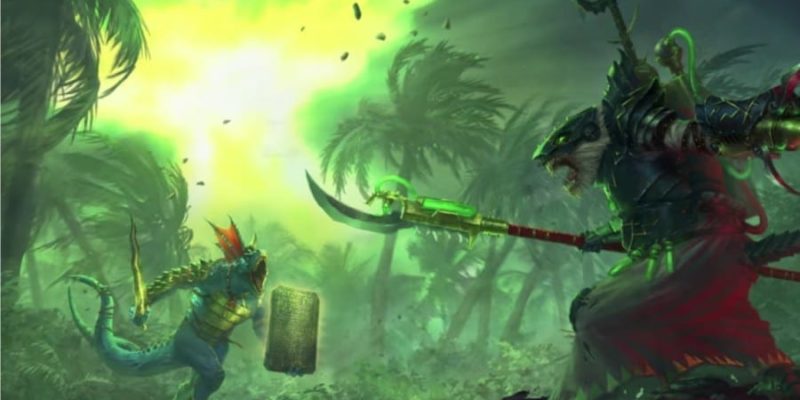 It’s been a while since Total War: Warhammer 2 made the rounds. By “a while” we mean: “In the name of Sigmar, bless this ravaged game which needs more Legendary Lords!”

That brings us to today’s official announcement from Creative Assembly. Two new Legendary Lords enter the fray in Total War: Warhammer 2 — Ikit Claw and Tehenhauin. They’re part of the DLC/Lords Pack called “The Prophet and the Warlock.” Check out the trailer below:

Now that was fun. I’m getting Vietnam flashbacks right now, or rather, flashbacks to movies set during the Vietnam War, and maybe even Predator. It’s actually quite fitting given that the particular battle takes place deep in the jungles and untamed wilds of Lustria.

The Lizardmen forces are led by Tehenhauin, the Prophet of Sotek (the Serpent God). A funny aside is that Tehenhauin is a Skink, one of the various species among the Lizardmen race. They’re diminutive and agile and are part of the regular workforce. For one of their own to rise to new heights is a blessing.

Speaking of blessings, given that Tehenhauin leads the Cult of Sotek, he can invoke the Serpent God’s will via post-battle sacrifices. At the highest level of this invocation, he can even call upon a manifestation of Sotek himself. Oh, and all Lizardmen lords will also be able to go on a quest to seek out Lord Kroak, mightiest of their kin. His spirit remains tethered to the world, and he’ll be able to join your forces as an immortal hero! 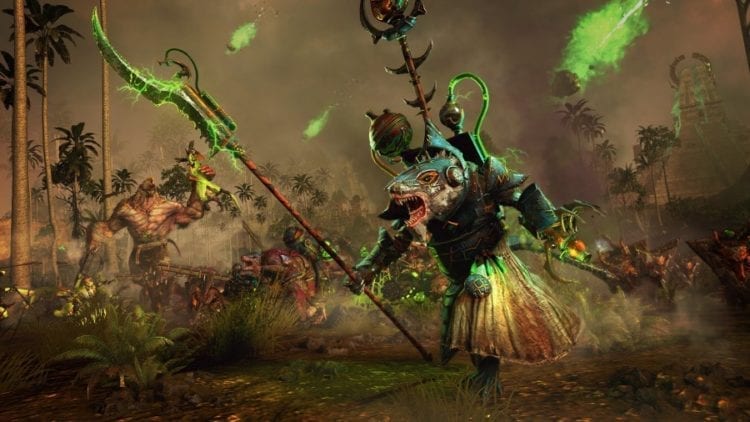 As for Ikit Claw, he is the Warlock-Engineer of Clan Skryre. Skavendom is dominated by a handful of clans and Skryre is one of those owing to their ingenuity and design. If Clan Moulder made abominations and experiments, and Clan Pestilens made diseases and experiments, then Clan Skryre makes new weaponry and, uh, experiments. Point being that Skaven are mad scientists, and Ikit-Claw is one of the most brilliant minds in the Under-Empire.

Ikit-Claw’s campaign involves making use out of the Forbidden Workshop of Clan Skryre. By doing so, his forces unlock new Regiments of Renown and devastating units such as Warpstorm Doomrockets and the Doomsphere — a bomb made of pure warpstone.

The Prophet and the Warlock DLC for Total War: Warhammer II will also add refreshing campaign mechanics, and new generic lords and units. We’ll see Ripperdactyls and Salamanders for the Lizardmen, and Ratling Gunners and Warplock Jezzails for the Skaven. By the way, these last two have been long-awaited by Warhammer Fantasy fans.

You can pre-order the DLC now via Total War: Warhammer II’s Steam store page. You don’t have too long to wait for Sotek or the Great Horned Rat to bless your ravaged body since it’ll be available on April 17.

Lastly, it’s not just the Lizardmen and Skaven getting a boost. That’s because Bretonnian leaders will have an all-new Vow system and a few tweaks. That’s part of a free update coinciding with the DLC’s release. If you’d like to know more, you can visit the game’s FAQ page as well.

By Jake Su32 mins ago
Industry