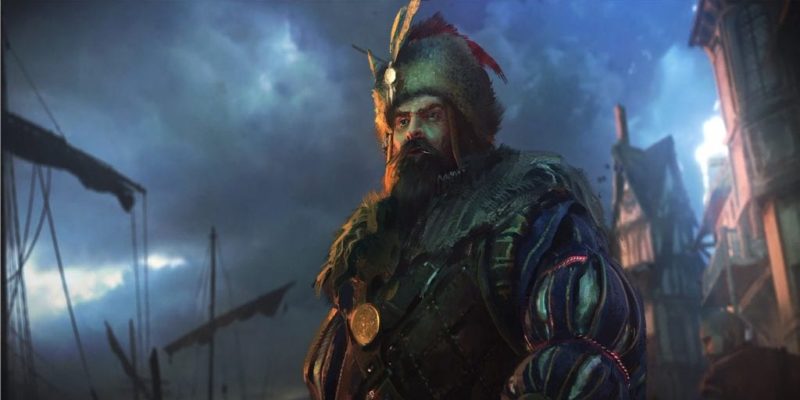 Total War: Warhammer 2 will have a brand new DLC tomorrow. Known as The Hunter & The Beast, the DLC/Lord’s Pack will introduce two new legendary lords — Markus Wulfhart and Nakai the Wanderer. The former leads the Empire’s expeditionary forces on Lustria and he’s the subject of this mini-guide. Will Markus Wulfhart be able to find the Legendary Hunters? Or will he be forever lost in the harsh jungles of this strange continent?

Note: You can also check out our Total War: Warhammer 2 – The Hunter & The Beast guides and features hub for more info. 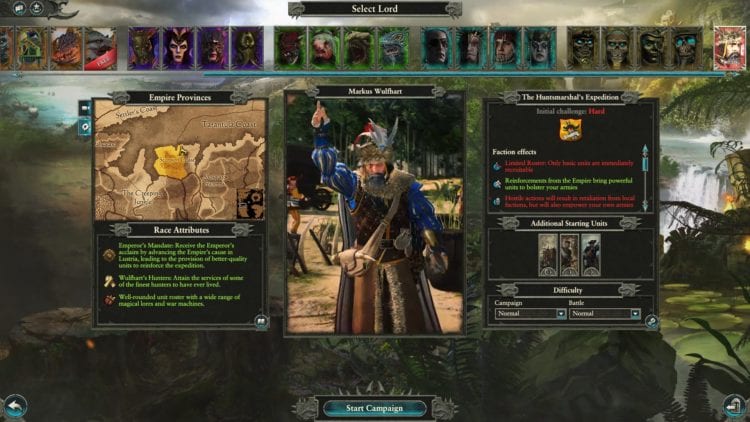 A lonely lord of the Empire.

In Total War: Warhammer 2, Markus Wulfhart’s faction is called The Huntsmarshal’s Expedition. As the leader of the Empire’s scouts, he’s responsible for voyaging into the unknown in search of new lands and treasures for Karl Franz’s domains. Wulfhart is playable for both the Vortex Campaign and Mortal Empires if you own  The Hunter & The Beast DLC.

Note 1: Markus Wulfhart doesn’t partake in the actual race for the Vortex mechanic. He has other goals in mind during the campaign, though you’re free to impede the progress of other factions.

Note 2: From time to time, you’ll be told that a lot of hunters have left the mainland to join your expeditionary force. You’ll be asked which Empire province to support. Although it won’t make a difference when it comes to the actual Elector Counts system, you can repeat the same province choice to earn particular bonuses (such as gold or units). There will be a consequence, however, such as less gold earned for a few turns or an instant increase in hostility levels. 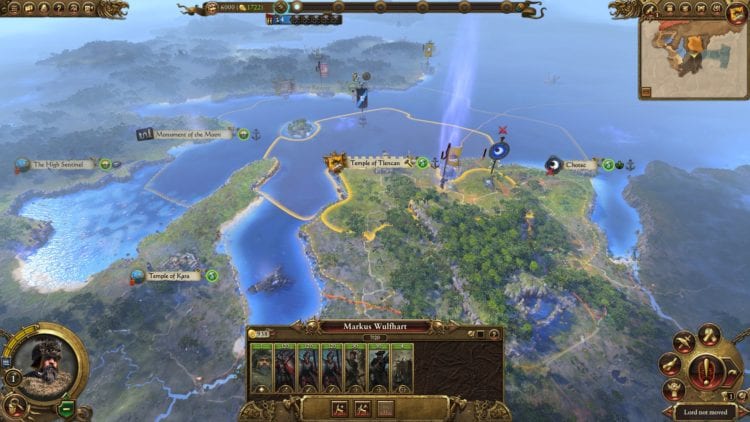 You’ll start out in the Scorpion Coast province with the Vampire Coast and hostile Lizardmen nearby. Don’t worry because you’ve got the New World Colonies who seem fairly nice. Too bad they just won’t confederate with you.

Wulfhart’s campaign progression is vastly different compared to your old romp as the Empire in the first Total War: Warhammer game. As an expeditionary force, Wulfhart’s faction cannot confederate with other Empire lords.

Your starting position in the Vortex Campaign is at the Scorpion Coast. Your simple hovel only has eight building slots, so I’d suggest you start making a push to The Awakening or Itza, both of which have ten slots.

Wulfhart only has access to just the most basic units such as archers, spearmen, and swordsmen at the beginning. He does start with a unit of huntsmen and war wagons.

Wulfhart has a couple of methods to gain better units throughout Total War: Warhammer 2‘s campaigns. The first is through the new Imperial Supply system that’s only available for the Empire’s Huntsmarshal. The second is, of course, via upgrading your settlement buildings. However, certain buildings will be locked depending on your Emperor’s Mandate level or “acclaim.” 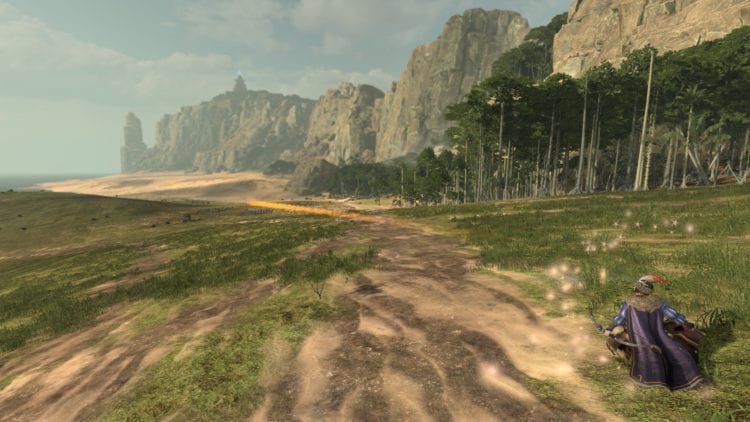 Markus Wulfhart also has a unique skill called Focused Shot which is good for larger monsters or armored combatants. This fires a long-ranged arrow at the target to deal tremendous damage. The problem with this skill is that you need a clear line-of-sight at the target. Sniping gigantic Dread Saurians or other dinosaurs would be no problem. But, trying to shoot a single lord that’s in the middle of densely packed units can be problematic.

Note: Wulfhart can also obtain the Amber Bow unique weapon from a questline. You can check our Amber Bow mini-guide on how to complete the quest steps.

Upon acquiring more skill points, Wulfhart can replace this skill with Executioner which is a more powerful version. The Hunter & The Beast‘s new legendary lord for the Empire also has a few nifty passive skills: 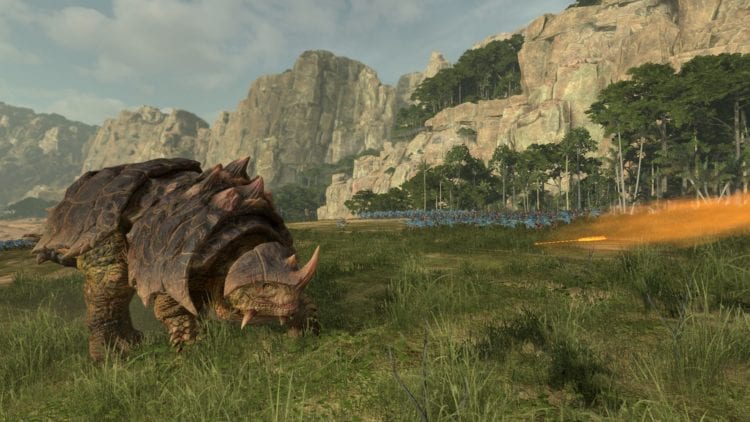 Wulfhart can recruit various lords such as the General of the Empire or Arch Lector at the start of the campaign. He can also recruit the Huntsman General lord. These leaders are more suited for ranged combat (with a number of skills that boost missile damage, extra ammunition, or ones that provide snares and crowd control).

Huntsman Generals can throw an oil flask at enemy units to weaken them against fire damage before lobbing an explosive shot in an area. 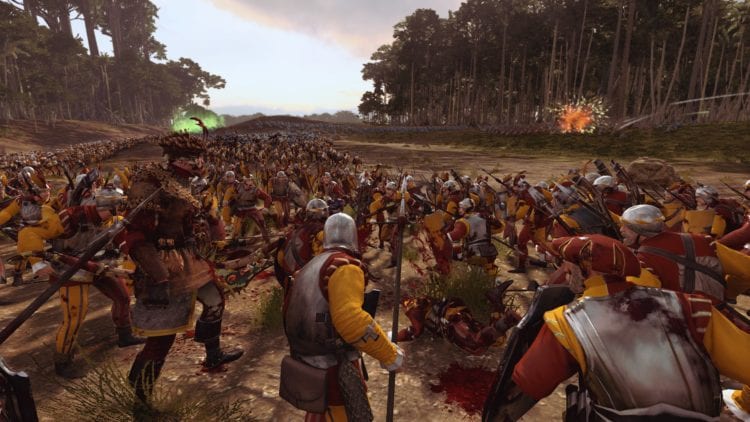 Lather them with baby oil.

Wulfhart’s campaign is a tight balancing act due to all the mechanics that you need to consider. These are on top of the usual factors you’d need to take into account such as your resources, unit upkeep, missions, and so on.

The bar at the top of the screen represents your progress throughout Total War: Warhammer 2‘s campaign. The value is called “acclaim” and it’s earned by capturing settlements, buildings ports, and finding the “unique hunters” in the game (more on this later). Acclaim decreases when you lose a settlement.

Each threshold you reach in the Emperor’s Mandate will provide a number of benefits along with some problems. At higher ranks, your diplomatic relations with all Lizardmen factions will be completely ruined. On the flip side, you do gain better recruits via the Imperial Supplies mechanic. Likewise, you’ll be able to construct more advanced buildings that weren’t available before to your faction. 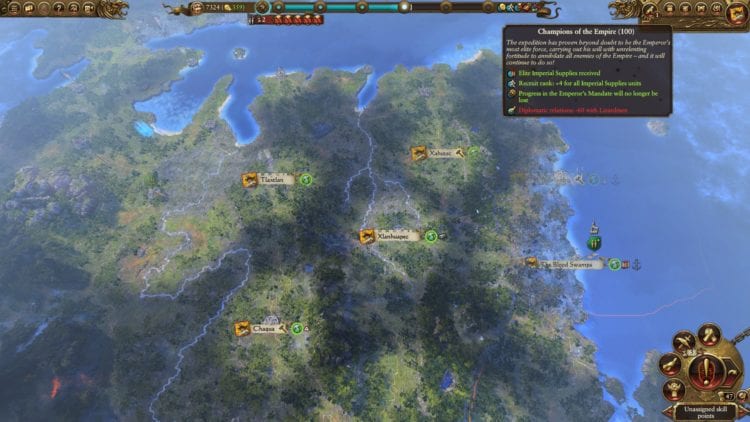 Acclaimed throughout the land.

There’s a tooltip that’s just below the Emperor’s Mandate progress bar and this represents your Imperial Supplies. These are reinforcements from the Empire’s heartlands that will be part of your expedition force. Just like Regiments of Renown, they join your army instantly once recruited (no need to wait for extra turns). The differences would be: 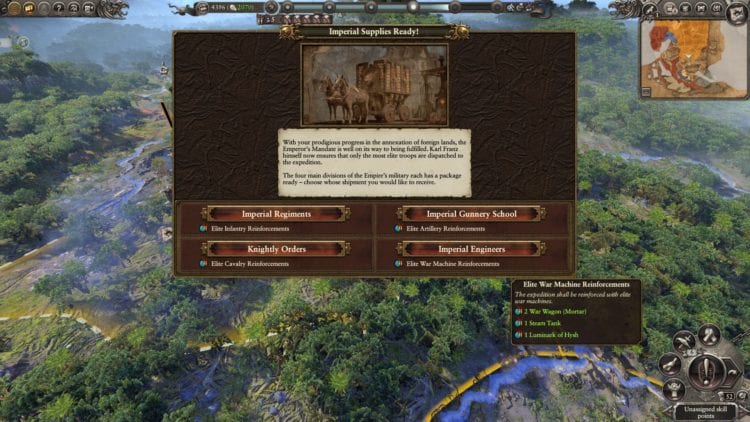 Choose the “unit group type” for your Imperial Supplies reinforcements.

There are three levels for Imperial Supplies units (Standard, Advanced, and Elite) that are dependent on the Emperor’s Mandate threshold that you’ve reached. You’re also given a choice as to which types of units become obtainable based on their group classification.

Note: In relation to the Emperor’s Mandate mechanic, you can plan ahead with the buildings you want to construct and the units you want to recruit. Since Imperial Supplies reinforcements are free to recruit, you won’t really need to create certain types of buildings in your settlements or queue up those types of troops. 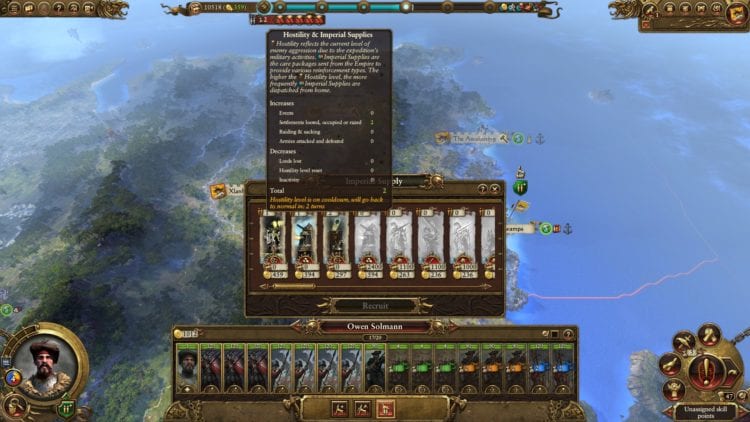 Reinforcements are here… well, as soon as you click the button, that is.

Hostility can increase via random events, conquering territory, raiding, and defeating armies. It decreases when you lose settlements, when a general is killed, when your force is inactive, or after a nominal reset (five turns) once you’ve reached the maximum level — “condemned.”

Hostility — and, by extension, expanding too fast — has adverse effects that will be very detrimental to your Total War: Warhammer 2 campaign as Markus Wulfhart: 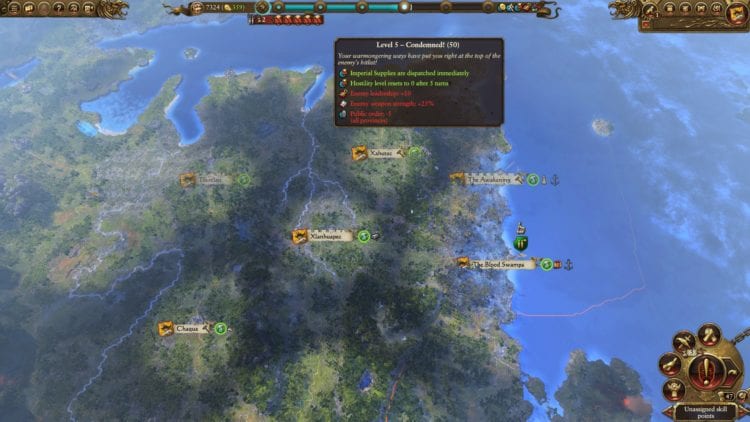 Expand too quickly and you’ll get mauled by enemies.

Again, Markus Wulfhart’s Total War: Warhammer 2 playthrough would be a uniquely engaging balancing act. You can recruit advanced units every few turns or so, but that comes at the cost of stronger enemy armies. At the same time, expanding too fast can lead to numerous problems against the rampaging Lizardmen, but being too slow would leave you with units that can barely cut it.

Note: If you truly want to make the most out of the hostility system without getting whomped hard every few turns, try to reach the max hostility threshold — aka. “Condemned” status — but have your armies ready to move out. Once you reach “Condemned,” start grabbing multiple settlements left and right. Since you’re already at the max hostility level, you won’t gain more hostility for any additional territory that you’ve obtained for the next five turns. After five turns, hostility will reset and you can take a breather. 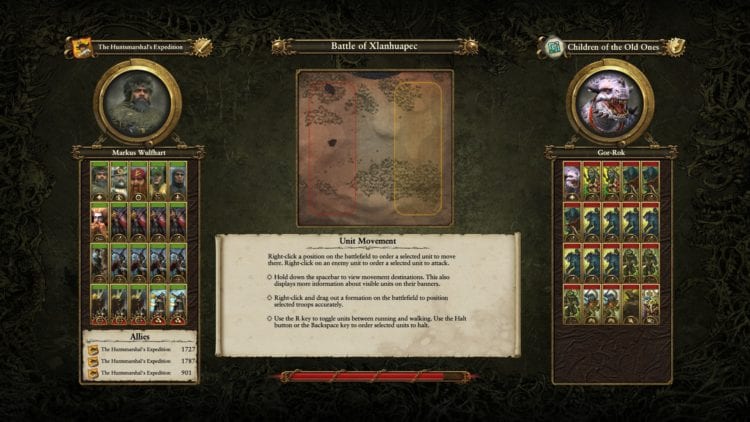 A wild Gor-Rok appears. His army leads the Children of the Old Ones faction (automatically at war with you once it spawns). This is even though he also leads Itza and this faction may not be at war with you at that point.

The Legendary Hunters – The Ubersreik Five… or Four

The Hunter & The Beast DLC also adds a treat for fans of not just the Total War: Warhammer games, but those who’ve become familiar with Warhammer: Vermintide. That’s because Markus Wulfhart’s campaign involves finding the four Legendary Hunters that have been stranded on Lustria. These four will remind you of the Ubersreik heroes from Vermintide: 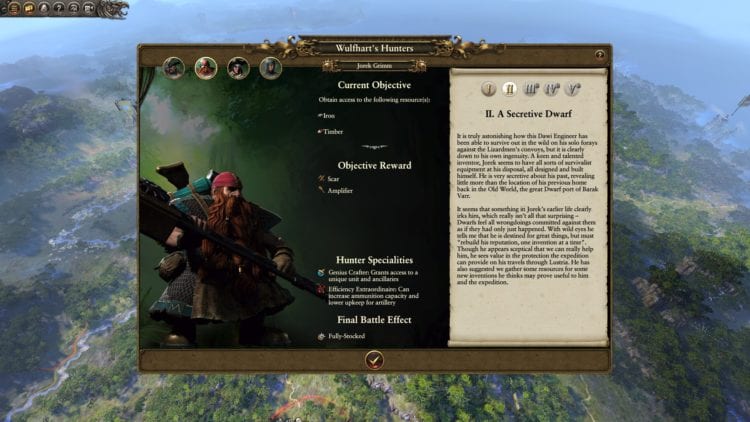 Have I told you about Cousin Okri?

The only one that’s missing is a unique Bright Wizard hero. Good luck finding a female spellcaster to be the Sienna of the team.

The four Legendary Hunters are found as you explore through Lustria’s jungles, and they even have their own mini-quests. For instance, Kalara automatically joins your faction once you’ve reached the “Very Hostile” threshold. Her mini-quests involve searching a ruin, defeating Lizardmen armies, and more. Completing these mini-quests will provide her with bonus traits and weapons.

Note: We also have a Total War: Warhammer 2 – The Hunter & The Beast Legendary Hunters guide that provides a more in-depth look into finding all four of these unique characters. 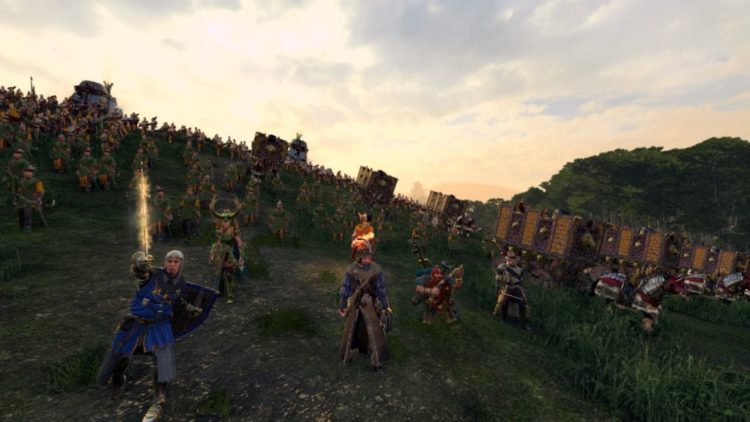 We’re the bloody Ubersreik Five… or four… or six? It doesn’t matter!

The Hunter & The Beast – The Lizardmen Threat

Although you’re free to check out Naggaroth, Ulthuan, or the Southlands just for kicks, most of Wulfhart’s adventures will be taking place on Lustria. As such, your main enemies are the Lizardmen. Whether they’re the regular factions on the campaign map, or newly-spawned “doom stacks” due to having high hostility, you’ll need to take care of the dinosaur threat.

The Empire’s early-game troops are extremely weak and ineffective against most Lizardmen units. Most lords would need greatswords, halberdiers, and demigryphs to take care of Saurus or larger monster units. Thankfully, Wulfhart does have huntsmen (anti-large) and war wagons (anti-armor) at the start.

However, you do not want to auto-resolve battles against the Lizardmen unless you’ve got a decent stack (or two armies reinforcing one another). For some reason, war wagons are weighted oddly and they end up getting destroyed too easily when auto-resolving. 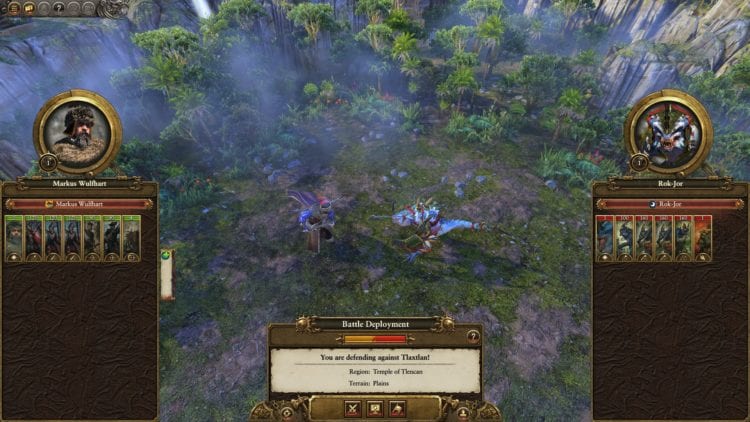 Seriously, don’t auto-resolve from the early to mid-game part because war wagons get obliterated too easily.

The Hunter & The Beast – The Final Battle

Wulfhart’s campaign will eventually lead you to a climactic conclusion against Nakai the Wanderer and an unceasing tide of Lizardmen blessed by the Old Ones. You’ll need to have 100 acclaim at the start of your turn to start “The Battle for Itza.”

I won’t spoil how things go, but it can be rough if you’re unprepared so make sure that you’ve got your anti-armor and anti-large troopers. You will be losing a number of soldiers especially once the giant reptiles start charging at you.

Fortunately, your Legendary Hunters can help turn the tide of battle. The “Ubersreik Four” provide certain boons all throughout the fight. For instance, Jorek Grimm (Bardin) lets your units periodically replenish ammo, while van Hal (Saltzpyre) will call on allied reinforcements to help out.

Note: If you do want a more detailed look at what transpires during the final battle (and my army composition), head over to our Battle for Itza guide right over here. 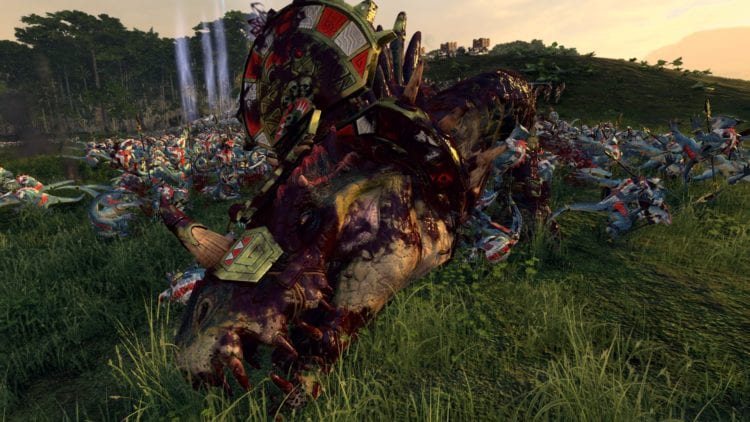 Overall, Markus Wulfhart’s progress in The Hunter & The Beast DLC feels quite unique and it’s a definite change of pace considering that he’s the first actual Empire lord in Total War: Warhammer 2. With the Emperor’s Mandate, Imperial Supplies, and hostility mechanics to consider, you’ve got a challenging campaign ahead of you.