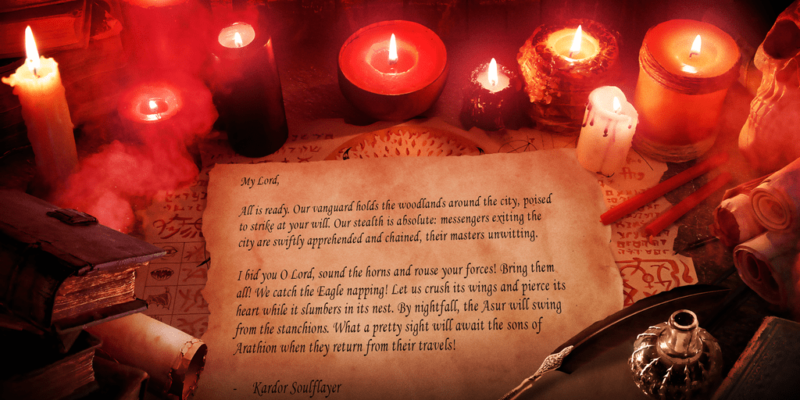 Somebody seems to have stepped on the marketing accelerator for Total War: Warhammer 2 today. As well as the previously posted High Elf gameplay trailer, there’s a new in-fiction ‘teaser’ letter out there indicating something about Dark Elves.

Update: Yep, there’s a trailer coming on 13 July. See an extract from that, here. Rest of the previous story follows.

That’s on top of the long-term ‘ritual’ stuff that looks very much like it’s leading to an eventual Skaven reveal. Maybe Creative Assembly intend to build up to a Dark Elf vs Skaven combo reveal battle video. At this stage, it’s hard to tell.

Anyway, this new bit of penmanship is written by a ‘Kardor Soulflayer’, which is an awfully Dark Elf name. It details a plan to ambush the hated ‘Asur’ (High Elves) during the night. Again, pretty standard operating procedure for the Dark Elves.

So, to summarise, in the near-ish future Creative Assembly will be showing the following: something to do with Dark Elves, a proper Skaven reveal, whatever the free ‘Old Friend’ DLC turns out to be, and the faction pack for the original Warhammer that’s also a pre-order bonus for Total War: Warhammer 2. All of that before the game comes out on 28 September.

Here are my predictions for the Dark Elf and Skaven army rosters, respectively.