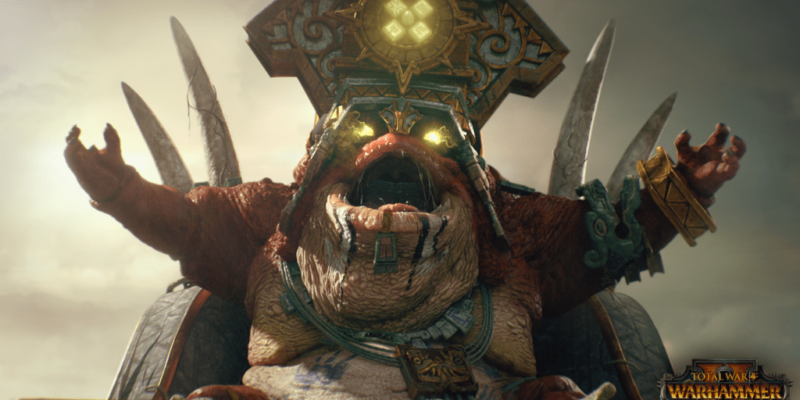 The Total War countdown clock has tolled, revealed what many anticipated (given the clues): Total War: Warhammer 2. Listed on Steam as due later in 2017, the sequel will introduce a whole new continent and four new races: High Elves, Dark Elves, Lizardmen and (though not yet directly named, it’s pretty clear) Skaven.

In this second installment, the big deal objective event will be a faltering Vortex, originally set up by the High Elves as a kind of power over-spill from the Chaos Wastes. The High Elves want to repair it, the Lizardmen want to as well (but with their own ancient methods and agenda). Witch King Malekith and his Dark Elves want the Vortex to fail, probably just because they think it’ll be funny, or because it would wreck the High Elves and they love that.

The Skaven have only been teased rather than confirmed, so it’s not clear what they want. Probably for the Vortex to fail as well, though. Especially if there’s a way they can get warpstone at the same time.

Once again, each race will have two Legendary Lord options (at first, anyway), and “a distinctive new playstyle with unique campaign mechanics, narrative, methods of war, armies, monsters, Lores of Magic, legendary characters, and staggering new battlefield bombardment abilities.” Creative Assembly have a plan for combining the campaigns of Total War: Warhammer 2 and the first Total War: Warhammer into one mega-map, but that capability will only be coming after the launch of the sequel.

Looks like we’ll be seeing “Naggaroth, Lustria, Ulthuan and the Southlands” on the Warhammer 2 map. Here’s a cinematic announcement trailer thing.