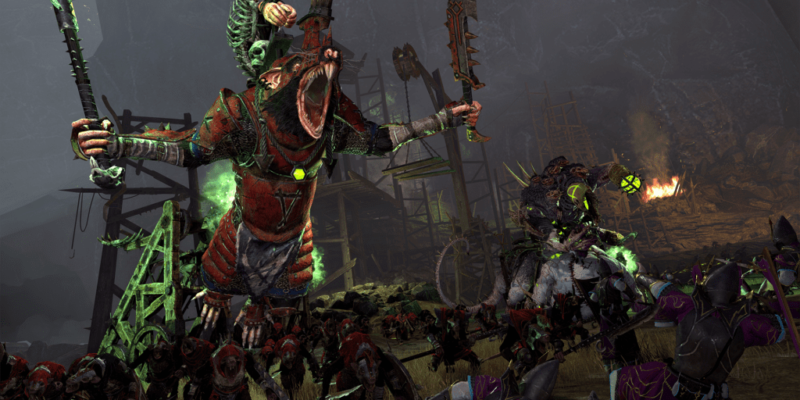 The rat is out of the bag, Skaven were announced today as the fourth faction in Total War: Warhammer 2. If you’ve been following the game at all you’ll already have known that, but it’s nice to have it officially confirmed with a pair of trailers and some details.

Here’s what is known, based on the information available today. The two Legendary Lords will be Queek Headtaker (Clan Mors) and Lord Skrolk (Clan Pestilens). Both appear in the Skaven campaign intro video (below), though Queek is in it more than Skrolk. A character who looks an awful lot like Thanquol is in there too, probably suggesting he’ll be a Legendary Lord in the game at a later date. Queek also appears in the in-engine announcement trailer (again, below).

Judging by the campaign map released the other day, Pestilens will (probably) start in the big set of ruins in the middle of Lustria, and Mors will be in the large ruin in the Southlands. The in-engine trailer also confirms a few Skaven units for Total War: Warhammer 2 – the Doomwheel, the Hell Pit Abomination (it eats the poor dragon), and Warpfire Thrower teams. Creative Assembly will be revealing the full Skaven unit roster on Friday (18 August).

Here’s the in-engine trailer, the campaign intro (from today’s Ritual reward), and a few screenshots.