It’s been a while since we last checked on Total War: Warhammer 2. The previous DLC or Lord’s Pack for the game was The Prophet & The Warlock which introduced Ikit Claw and Tehenhauin. I can tell you that playing as Ikit Claw was an absolute blast indeed! Fast forward to the present, and we’ll see a new Lords Pack DLC called The Hunter & The Beast. It’ll feature two new legendary lords — Markus Wulfhart for the Empire and Nakai the Wanderer for the Lizardmen.

Check out the trailer below:

Markus Wulfhart leads the Empire’s forces anew in The Hunter & The Beast. As Emperor Karl Franz’s Huntsmarshal (the Captain of the Scouts), Wulfhart’s background even encapsulates this as he rigorously attempts to expand the Empire’s domains in the harsh jungles of Lustria, and his men have desecrated the sacred temples of the Lizardmen.

Emperor’s Mandate: The Emperor’s Mandate is a unique campaign mechanic for Markus Wulfhart. As he continues to conquer for the Empire’s glory while fulfilling certain objectives, his acclaim grows. As such, better Empire troops flock to his banners.

Wulfhart’s forces also need to watch out for hostility. The men of the Old World are merely visitors to these harsh new lands and, as such, their presence is never welcome. Lizardmen will assail him should hostility reach high levels. Thankfully, Wulfhart can also call upon the aid of four of the world’s greatest hunters. These special heroes have their own backstories and their services can be obtained from various missions.

If Wulfhart’s expansion proves to be successful, then, perhaps, he might end up facing none other than the champion of the Lizardmen in a climactic battle.

Wulfhart’s exploration of new lands would not be met without an answer. The deafening roar will come from The Hunter & The Beast‘s other legendary lord, Nakai the Wanderer.

Nakai is an ancient Kroxigor warrior revered by all, most especially by the Skink Priests of the Lizardmen.  Nakai wanders to and fro, seeking to defend his brethren. He was also known to have defeated the armies of Luthor Harkon in the past. You might remember the undead buccaneer from Total War: Warhammer 2‘s Curse of the Vampire Coast DLC.

Horde Mode and the Defense of the Great Plan: For Nakai the Wanderer, his progression through Total War: Warhammer 2‘s campaign is also unique. Like the rampaging Warriors of Chaos and Beastmen, Nakai commands horde forces that can build new structures as an army moves off. However, only Nakai’s personal army can unlock upgraded units. If the champion is able to do so, then the other armies will be able to use these units as well.

Nakai also has vassals known as the Defenders of the Great Plan. When Nakai captures a settlement, he can gift these territories to his vassal. In doing so, he can dedicate a temple to a particular Old One, the gods of the Lizardmen, which confer bonuses for his armies. These temples also provide favors which you can spend to obtain Blessed Spawning units.

Naturally, Nakai would have a tough test ahead. The Empire’s expansion cannot remain unchecked, and he must find the four hunters that are commanding enemy forces. Should Nakai defeat them, then he’ll face Wulfhart in an ultimate battle. 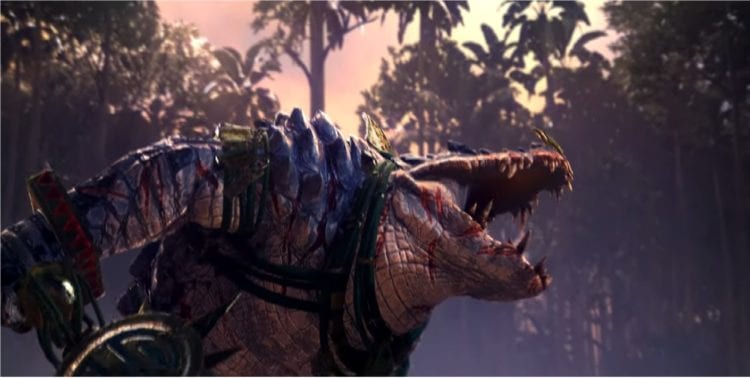 The Hunter & The Beast DLC will also add the largest playable unit in Total War: Warhammer 2. It’s none other than the Dread Saurian. With the divine blessings of the Old Ones, this terrible juggernaut crushes and annihilates its foes. More units also join the fight such as Empire Huntsmen, War Wagon, Kroxigor Ancients, and the Razordon Hunting Pack.

There’s also a free update and a free legendary lord that’s included for all Total War: Warhammer 2 players. The update will introduce reworks to the Old World factions, which can add some refreshing takes on the previous game’s characters especially when they duke it out in Mortal Empires.

The “free-LC” lord is none other than the Lizardmen’s Gor-Rok. The Great White Lizard is one of the most renowned Saurus warriors in history. 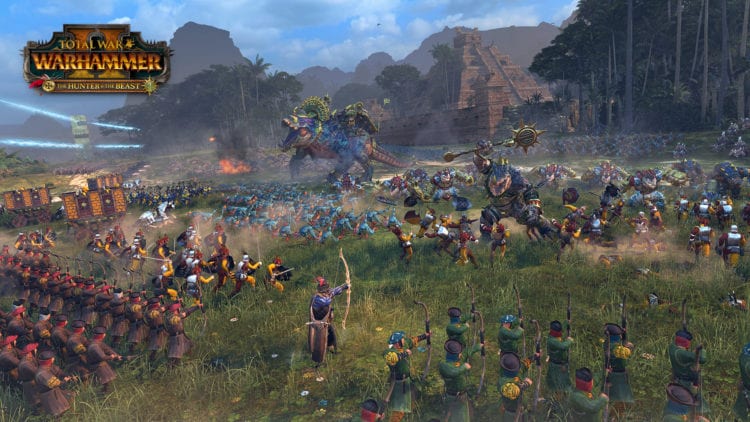 The free update will add a new province (Solland) which is south of the Empire’s territories. That’ll be Balthasar Gelt’s new starting location as he leads The Golden Order faction. More provinces have also been added from the Old World to Albion, and Greenskin and Wood Elf minor factions have been added to the Empire’s borders. A new map type for battles will also be present which allows for tactical warfare situated at an Empire Fort settlement.

Oh, and one more thing — remember those promotions for Empire officers? Forget about the old system. The free update that comes along with Total War: Warhammer 2‘s The Hunter & The Beast DLC will do away with that. Instead, you’ll have 13 new positions to manage as the Empire, using new resources that allow you to exert authority over your lands. Those 13 new positions are so you can finally SUMMON THE ELECTOR COUNTS!

Total War: Warhammer II‘s The Hunter & The Beast DLC/Lords Pack will be available on September 11. It’s currently priced at $8.99 and you can find it via the Steam store page. You can also take a look at the official blog for Creative Assembly’s Total War franchise for more info. We’ll definitely be on the hunt in early September when the new legendary lords enter the fray.

Little Hope, the sequel to Man of Medan, has been revealed

Microsoft Flight Simulator 2020 — Will it be a comeback or a crash?