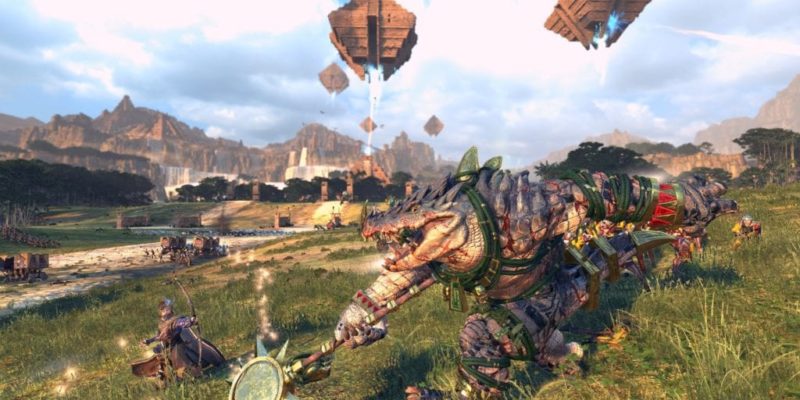 The Hunter & The Beast, the newest DLC for Total War: Warhammer 2 introduces two legendary lords — Markus Wulfhart for the Empire and Nakai the Wanderer for the Lizardmen. Neither of them would be interested in the Vortex mechanics. Instead, they’ll clash in a climactic final battle (the Battle for Itza) that serves as the ending to their respective campaigns. Here’s our mini-guide on what you can expect from The Hunter & The Beast‘s final battle and how to defeat your rival lord.

Note: You can also check out our Total War: Warhammer 2 – The Hunter & The Beast guides and features hub for more info. 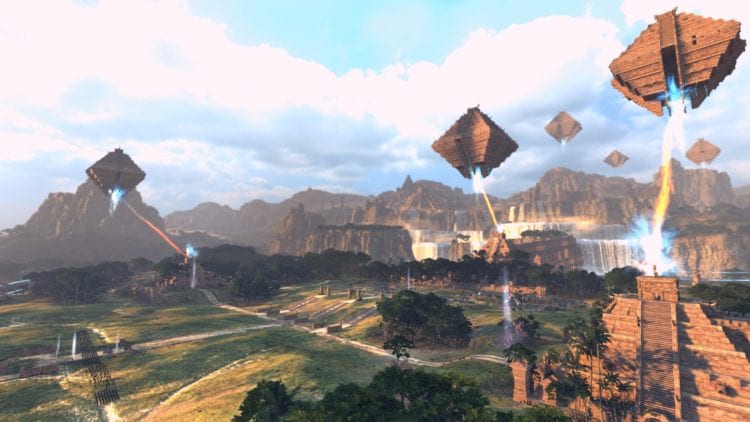 Acclaim/Emperor’s Mandate is obtained as you progress through the campaign. You can check out our Markus Wulfhart campaign guide for more info.

The Spirit of the Jungle is Nakai’s faction. You don’t even need to do anything to see it destroyed. Nakai’s AI has no idea how to play Total War: Warhammer 2, and he’d end up getting eliminated in less than a dozen turns after you start the campaign. 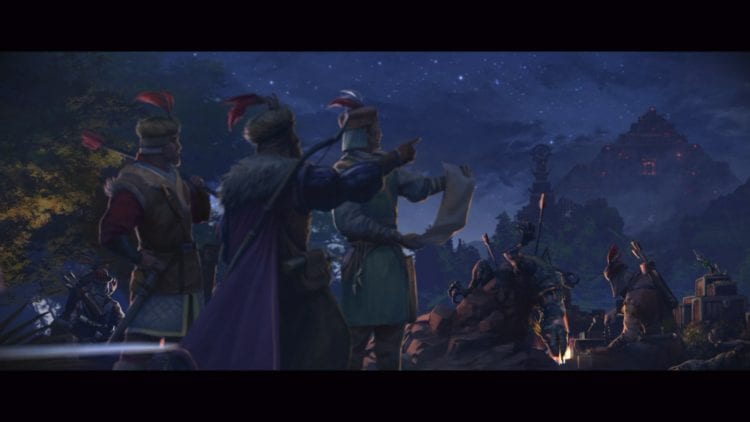 As for the Battle for Itza, it can be a bit tough. The Huntsmarshal’s forces from the Empire have more range and firepower compared to Lizardmen, but these defenders of Lustria can easily swarm you. That’s where your four Legendary Hunters come in. All four provide unique benefits to the Battle for Itza that can swing the pendulum in your favor. You can refer to our Legendary Hunters guide to know where to find them and how to complete their mini-quests.

In any case, once you’ve obtained 100 Acclaim/Emperor’s Mandate, a short cinematic will fire and the Battle for Itza becomes available. You can start it whenever you want to put an end to Nakai and the Lizardmen threat. 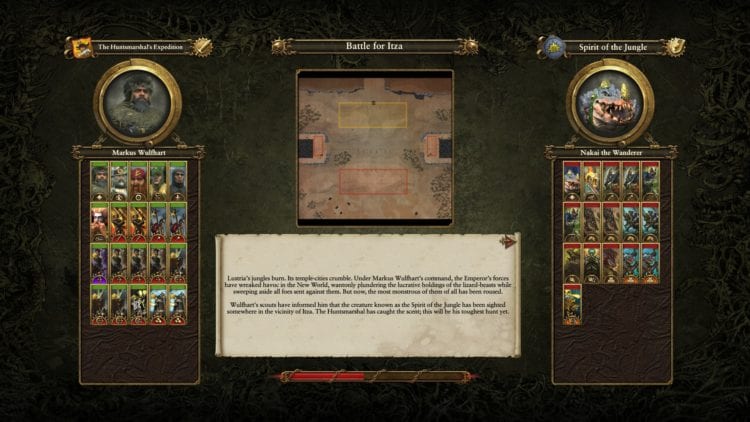 Markus Wulfhart – The Battle for Itza

Nakai’s troops arrayed against you include the following:

But, you also have to contend with two Slann Mage-Priests — one to your left and the other to your right. The two are defended by Temple Guard units.

Every minute or so, as long as these Slann are alive, they’ll summon feral dinosaurs such as Cold Ones and even Stegadons. The goal is to eliminate them quickly to prevent your forces from being overrun by monstrous foes. 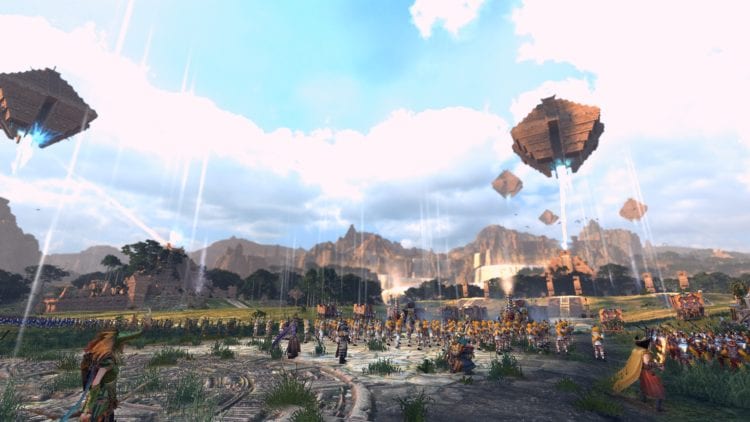 In my case, I had the “Ubersreik Five” (the four Legendary Hunters plus a random Bright Wizard acting as my bearded Sienna). Here’s what they brought to the fight:

My army had two Greatswords, two Halberdiers, and four Huntsmen. I didn’t have a lot of infantry or even Demigryph Knights, but I did have loads of artillery. I had three War Wagons (Mortars), two Steam Tanks, and a Luminark of Hysh. These came from Wulfhart’s Imperial Supplies campaign mechanic. 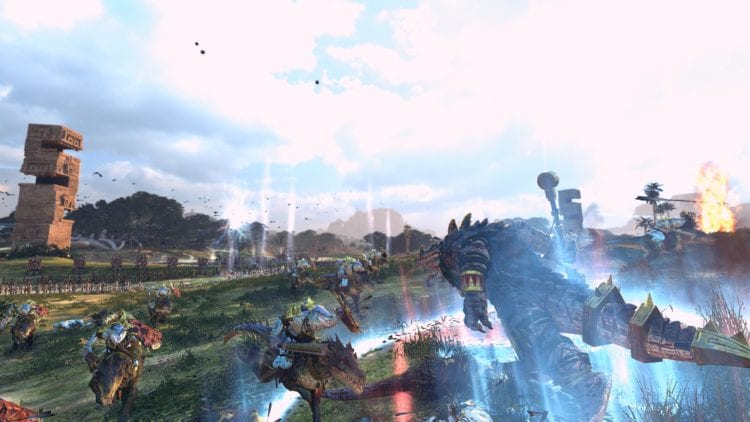 Wulfhart’s Battle for Itza will start with Kalara breaking the Lizardmen shielding which makes Nakai’s forces advance. As for Wulfhart’s army, you’d want to pick a Slann Mage-Priest to focus on. I chose to head to the right-hand side first.

My Greatswords and Halberdiers were arranged in a line to stop rampaging dinosaurs, and my Huntsmen took out enemies from a distance. The Lizardmen have no hope of outgunning you here thanks to loads of artillery and Jorek’s buffs. I also used my Steam Tanks and Luminark of Hysh to take out the Slann Mage-Priest from afar to stop his ritual. 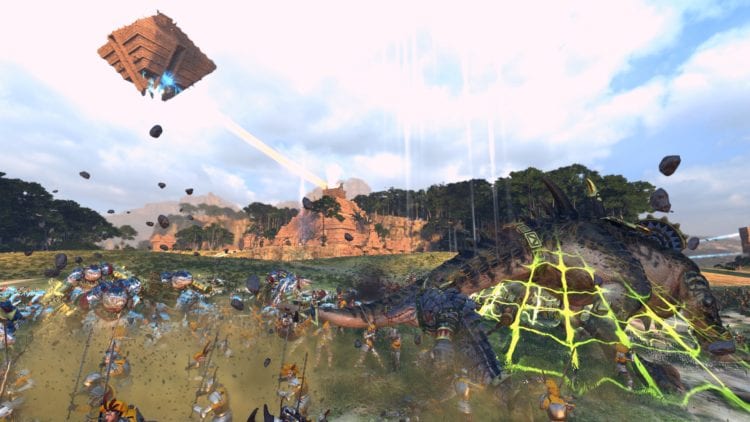 Rodrik and Hertwig were at the front of my battle lines, engaging others in melee combat. I used Kalara to net the Feral Dread Saurian, followed by the Accusation debuff from Hertwig. It died within a minute after being peppered with arrows.

Given that Rodrik’s final battle effect will lower Nakai’s resistances, the guardian of Lustria actually died within a minute as well. Wulfhart’s coup de grâce was an Executioner and Amber Bow shot to finish off Nakai. 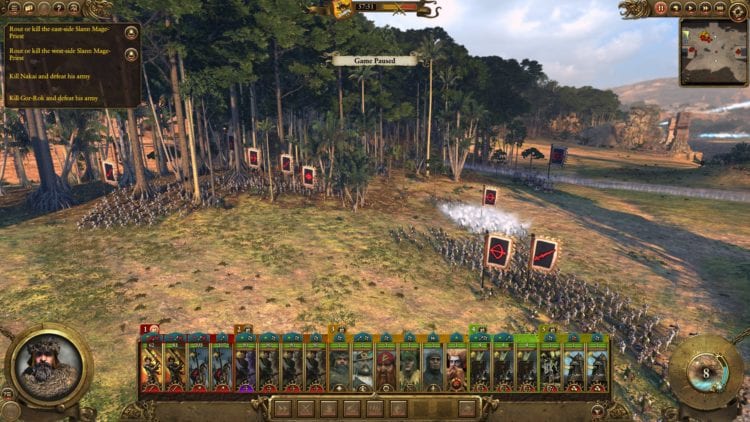 It was also around this time that Hertwig’s Battle for Itza bonus (army reinforcements) popped up. Several of the units are Greatswords and Huntsmen. Now that’s just fine and dandy against the Lizardmen. You can’t control these guys at all but they will beeline straight for the enemy forces.

Move your own troops back if you need to have a breather. That’s because Gor-Rok will also join the fray.

Now, because you’ve got an entire army of Greatswords and Huntsmen taking down Gor-Rok, you can safely nuke his force of Saurus and Bastiladons from afar. Around this time, the Slann Mage-Priest from the left side temple will panic and it’ll make its way towards you. Kill Gor-Rok and the toadman and you’re done. 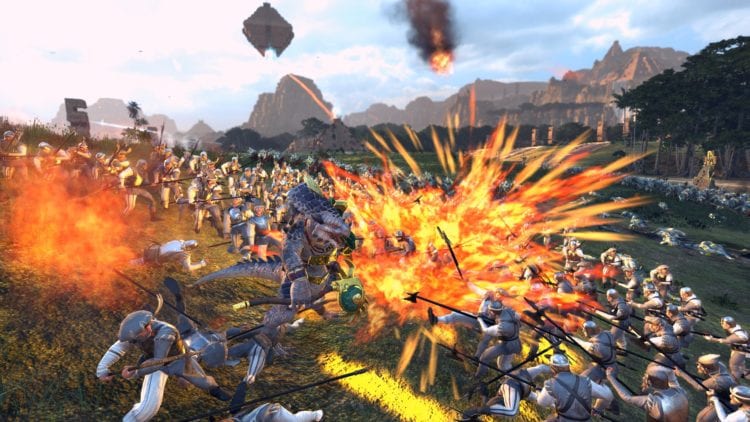 Wulfhart’s version of the Battle for Itza can be very easy especially if you build your army composition properly. Ideally, you’d want to bring some extra Greatswords or even Demigryph Knights, although my army composition worked as well due to the artillery.

What made the final battle laughable was because of all the bonuses conferred by the four Legendary Hunters. I was singing:

He’s the Spirit of the Jungle but the Great Plan’s awry.

He charged his foes, bringing dinos that fly,

Not knowing this’ll be the day that he dies.

This’ll be the day that he dies. 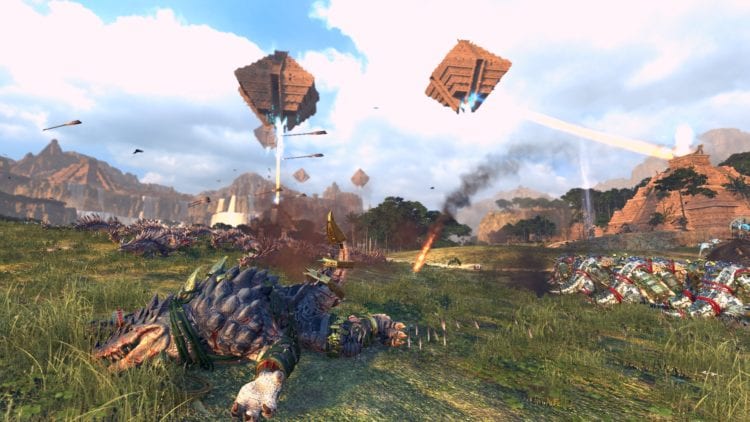 Giving settlements to your vassal and erecting Temples to the Old Ones isn’t difficult at all as Nakai the Wanderer. What can be a challenge is managing your economy since he does start out fairly slow. Wulfhart’s faction won’t get destroyed early in the game unlike the poor Spirit of the Jungle. In fact, the Huntsmarshal has around half a dozen settlements already once you start, and he’s not done expanding yet. You can check out our detailed Nakai the Wanderer campaign guide for more info. 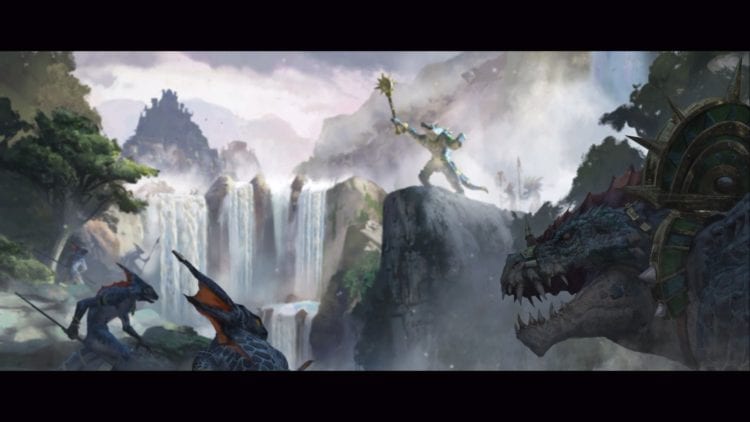 Anyway, to get the final battle to pop up, all you need to do is defeat Wulfhart’s four Legendary Hunters during Nakai’s Total War: Warhammer 2 campaign as they’re part of missions. You can do this by encountering them in battle, or you can even send heroes to wound or assassinate them. 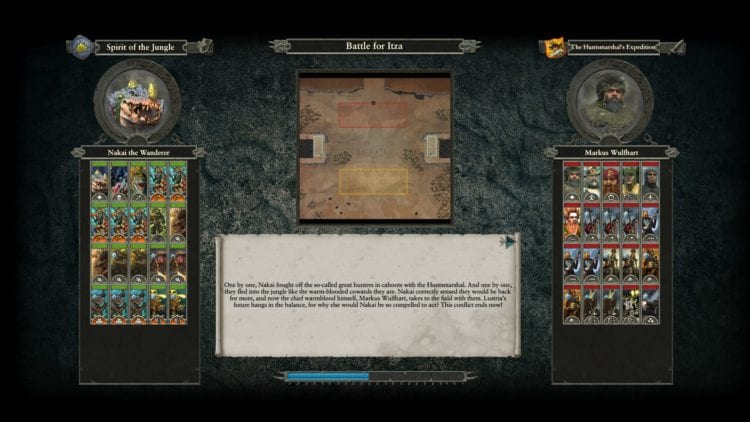 Nakai the Wanderer – The Battle for Itza

Wulfhart’s troops arrayed against you during the final battle include:

You might be asking where the Greatswords and Huntsmen are? Well, a full contingent will arrive as reinforcements as promised by his Witch Hunter.

I thought I messed things up for Nakai’s final battle even though everything miraculously worked. My army was comprised of: 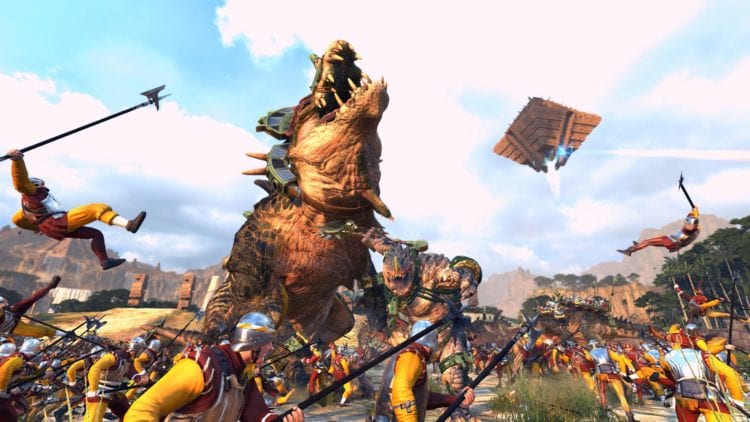 Oh well, I wouldn’t necessarily call this an opening move. I just threw Nakai, my Saurus Scar-Veteran, and all four Saurians into the fray. Everyone punched through the center of Wulfhart’s armies. Units and heroes being thrown all over the place definitely ruined all semblance of cohesion.

While this was going on, reinforcements were attempting to take over the temples off to the side (the ones defended by Slann Mage-Priests). I used Salamanders and Bastiladons to nuke them from afar. My Temple Guard held the line, picking off infantry that were trying to focus on my monstrous units, while my Kroxigors harried the enemy’s flanks. 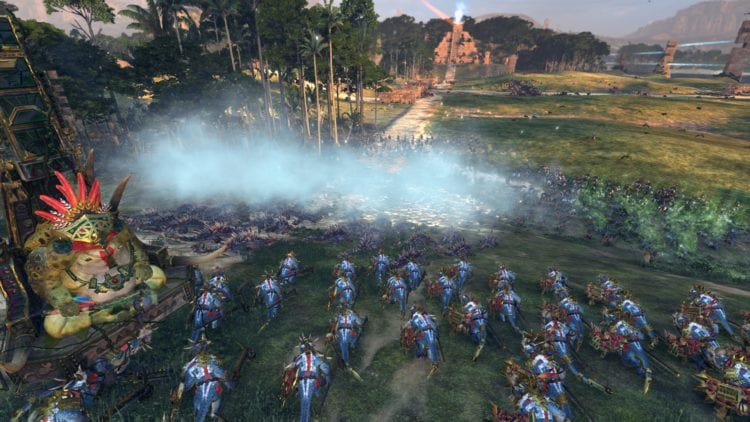 I mentioned how summons are important in the Battle for Itza, and, sure enough, they played a pivotal role. These were the summons I had:

I used these summons on Wulfhart’s artillery as well as on the troops harrying the temples. Because I was able to defend the temples and prevent the Slann from routing, they also kept summoning more and more dinosaurs (Cold Ones and Stegadons) to harass Wulfhart’s scattered forces. Needless to say, the chaos in the battlefield did not do the Huntsmarshal any favors. 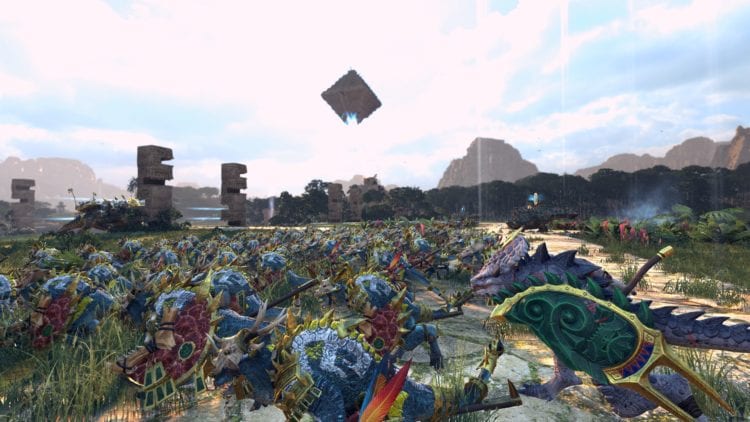 With Wulfhart’s army in disarray, I pulled back some of my units that were getting too excited. I also used the lord and hero ability to prevent beasts from going crazy, while using skills and spells that bolstered melee defenses.

Soon enough, Gor-Rok’s army arrived. His Saurus and Bastiladon forces made a mad dash towards the remaining hostiles. I made sure to let them take the brunt of the damage this time. Wulfhart’s reinforcements had Greatswords and Huntsmen which would be a pain in the butt for my behemoths. Overall, I was surprised that throwing battlefield tactics out the window and just punching forward with your heavy-hitting dinosaurs worked wonders. 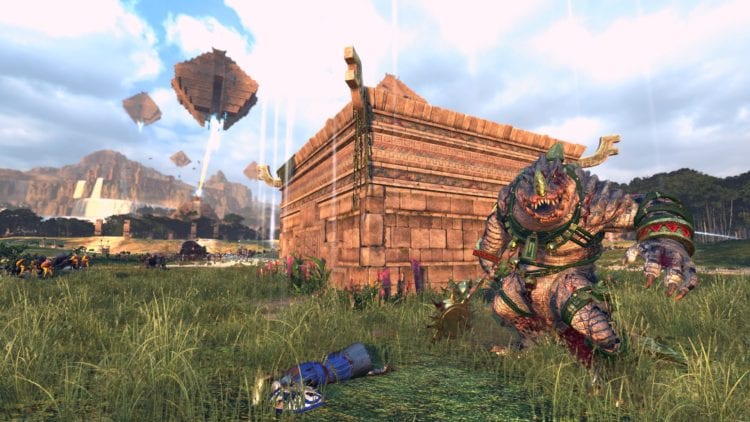 If you’re quick, you can get Endless Space Collection free at Humble