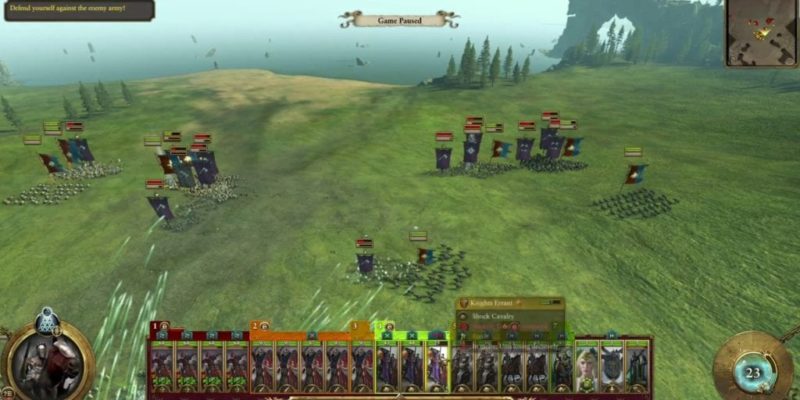 Creative Assembly have realigned some lances and shaken up some Men-at-Arms in a new Total War: Warhammer patch focusing on the Bretonnian forces. It’s been in public beta since Friday, but today has gone live for all players.

As well as changes to Bretonnia, this update wipes the Total War: Warhammer multiplayer scoreboards and imposes a new penalty for anybody caught ‘drop-hacking’ (dodgy disconnects, basically). There’s also this fix: “Chivalry is no longer gained for torturing people”. Seems fair enough, really.

In other Warhammer news, it looks increasingly likely that the second game (of three) in the series will be announced or revealed in some fashion this coming Friday. Here are the Bretonnia patch notes.

The Total War: WARHAMMER multiplayer leaderboards have been reset.
A 5% score penalty will now be applied to users caught drop-hacking from multiplayer battles (disconnecting under suspicious circumstances).
Fix for users becoming unable to save the game, after the last chapter mission is completed on Legendary difficulty.
Fixed a missing building chain in the Grung Zint settlement.
All income types from Farming/Industry bonuses are now being applied correctly to all resource buildings.
Fixed a rare crash when disbanding Heroes on the campaign map.
Fix for Guardians of the Lady skill giving magic resistance instead of missile resistance.
Fix for Gelt’s Pegasus unlock level.
Fix for inconsistency between Strigoi and Ghorst spells and the main lore spells.
Chivalry is no longer gained for torturing people in during Quests.
Updated garrison for Couronne and removed wall building chain.
Various text, game guide and localisation fixes.