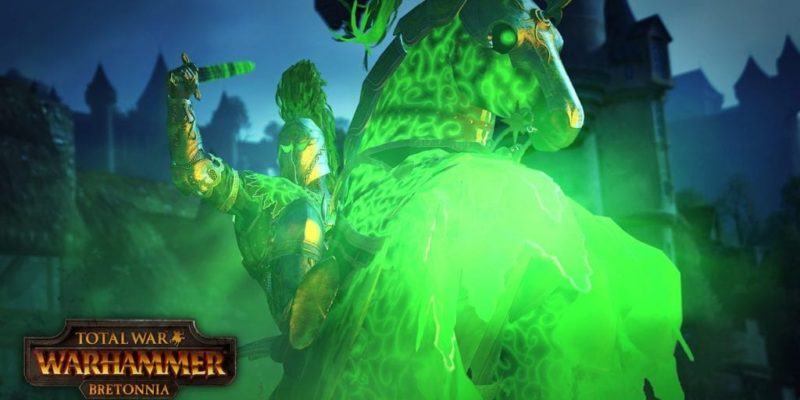 After spelling out some Bretonnian roster changes, Creative Assembly have now released more details of how the faction will function in the Total War: Warhammer campaign. That information comes from the free DLC’s Steam page, which went up today.

Bretonnia will be able to call on three Legendary Lords; the already present Louen Leoncoeur (Bretonnia), along with Duke Alberic (Bordeleaux), and The Fay Enchantress (Carcassonne). Their armies can otherwise be led by Lords and Prophetesses. The latter can use the Lores of Beasts, Heavens or Life, and both can invest in “Knight’s Vow, the Questing Vow [or] the Grail Vow” to drastically reduce upkeep for the respective Knightly Orders.

For Heroes, the Bretonnians can employ Paladins and Damsels. Like the Prophetesses, Damsels can use magic from the Lores of Beasts, Heaven or Life. The Paladins are symbols of chivalry and valour, and can be mounted on a Pegasus.

In Total War: Warhammer’s campaign, the Bretonnians will have a meter tracking the level of chivalry in the realm. Performing mighty and heroic deeds (“winning heroic victories in battle and completing quest chains” for example), will raise the chivalry and convey bonuses like a contented peasantry, or extra unit experience. Low chivalry will bring problems like reduced leadership and rebellion.

Overall campaign victory as Bretonnia will depend on maintaining high enough chivalry to trigger the “Errantry War”, a climactic final battle. You’ll also need a lot of chivalry if you want to call on the special Green Knight hero. When called, the Green Knight will be available for a limited number of turns, with preset skills, to aid you in battle.

Meanwhile, you’ll need to keep an eye on your feudal economy, which depends on the peasantry to function. Each region of the map will contribute a certain number of peasants, and these need to be balanced between your armies and agricultural labour. It’s possible to ease the burden of warfare by industrialising to some extent, but this early industry will provided reduced income compared to agriculture. Further technologies can boost the industrial income.

In addition to all of that, actions like heroic victories in battle can result in the Blessing of the Lady. This means the leader and army “thenceforth receive a Ward Save for future battles.” Just as quickly as the Blessing is granted, however, it can be lost by unheroic actions like humiliating defeats. Some units, like Grail Knights, automatically have the boon of the Blessing.

Here’s the full unit roster for Bretonnia, followed by their opening cinematic.

The Bretonnian faction will be released on 28 February, and is free to all owners of Total War: Warhammer. It’s possible to get them 24 hours early if you sign up for Creative Assembly’s ‘Access’ program through the Total War forums.

By Laura Shortridge-Scott50 mins ago
News