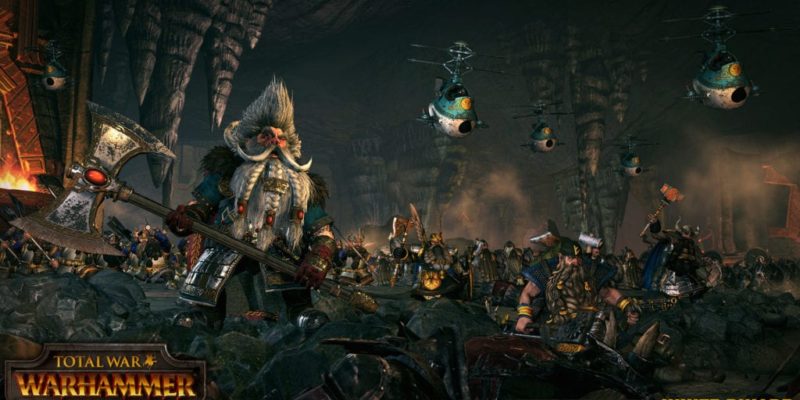 It looks like Vlad is going to have some competition in the ‘most ridiculously powerful Lord’ arena, based on Grombrindal’s skill array for Total War: Warhammer. Creative Assembly have detailed some of the White Dwarf’s skills today, and they’re … quite good.

‘Absolutely Relentless’ will (at Tier 3) enable +15% movement range for all characters faction-wide, while ‘Eager Kin’ (again, at Tier 3) can reduce faction-wide recruitment costs by 15% too. ‘Grombrindal Has No Fear’ meanwhile, gives (unspecified) boosts to melee defence and leadership to all allied forces on a given battle map.

‘Ancient Acumen’ adds unit experience (+3 at Tier 3) to all recruits, faction-wide. And ‘Flash Bang!’ allows Grombrindal to deploy black-powder charges in battle that stagger and disorientate enemies (possibly like the Nasty Skulker’s smoke bombs, though that’s not clear yet). Like other Total War: Warhammer Legendary Lords, he’ll be able to embark on quests for additional equipment.

To get hold of Grombrindal, you either have to buy November’s White Dwarf magazine for a code, pop into a Games Workshop from 28 October onwards and ask for a code, or wait until 2017 when he’ll be free for everybody. 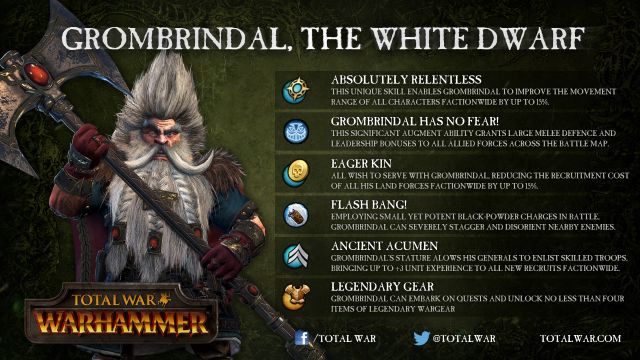