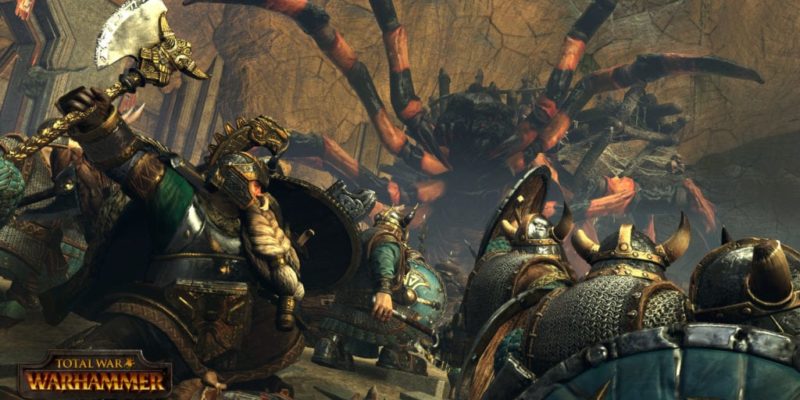 It can be easy to read too much into off-hand tweets, but something from the Total War: Warhammer account today seems to point at the next DLC release. With Empire and Vampire Counts getting a roster boost from the Grim & the Grave DLC, most have assumed that the Greenskins and Dwarfs would get similar treatment.

News on that front might be showing up this week, if the message “And for everyone else, who may be feeling a little green, don’t worry if you’ve come up short – the week isn’t quite over yet…” (bolding my own) is saying what I think it’s saying. It’s already known that November’s White Dwarf magazine is running a Grombrindal (Dwarf hero) tie-in with the game, which would also fit with a Dwarf/Greenskins pack appearing this month or next.

If that’s the case, expect a new Legendary Lord for both factions, along with some extra Total War: Warhammer units (fingers crossed for cave squigs), and Regiments of Renown. The next major faction addition is still rumoured to be Wood Elves, who could be released with the previously-promised single player campaign and roster boost for Bretonnia; if accurate, that’s now likely to be later in the year.

Unusually for this game, nothing official has leaked ahead of time, so this remains in the realm of speculation and interpretation. Update 11 October: A new teaser letter strongly indicates the next DLC will indeed be Greenskin and Dwarf themed, with an emphasis on the Eight Peaks.