The PC Invasion Total War: Warhammer review will be appearing in the next few days, and in the process of dealing with quarreling Elector Counts, sinister Vamps, and a whole lot of Chaos spawn I’ve picked up various shortcuts and techniques for manipulating unit formations. These will probably be known to serious Total War veterans (though some might not, you have to delve around to find some of this stuff out), but should prove useful if you’re fresher to the series.

Though this information won’t automatically win you any battles, being able to efficiently get your troops moving in the manner you desire is both helpful and satisfying. The less time you have to spend faffing about micro-managing each and every unit, the better.

Creating hotkey groups is probably the most straightforward way to get a modicum of order instilled in your Total War: Warhammer troops (yes, even if they’re orcs). This is pretty standard stuff for real-time strategy games on PC, but, in case you’re not aware of it, sets of units can be assigned to control groups by highlighting/selecting the desired units and pressing Ctrl plus a number key.

Select all your spearmen, stick them in a group with Ctrl+1, and you can get them quickly set up as a nice front line screen. Whenever you need to select them all again, just press 1 (or 2, 3, etc). Useful for the heat of battle if you want to quickly select a specific group of troops without clicking on their unit cards. 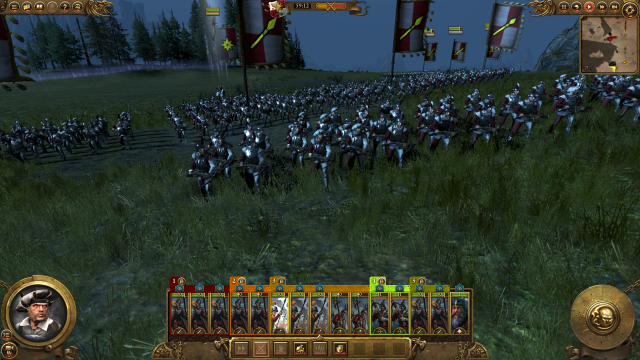 There are also default hotkeys for quickly selecting all units of a specific tactical type. Ctrl+I will select all infantry, Ctrl+M for missile/archer troops, Ctrl+C for cavalry, and Ctrl+B will select all artillery.

The J key is another handy one. Pressing this will make any selected units do a 180 degree turn. Very helpful if they’re about to be charged from behind and you’re able to react fast enough.

Warhammer doesn’t really have pre-designed formations like some previous Total War titles, but you can set up a melee or missile-focused front with a button on the UI (along the row that has stuff like ‘halt’ and ‘fire at will’). Select the units you want to be reorganised, choose melee or missile, and the game will do the rest.

And while we’re on the buttons on that UI row, ‘guard mode’ (when selected) will tell a unit to not pursue a fleeing enemy and instead hold their ground.

If you have a ranged unit you need to get into melee combat, holding Alt while right-clicking to attack will switch the default ranged attack to a melee one. There’s a UI button toggle for this too, but Alt is usually faster.

Holding space will show you all your issued move orders, as well as where your units will end up. This can be invaluable if you’re trying to keep track of your future positioning. 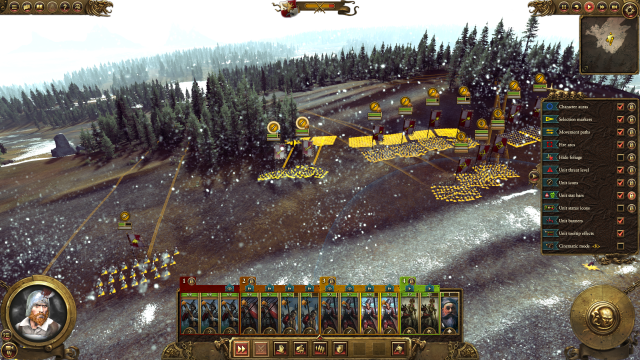 You can also select what types of information show up when space is held.

If you get overwhelmed, always remember you can slow down and outright pause time (in single player, anyway). Hit that pause button and then take all the time you need to issue some orders.

Hotkey-created groups are all well and good, but there’s another layer of grouping in Total War: Warhammer called Formation Groups. When in a Formation Group, as the name suggests, the selected units will try to maintain the formation and spacing they have when the group is created.

To set a Formation Group, either press Ctrl+G when the units you wish are selected, or, if you already have a hotkey group set-up, you can lock their formation (turning them into a Formation Group) with the little padlock icon on the unit card row.

If you issue an attack order to a Formation Group, they will attempt to select sensible target units relative to their formation positions. It’s not as accurate as micro-managing each target, but it’s not too bad. This is in contrast to issuing an attack order to an unlocked hotkey group, which will make them all converge and blob up on the single target you’ve selected. 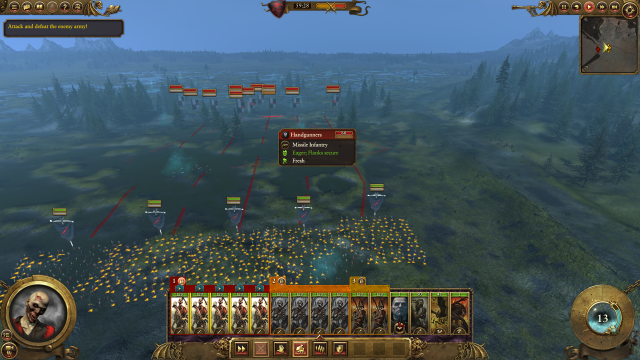 Sending forth a screen of zombies in a locked Formation Group.

To toggle units out of a Formation Group, you can either unlock the little padlock icon, or press G when they’re selected.

Another method of keeping your formation intact while marching into contact with the enemy is by holding Ctrl and right-clicking somewhere behind the enemy lines. Doing this with, say, a line of several units of spearmen, will make them walk towards their foe while keeping formation. Once they hit something, they’ll start combat. Remember to halt any units which don’t make combat-contact with unfriendly units (Backspace, or the UI button), or they’ll continue to just wander forwards.

Yet another method, which doesn’t even involve using formal groupings, is to hold down Alt and then hold the left mouse button with several units selected. Your cursor will become a cross shape and you’ll be able to position your units (in the very same formation as when they were selected) on any point on the battlefield.

The big rock messes things up slightly, but this is using Alt and Left Mouse to move the formation as one block.

Doing the same but holding down the right mouse button instead will allow you to rotate the facing of your units while, again, maintaining the formation and spacing.

Finally, if you fancy channeling your inner Match of the Day pundit during Total War: Warhammer, you can even issue movement orders by drawing on the battlefield. With any units selected, hold Shift and then drag out some flowing sweeps (or boring straight lines, whatever you want) with the right mouse button. Ideal for sending your cavalry in a wide arc around enemy flanks. Or for seeing how your soldiers react when told to march down curiously phallic shaped lines.