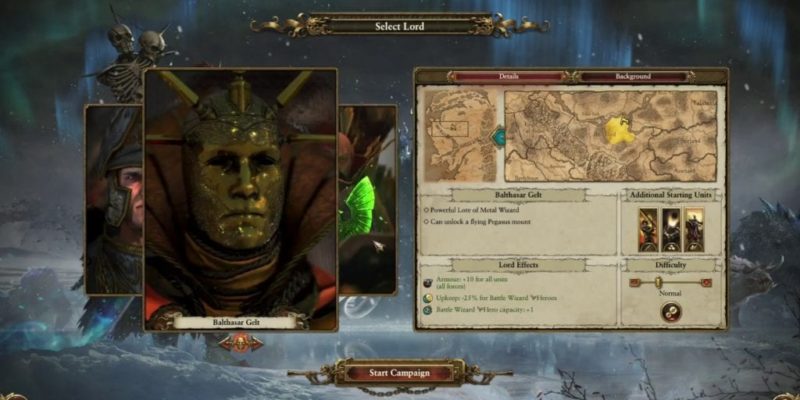 Alongside the DLC release of Norsca, Creative Assembly are updating large parts of the Total War: Warhammer with a ‘Foundation Update’ patch. It’s free, and due this Thursday (10 August).

There’s far too much in it to sensibly do a cut and paste job, but the general intent is to update the original Lords so that they’re more on par (in terms of power and creativity) with the more recent additions. Ten of the original Legendary Lords (basically everyone except Mannfred) have additions to their skill trees, and a large number (old and new) also have new campaign effects.

The Warriors of Chaos have had a significant overhaul too. Some of their tech provides replenishment bonuses, awakened tribes now become vassals (and both provide income and are more loyal), Chaos can now “raze” or “loot and raze” when attacking settlements. Higher tier troops no longer suffer from attrition when in proximity to another stack, and Chaos encampments reduce upkeep by a greater amount. That, plus all of their Legendary Lords have reworked skill trees.

Further additions to Total War: Warhammer with this update include Followers for the Wood Elves (hooray), and a bit of help for the AI version of The Empire. When played by the AI, they’ll start with the whole province of Reikland to give them slightly more of a chance against the increased number of enemies present since release.

Have a read of the full patch notes for more details. There’s a video below showing the new campaign effects, and some new starting units for certain Lords (Azhag, for example). If you’re wondering about the Norsca DLC, here’s our review.

Razer announces the ‘Base Station Chroma’