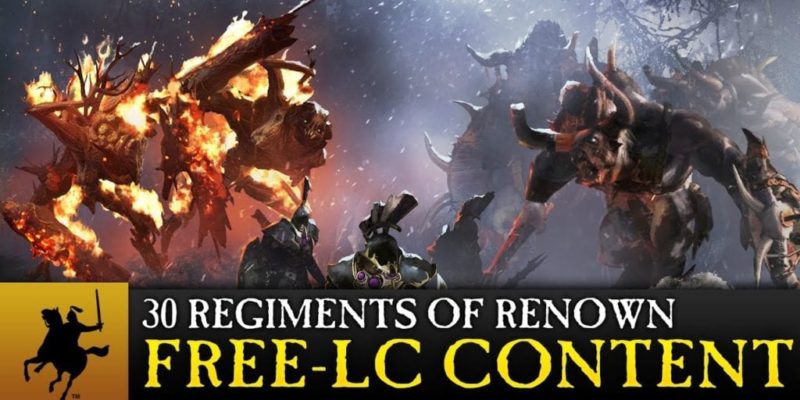 The 30th Creative Assembly anniversary gift trailed the other day is free DLC featuring 30 Regiments of Renown for Total War: Warhammer. It’ll come out alongside the (paid, unless you pre-ordered Warhammer 2) Norsca DLC on 10 August.

Those 30 Regiments will be spread across the five factions who don’t currently have any: Beastmen, Wood Elves, Chaos, Bretonnia, and the upcoming Norsca. They get six apiece. Of course, that means you’ll have to actually own the DLC factions to use them; but at the very least you’ll be able to play with Bretonnia’s, since they’re a free faction themselves.

In a change to prior free DLC policy, you’ll need to be a member of the (also free, besides handing over some email details) Total War Access system. Keys will be handed out through that and redeemable on Steam.

The video (below) goes over a few of the incoming Regiments of Renown, and the FAQ has a little summary for all of them. There’s some good stuff in there, like Sigvald’s Mirror Guard.

It’s possible that more additions may be coming when Norsca releases on 10 August. Creative Assembly have already confirmed that Krell will receive a proper skill tree on that date, so there could be a couple more surprises to come.