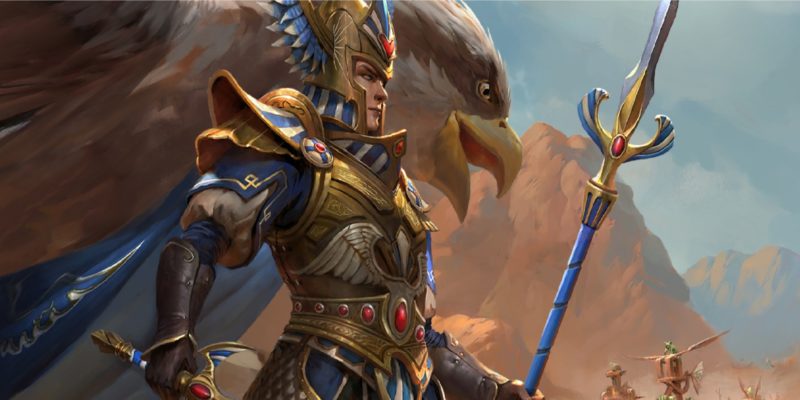 We discussed the warden’s supplies earlier and you probably noticed a couple of missions to eliminate Arachnos. They’re Eltharion the Grim’s early-game baddies in Total War: Warhammer II‘s campaign.

There’s a weak Arachnos army in front of you when you start. If you manually fight the battle and capture the Orc lord using Warden’s Cage, you can interrogate the prisoner and give your Mistwalker units the “Mirror (Waaagh!)” ability. After this, take over the entirety of the Northern Yvresse province and eliminate the Arachnos in Southern Yvresse.

Try to beware of the Pirates of Sartosa led by Aranessa Saltspite as you’re also at war with her faction. If you can, try to catch her in battle so you can interrogate her in Athel Tamarha’s prison. I wasn’t able to gain the Vampire Coast mirror ability during my playthrough which was unfortunate.

Likewise, take note that there will be a short chain of missions after you’ve constructed a Sawyer in Tor Yvresse, so make sure you’re able to complete them to obtain the warden’s supplies quickly:

Note: You can also check out our separate guide for Eltharion the Grim’s unique items and quest battle, as these will be made available early in your Total War: Warhammer II playthrough. 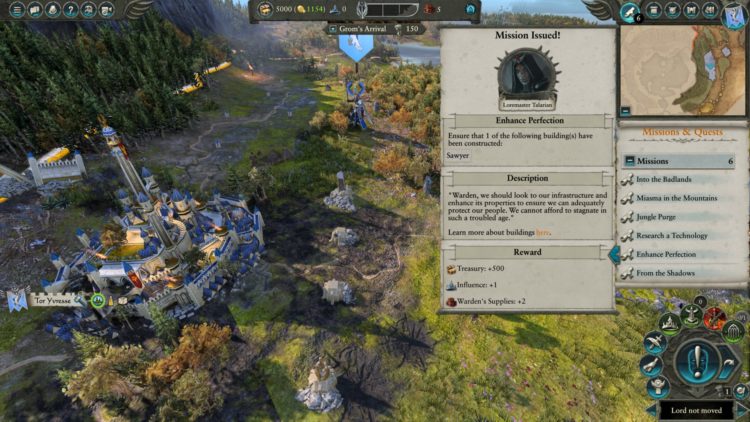 Diplomacy with the High Elves of Ulthuan

While you’re beating down Orcs and Vampirates, make sure you’re befriending your fellow High Elves on Ulthuan. The use of the influence mechanic, combined with gifts, trade agreements, treaties, and warring with their rivals leads to diplomatic success and confederation.

In my Total War: Warhammer II playthrough, I was able to confederate with Saphery first because, as usual, it was being attacked by Tyrion. Since Tyrion took a couple of Saphery’s cities (that would’ve been Eltharion’s), I decided to get close to Tyrion’s lover, Alarielle, confederating with her faction a dozen turns or so later. Your goal is to eventually confederate with the remaining High Elf factions as their buildings will be helpful for amassing gold. 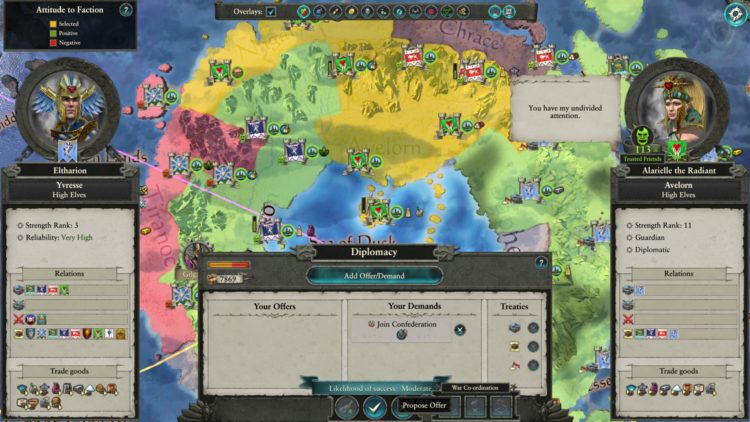 Eltharion the Grim will have a faceoff with Grom the Paunch in 150 turns (which you’ll see as a turn counter at the top of your screen). This is to depict their rivalry from Warhammer Fantasy Battles where Grom successfully led a Waaagh! to invade Ulthuan. Eltharion was the only one who could stop him then, so this final battle is, essentially, a rematch.

Although you have 150 turns to prepare, you don’t need to wait that long. After all, it would be downright tedious to play the same Total War: Warhammer II campaign for 150 turns.

You could opt to capture specific settlements on the campaign map via quests. These provide you with several bonuses, including the generation of warden’s supplies each turn. As such, you’ll be able to obtain those Athel Tamarha upgrades with ease.

Note: Alternatively, you could just click on the “Grom’s Arrival” icon on your first turn and fight the final battle ASAP. It’s going to be a hilariously doozy experience though. 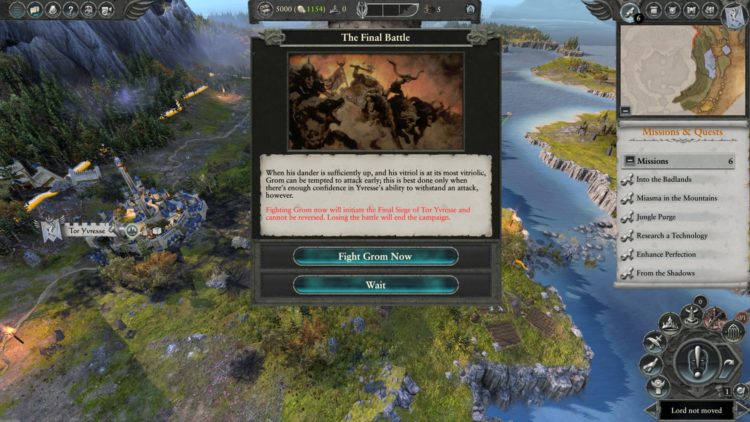 Both Galbaraz and Karag Orrud can be conquered fairly early on in your Total War: Warhammer II campaign. In my experience, Khemri/Settra holds the former, and Grom the Paunch still owns the latter. The good thing is that these leaders are preoccupied in their respective wars, so you can swoop in and take over these lands. 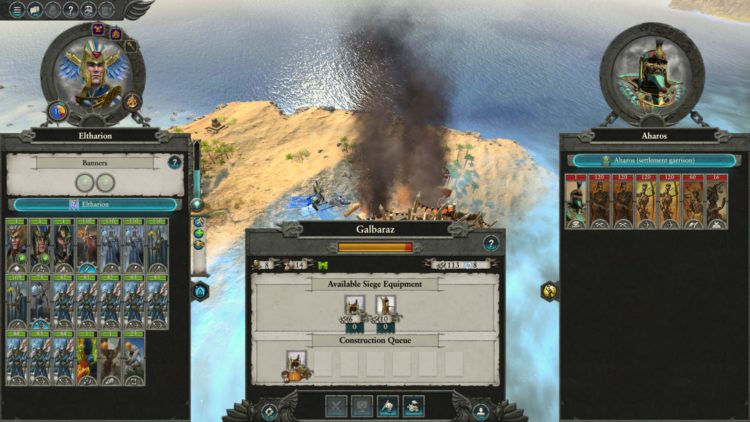 Speaking of Grom the Paunch, he’s quite a pushover on the campaign map. If his faction is eliminated, he might even respawn later and he’ll try to grab new regions (seen below). 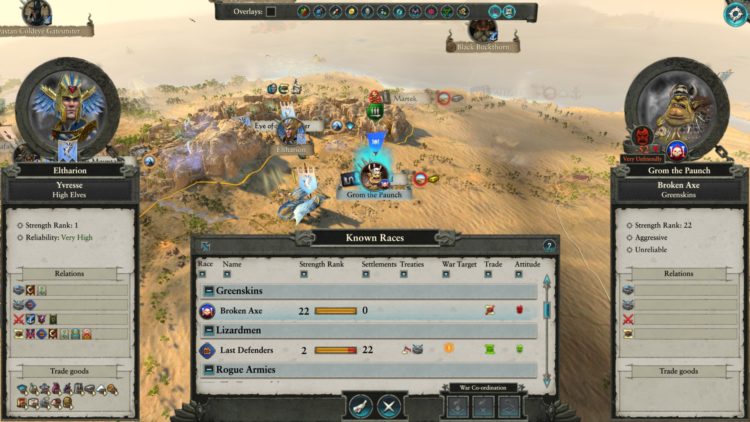 Moving forward, you should send an extra stack to capture Spektazuma much later. It’s possible that it’s lightly defended because Lustria will be a battleground by then. Even if you do lose control of these settlements, the buffs from the quest completions will remain, including the warden supplies generation.

Your best bet is to get in and get out. Don’t bother holding onto these territories since (a) many don’t have a suitable climate which leads to penalties, and (b) you’ll get dragged into unnecessary conflicts. 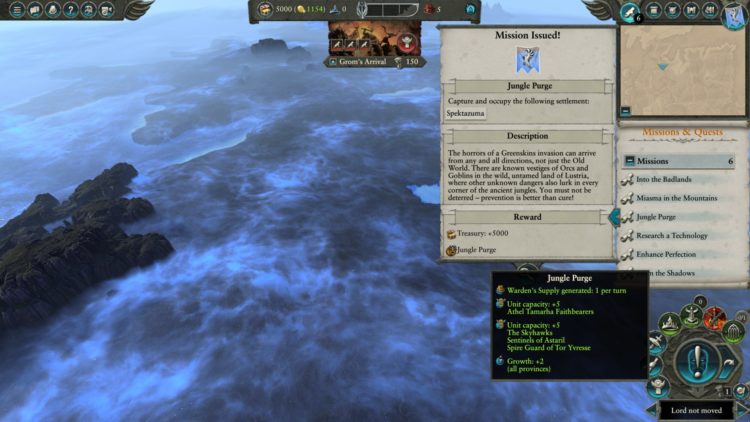 Note: While you’re basking under the Nehekharan sun, don’t forget to confederate with Prince Imrik if his faction’s still around. He’s near Karag Orrud anyway.

The biggest downside when playing as Eltharion the Grim in Total War: Warhammer II, as mentioned in a recent feature, is that there’s very little going on, not unless you want to push your luck and head off to countless squabbles. For the most part, you’ll only need to grab the important settlements, obtain the buffs/warden’s supplies, upgrade Athel Tamarha, amass a lot of gold to recruit high-tier units, and then press that magic button to fight Grom the Paunch.

Similarly, once you’ve obtained all the Athel Tamarha upgrades, there’s no use for the excess warden’s supplies. The feature itself feels very lacking and I’d prefer that you could use extra ones for Mistwalker or influence boosts. In the end, Eltharion wouldn’t be doing a lot of “Warden” stuff as it’s mostly just the “Waiting” in Tor Yvresse. 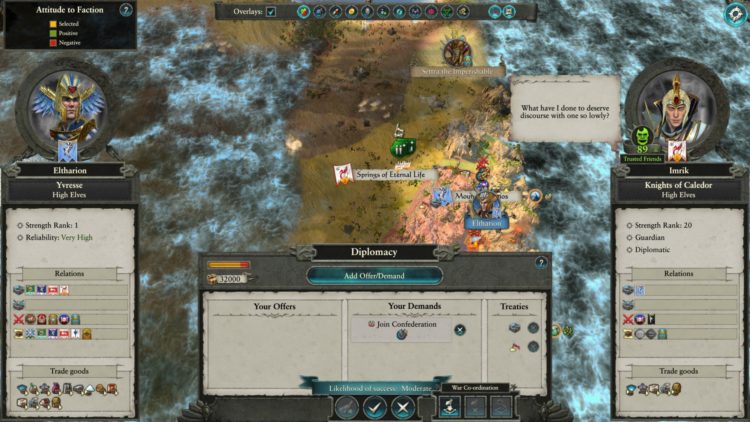 The final battle: The Siege of Tor Yvresse

Many turns later, you should have all the unique items you need, all of Athel Tamarha’s upgrades, and a top-notch army. It’s time to press that magic button to fight Grom.

Once you click on the button, you only have 5 turns to teleport and start the battle. Although the tooltip says that you cannot repeat the action and a loss leads to an end to your campaign, I’ve personally tried to end the battle while deploying my troops since I forgot to equip an item. That led to an automatic defeat, but I was able to play and win it on my next turn. These are the rewards:

Note: We’ve got an in-depth breakdown and more tips for the final battle in our Siege of Tor Yvresse guide. 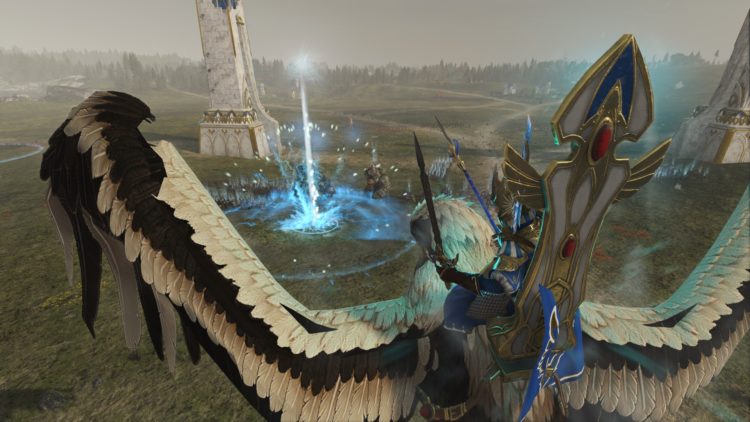 Total War: Warhammer II – The Warden & The Paunch is available on Steam. For more information, check out our guides and features hub.