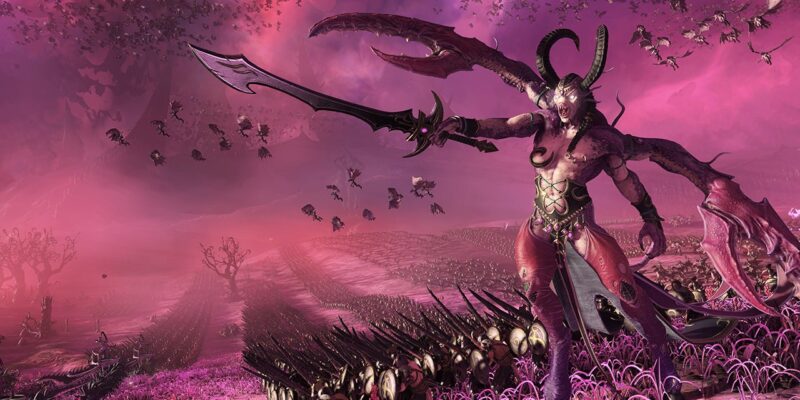 Earlier today, the Total War YouTube channel published yet another trailer for the upcoming Total War: Warhammer III dubbed Enter the World of Slaanesh. Much like other trailers for the game, it doesn’t show off gameplay, but it does allow eager fans to see more of the Slaanesh Chaos faction.

According to a press release, the Slaanesh faction worships a young Chaos God, also named Slaanesh, who dedicates himself “to the pursuit of excess, gratification, hedonism, pain and perfection at the expense of any other soul.” N’Kari, the Slaanesh Legendary Lord who also goes by the name Arch-Tempter, leads this faction, and he “scours the immortal and mortal realms to experience the ultimate sensation and taste ecstasy in its purest form.”

The press release describes N’Kari as “an extremely fast and vicious Exalted Daemon that excels at hunting isolated enemy characters and units.” He boasts a “unique passive ability” called Harvester of Souls, which restores his health once an enemy unit falls. Additionally, he benefits from having the Willing Prey ability, which “significantly reduces enemy melee defen[s]e and attack, leaving them vulnerable to a quick and agoni[z]ing death.” As for the Slaanesh faction itself, it consists of Daemons who possess “unparalleled speed and armour-piercing capabilities.” These vicious creatures “look to sow discontent among the enemy ranks through hit and run tactics, before isolating units and dealing a quick final blow.” The faction can collect “battle currency by killing routing units” and spend that currency on abilities that accentuate playstyles.

Those who have closely followed the news surrounding Total War: Warhammer III will likely get a kick out of this new Slaanesh trailer, especially since it comes relatively close to the game’s official release. Once the game comes out on February 17, 2022, players will get plenty of opportunities to appreciate the Slaanesh faction and all its intricacies.