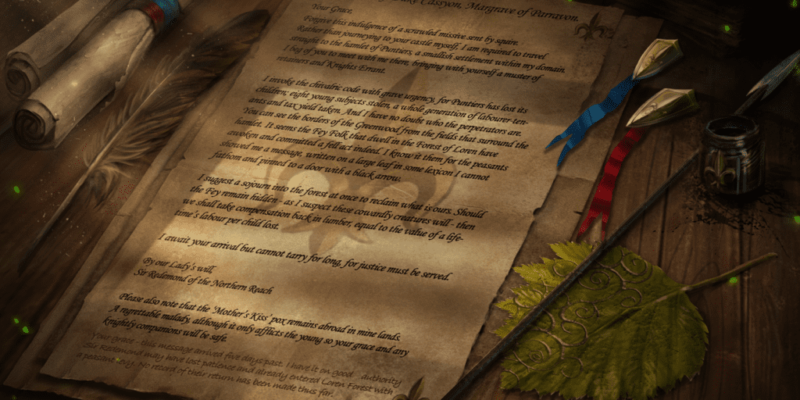 If all the previous references weren’t already enough evidence, today’s release of a new Total War: Warhammer teaser letter pretty much confirms the upcoming Wood Elf DLC. It’s framed as a Bretonnian nobleman irritated that some of his peasant children have been whisked away into the woods.

References to Fey Folk from Loren, a black arrow, and enigmatic text written on a leaf are all the clues you need to say that, yes, this is a Wood Elf thing. Either that or the Skaven are getting really good at framing other races for their nefarious activities.

Should this DLC follow the usual teaser-to-trailer-to-release patterns for Total War: Warhammer, then expect a trailer in a day or so (maybe earlier if it leaks) and a Thursday release date of either 24 November or 1 December. Probably the latter, since that would avoid Thanksgiving. Update 17 Nov: See the announcement link below, it’s 8 December.

Here’s the text of the letter, for those who don’t want to struggle to read Bretonnian scrawls.

Forgive this indulgence of a scrawled missive sent by squire. Rather than journeying to your castle myself, I am required to travel straight to the hamlet of Puntiers, a smallish settlement within my domain. I beg of you to meet with me there, bringing with yourself a muster of retainers and Knights Errant.

I invoke the chivalric code with grave urgency, for Puntiers has lost its children; eight young subjects stolen, a whole generation of labourer-tenants and tax yield taken. And I have no doubt who the perpetrators are. You can see the borders of the Greenwood from the fields that surround the hamlet. It seems the Fey Folk that dwell in the Forest of Loren have awoken and committed a fell act indeed. I know it them for the peasants showed me a message, written on a large leaf in some lexicon I cannot fathom and pinned to a door with a black arrow.

I suggest a sojourn into the forest at once to reclaim what is ours. Should the Fey remain hidden-as I suspect these cowardly creatures will-then we shall take compensation back in lumber, equal to the value of a life time’s labour per child lost.

I await your arrival but cannot tarry for long, for justice must be served.

By our Lady’s will,

Sir Redemond of the Northern Reach.

Please also note that the ‘Mother’s Kiss’ pox remains abroad in mine lands. A regrettable malady, although it only affects the young so your grace and any knightly companions will be safe.

Your grace-this message arrived five days past. I have it on good authority Sir Redemond may have lost patience and already entered Loren Forest with a peasant levy. No record of the return has been made thus far.