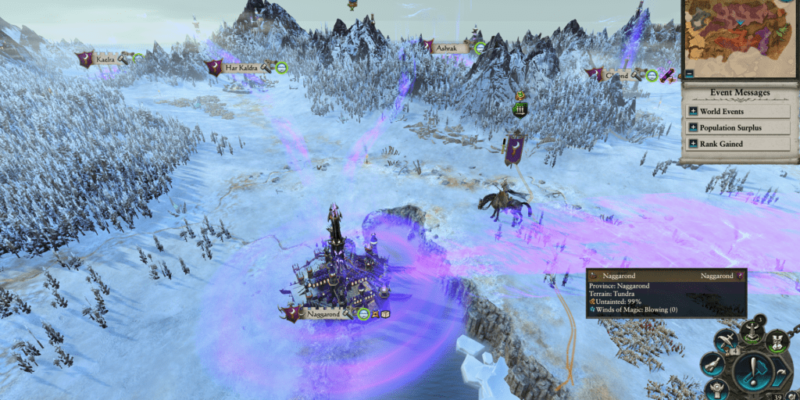 Some pretty hefty clues about which settlements will be included in the Total War: Warhammer ‘Mortal Empires’ campaign have been discovered. As a reminder, Mortal Empires is the name Creative Assembly have given to the upcoming ‘combined’ campaign that will link (most of) the maps from Warhammer and its new sequel. You can read more about it here.

The studio have already confirmed that it will be 295 settlements in size. They’ve also said that parts of the two maps will have to be changed, re-shaped, or cut to make them fit together. Thanks to some datamining work done by Reddit user ‘Leylos_’, a list of settlements that look like they’ll comprise Mortal Empires has been compiled.

In the file-names listed, the first part (ie; ‘eastern_badlands’) refers to the province, and the second (‘karak_eight_peaks’) confirms the settlement. This information, which, while not official, seems consistent with what Creative Assembly have said so far about the make-up of the Mortal Empires campaign.

The Old World campaign has nothing removed, but gains Skavenblight (which may mean Queek gets a new starting position). Lahmia, a city strongly associated with the Undead and Queen Neferata, will be appearing in the Devils Backbone province. According to further analysis by the dataminer, Naggaroth and Ulthuan will be condensed (indeed, the High Elves lose all of their colonies, so Teclis will need a new starting position), and both the South Lands and Lustria have southern portions removed. Albion is gone too.

An official release date for Mortal Empires has not yet been given. Various Creative Assembly representatives have put it “a few weeks” or “less than two months” (pretty much the same thing) after last week’s launch of Total War: Warhammer 2. In order to play the combined campaign, players will need to own both Total War: Warhammer and Total War: Warhammer 2 (the main games, not DLC). It has also been suggested that only the sequel needs to actually be installed.

By Mike Straw15 mins ago
Hardware