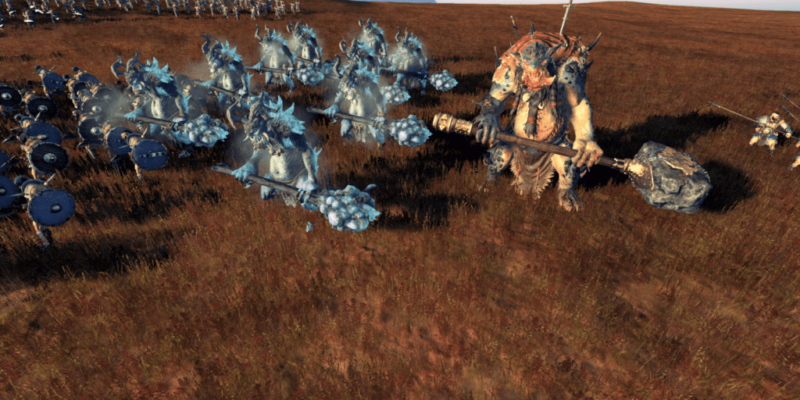 Creative Assembly’s approach to faction design has got bolder throughout Total War: Warhammer’s lifespan, and the upcoming (10 August) Norsca add-on continues that tradition. As the new wild Northmen in town, their more inventive raiding rather overshadows poor old Chaos; much as the Beastmen’s mechanics refined the ‘Horde army’ system last year.

If you’ve ever gazed enviously at Varg and Skaeling forces sweeping down from the coast and waltzing across the realm, now is your chance to play that type of army. And to create rosters with more exotic inclusions like Mammoths and Skin Wolves, rather than 300 units of Marauder Horsemen (although you can do that too, if you really must). 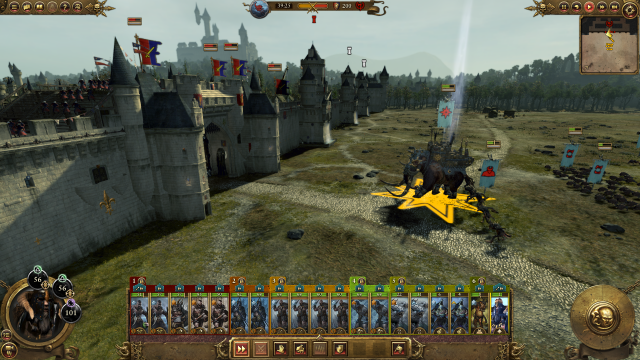 Sir, I have a very angry, hairy parcel to deliver. Sir? I know you’re in there.

The Total War: Warhammer team apparently has the blessing of Games Workshop to delve deep into the archives in order to expand lesser known rosters like Norsca. As far as I can tell they haven’t had tabletop representation since the 1980s, so this is the first playable faction in the game from outside the established 6-8th Edition races. Norsca’s Total War line-up is an intriguing one for Warhammer historians, featuring fringe creatures like the aforementioned Skin Wolves, and the oft-forgotten Fimir (beaked Cyclops-like monsters last seen in the mid-80s and titles like Heroquest).

The faction core is ferocious (though generally poorly armoured) warriors, short-range ‘hunter’ themed missile troops, and an impressive range of monstrous friends. Special Norscan versions of hounds (Ice Wolves) and trolls (Ice Trolls) can inflict a ‘Frostbite’ status effect, slowing foes and keeping them pinned in place for a battering.

Norsca are also the first paid DLC faction to come without a separate mini-campaign. That’s consistent with Creative Assembly’s stated policy towards future expansions, which will focus more on additional Legendary Lords and larger rosters. Norsca’s two Lords (skull fashion afficionado Wulfrik and three-time vomiting world champion Throgg) keep their raiding and ravaging strictly to the main campaign, and the DLC is priced accordingly at $10. Plenty of players will probably get it for free though, as it’s a novel bonus for anybody who buys Warhammer 2 between now and one week after release.

The faction are not a horde like Beastmen or Chaos, but they do sustain themselves in much the same way through persistent sacking of rich settlements. Though Norscan provinces can be settled, and coastal towns can be taken as outposts, income from building chains is severely limited. The faction’s design pushes you to continuous raiding (as it should), both to build and retain forces, and in order to seek favour with Norsca’s interpretations of the Chaos god quartet. 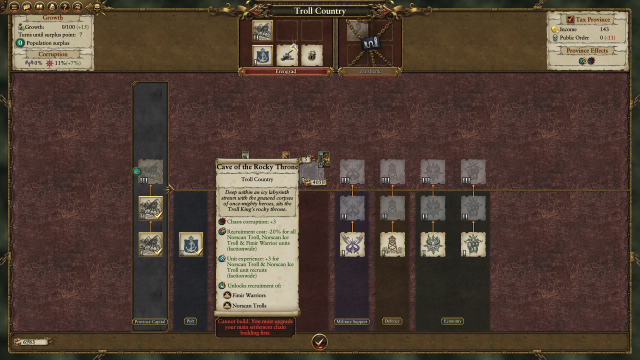 A special building for a very special boy. Well … troll.

Norsca don’t have distinct short and long term campaign victories like other Total War: Warhammer factions. Instead, Wulfrik and Throgg’s overall objective is to raze enough towns and toss up enough totems in their place to earn the attention (and attendant bonuses) of one of the four gods. Plus destroy their immediate rival (whomever you didn’t choose as Lord), The Empire and Bretonnia for good measure.

The regular Chaos invasion is deferred until you find favour with a god, and defeat all of their champions. Considering the last battle in this chain is pretty tough and worth putting off until you have a seasoned force, you may, like me, find yourself triggering the invasion and finishing the campaign in one fell swoop. That felt a little odd, though to be honest there wasn’t much left at that point for Chaos to stomp over.

Furthering the links with Chaos, Marauder Chieftains (your standard generals) get to pick their alignment in the ‘yellow’ skill line. That’s a neat touch, and bodes well for if (probably when; though it may well be Warhammer 3) Creative Assembly portray Chaos in all of their quad-factioned glory. 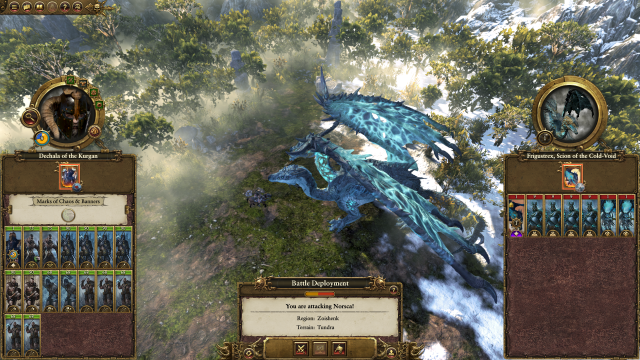 Why do none of my building chains provide special mittens?

Norsca have some cultural pastimes of their own, too. Namely hunting obscenely dangerous creatures to sacrifice to the gods. Unlocked through the tech tree, these hunts are essentially Total War: Warhammer quest chains with a unique monster-themed battle at the end. You get to take on such beasts as snow-storm conjuring Frost Wyrms and twin Cygors (plus their friends), and reap some quality magical rewards. The Frost Wyrm scale item proved particularly effective during sieges, where it could freeze literal hundreds of soldiers beneath the shattered doorways.

The hunts suffer slightly from the general quest chain problem that only the end point can be teleported to, so you’ll sometimes have to go pretty far afield just to kick off the events. Chances are you’ll wind up in Middenheim no matter what, but a trip to Karak Azul requires some serious forethought.

Indeed, the only significant issues with this Norsca expansion are the baked-in ones that haven’t been fully addressed in Total War: Warhammer. Aspects like overly timid and somewhat robotic campaign AI are still present, but little else will undermine the joy of spreading carnage across the Old World.

It’s worth mentioning that this DLC will be released in conjunction with a free update that does deal with a few other longer term complaints. Azhag is getting a proper set of starting units (Boar Boy Big ‘Uns, Trolls), and both he and Gelt have rejigged skill trees. The neglected souls of Chaos have a slight rework too; their higher tier units don’t suffer attrition from infighting, and they now take Norscan regions as vassals. Welcome changes, all. 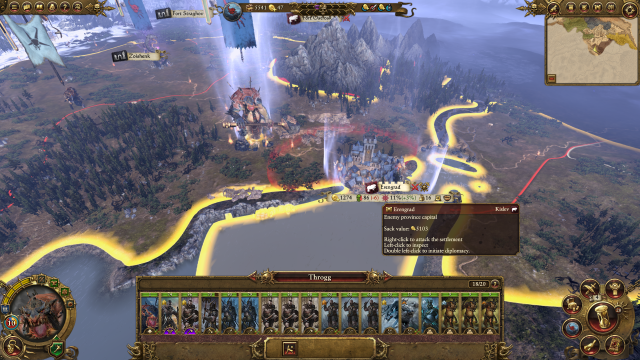 Erengrad’s real estate market is in for a shock.

Norsca offer a roster list that’s both suitably varied and steeped in older Warhammer lore. The latter aspect gave me more interest in the faction than I’d previously expected, and it turns out there’s really no battlefield problem that a couple of Mammoths can’t solve. They’re a fine interpretation of a hunting and raiding faction, with a great side-line in monstrous allies, without merely being a horde re-tread. AI-permitting, the Marauders from the North should now be a more novel threat when you’re playing a faction like Empire or Bretonnia too.

Their overall objectives may not be radically different from the equally pillage-happy Chaos and Beastmen, but an engaging roster, a smart twist on quests in the form of beast hunts, and a pair of Lords with a lot of thematic character mean Norsca and Wintertooth still stand out. This may prove to be the final major addition to the original Total War: Warhammer; if so, it’s a sign-off with real factional flair.

Norsca are another faction based around raiding and pillaging, but their unique hunting mechanics and a roster that delves deep into Warhammer history make them a distinct addition to the game.