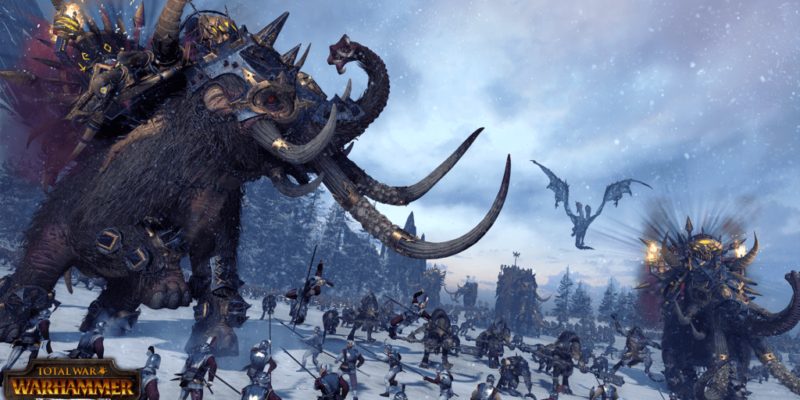 The warriors of Norsca are marching from the cold north on 10 August, bringing a new faction to Total War: Warhammer. Creative Assembly have released loads of details (mechanics, unit roster, the whole deal) about them today, so let’s get to it.

First of all, anybody who buys Total War: Warhammer 2 between now and one week after its 28 September launch will get Norsca as a freebie. They’re not in the sequel, so you need to own the first game to make the most of that offer. Ultimately, Creative Assembly plan to merge both games into one mega-map; at which point you’ll be able to bring Norsca over to the ‘New World’ areas (again, if you own both titles).

Those who aren’t interested in the sequel and just want to buy Norsca for Total War: Warhammer as a one-off DLC can do so too. It’s $10 (or $9 when bought ahead of release). If you still have questions about purchasing, this FAQ should help.

Alright, that’s all the buying options out of the way. Now on to how Norsca will actually play. They’re an expansion of the Chaos-tinged Viking lads (Varg, Skaeling, etc) who live at the top of the map and constantly send raiding parties to ruin your day. Now you get to be the one ruining everybody’s day. Hurrah.

A little like the Beastmen, Norsca’s playstyle will be based around raiding and sacking. Unlike the Beasties, they’re not a Horde faction. Norsca has northern settlements and will also be able to create coastal outposts for resupplying purposes. The roster discussion video mentioned that rival faction capitals can be settled, and will hold unique rewards.

Norsca personify the four dark gods as the Hound, Serpent, Crow, and Eagle. Every time you raze a settlement in Total War: Warhammer, you’ll be able to raise a monolith to one of these gods. Each god will bestow upgrades, depending on how many totems are erected. The path to victory involves pledging allegiance to one of the four, at which point the other three will dispatch champions to fight you; culminating in a final battle for supremacy.

The Norsca are hunters, so when Monster Hunting is unlocked in their tech tree they can embark on quests to slay and subjugate mighty beasts. Victory will earn either legendary trophies to equip on your characters, or the monster itself becoming a recruitment option for your army.

In battle itself, Norsca troops have Rage and Berserk traits. Both sound like they operate in a similar way. One of three stats (melee attack, leadership, damage) will increase the longer a unit remains in combat. Berserk will tick up faster than Rage. Many of the Norsca units in Total War: Warhammer will also have a Frostbite attack, which (kind of like poison) will slow opponents down and keep them in place for an easier kill.

To get the absolutely full picture on the upcoming new faction and its Legendary Lords Wulfrik and Throgg, watch the roster reveal, read the Steam page, and look at the text version of the unit roster (which I’ve also repeated and slightly reformatted below). Cinematic trailer and screenshots follow beneath that.

Wulfrik is a relentless executioner. He roams land and sea, an awe-inspiring figure draped with the skulls of his conquests. He has slain dragons and kings, highborn lords and beasts of legend. None may refuse the challenge he delivers – and in their own tongue, no less.

Wulfrik is a powerful leader and duellist with unique skills, quest-chains and legendary items. He has the Siege Attacker attribute, enabling him to ignore the requirement for siege engines or siege weapons before attacking walled settlements. All Mammoth units in his army gain bonus Melee Attack, all Marauder units enjoy reduced Upkeep Costs, and every unit in his retinue causes Fear.

Wulfrik also has a personal combat ability called Seafang, named after his fabled ship; a powerful and far-reaching wind attack. Carefully placed, it can stagger and slay numerous foes. In battle, his Hunter of Champions skill enables him to pin enemy characters in place while he fights them.

Trolls are widely known not just for their physical power, but also their striking lack of intelligence. It is this that sets Throgg apart from the rest of his kind, for he is gifted with a rare intelligence for his grotesque kind. Behind his snaggle-toothed visage lies a ruthless cunning that Throgg employs to bring the bitter chill of the north to the lands of man.

If Throgg captures the settlement of Eringrad in Troll Country, he may build a unique building there – the Cave of the Rocky Throne – which grants buffs to Troll units factionwide. Throgg also has a uniquely Trollish magic missile attack called Copious Vomit

Marauder Chieftain. Mounts: Chaos Steed, Marauder Chariot, War Mammoth (can be customised to follow any of the four gods)