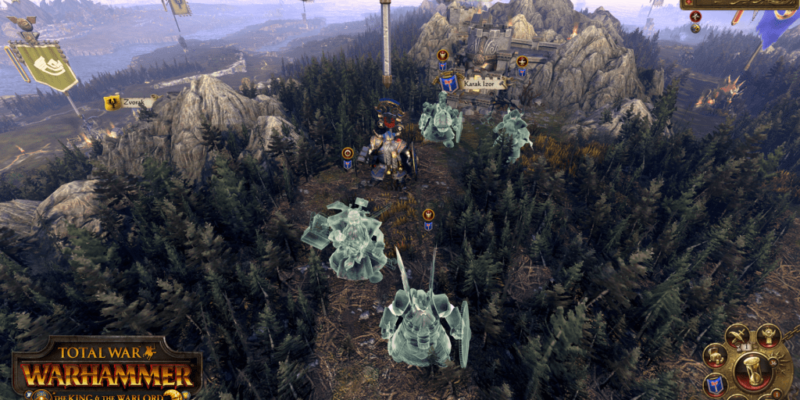 Legendary Dwarf Lord Belegar Ironhammer is the ‘King’ part of Total War: Warhammer’s upcoming King and the Warlord DLC, and the stoic chap’s abilities have been outlined today. He can unlock bonus melee against Greenskins, and comes with some Dwarf ghost buddies.

These ‘Revered Ancestors’ mean Belegar starts with four hero units. Two thanes, a master engineer, and a runesmith. They each have the ‘Ethereal’ trait (and all that entails in Total War: Warhammer) and, according to this Reddit thread are all separate units that can be moved to other armies if desired. Basically, they operate like standard (albeit ghostly) heroes.

Belegar starts off the single player campaign in Karak Izor (the new Clan Angrund faction have replaced Karak Izor), and has earlier access than most to the Dwarf Ranger building chain. He can unlock the skill ‘Orcsbane’, giving a melee boost to his entire army when fighting Greenskins. Belegar’s personal quests will be for the Shield of Defiance and the Hammer of Angrund.

In addition, if Belegar Ironhammer holds Karak Eight Peaks, he can unlock a building chain for Ancestral Rune Weapons. The King and the Warlord DLC will be released for Total War: Warhammer on 20 October. 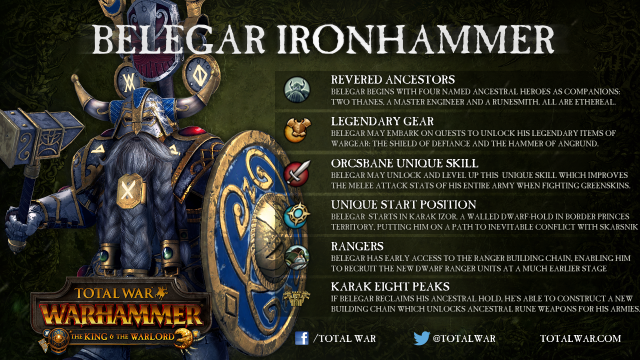