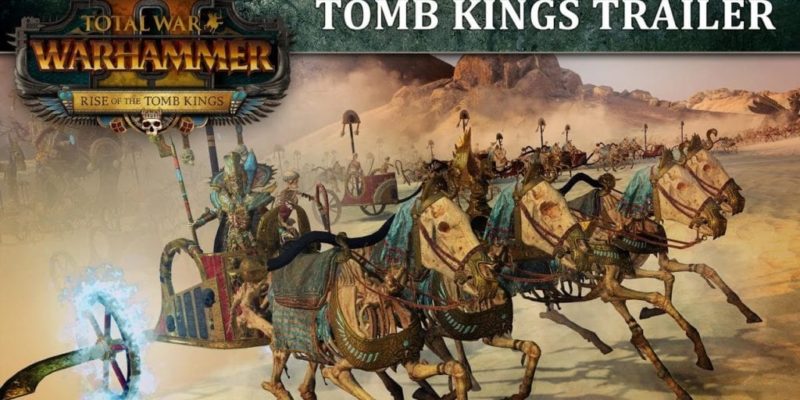 Total War: Warhammer 2 will be getting new DLC early next year called Rise of the Tomb Kings.

Across the arid wastes of once-proud Nehekhara, legions of skeletal warriors and vast, terrifying constructs rise from the sands to serve their ageless masters. The Tomb Kings have awoken – to rebuild their glorious empire anew!

New to both the Eye of the Vortex campaign and Mortal Empires in Total War: Warhammer 2,  the Rise of the Tomb Kings Campaign Pack introduces an entirely fresh campaign experience with a raft of race-specific gameplay mechanics, victory objectives, and lashings of authentic lore. In battle, the Tomb Kings field countless skeletal units, supported by towering stone constructs such as the Tomb Scorpion, Necrosphinx and the colossal Hierotitan.

In response to player feedback, Rise of the Tomb Kings does not contain a supplementary story campaign, but instead 2 additional Legendary Lords for a total of four, with their own skills, traits, quest-chains, legendary wargear and situational challenges. Players may embark on Tomb Kings campaigns as Settra the Imperishable, Khalida, Khatep and Nagash’s former lieutenant, the malignant Arkhan the Black.

The DLC costs £12.49 on Steam where there are shots and there is also this trailer. It’s out on 23 January.

EA is Using The Sims 4: Cats and Dogs to Promote Pet Adoption

PUBG’s leaderboards will be reset tonight ready for 1.0