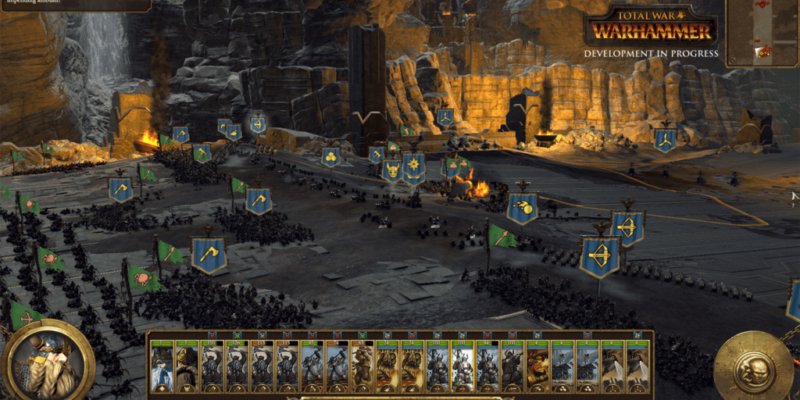 Creative Assembly have put together another (pre-alpha) video from Total War: Warhammer, once again showing some early ‘quest’ battle gameplay. In this particular tussle, High King Thorgrim Grudgebearer is fending off an Ambush at the Thundering Falls.

The 16 minute long battle gives a good look at some of the dwarf units – troll-tackling Slayers, fire-projecting Irondrakes, Thunderers and the like – as well as some insight into the spider-based cavalry and Doomdiver artillery on the goblin side.

Since it’s a quest battle there’s a little more scripting involved than during a typical campaign clash. The goblins are affecting an ambush, so while there is a ‘main force’ standing opposite to the dwarf ranks, they also variously pour out of the tunnelled sides of the subterranean battlefield. Total War: Warhammer sounds as though it’ll have more of these ‘hand-crafted’ type battles.

There’s a brief look too at some new UI customisation options. In Warhammer it’ll be possible to toggle what, exactly, shows as an overlay when the space bar is held down (commander auras, ranged weapon limits and so on). It also looks like you’ll be able to leave certain things on permanent show (or remove them) if you wish.

Another interesting aside noted that Thorgrim Grudgebearer was using a magic item he’d picked up in an earlier battle. So it sounds like there’ll be some degree of customisation and decisions relating to how you equip your named generals.

No More Five Nights at Freddy’s, Only FNAF World