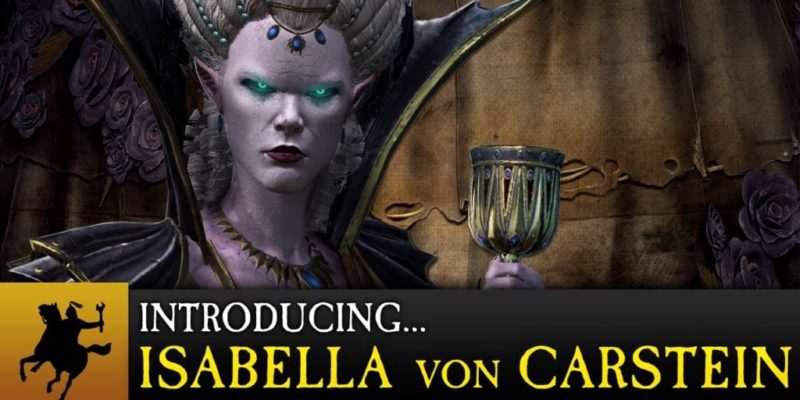 Isabella von Carstein, Vlad’s partner in blood crimes, will be coming to Total War: Warhammer as another Legendary Lord option for the Vampire Counts. A mere selfish noble in life, she received the blood kiss from Vlad von Carstein (happy Valentine’s Day everybody) and became a full on vampire.

Here’s where things get slightly confusing. Isabella von Carstein will be added to Total War: Warhammer on 28 February (with the Bretonnians) if Total War: Warhammer wins the ongoing ‘Make War Not Love‘ SEGA contest promotion thingie. If the game doesn’t win that, then, well, you’d have to imagine she’ll still appear since Creative Assembly have already put the work in; but she’d perhaps be paid DLC instead of free.

That’s speculation on my part, because I don’t know what would happen and Creative Assembly don’t seem to have mentioned that possibility. Ultimately, in some form or another, Isabella and her blood chalice will be in the game. Probably on 28 February.