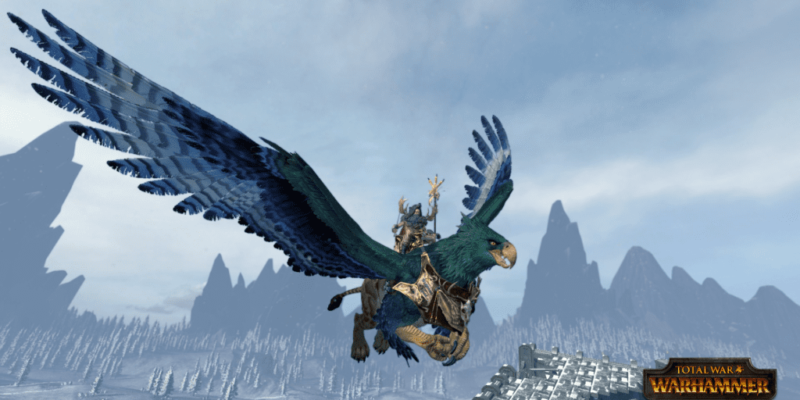 Whether you have any intention of picking up the Call of the Beastmen DLC on Thursday or not, Total War: Warhammer will be getting Update 2 on the same day. Creative Assembly have released the accompanying patch notes, so you can pick over the changes and balance tweaks ahead of time.

As with the previous patch, Update 2 is a pretty extensive list of fixes and changes. It would be futile to try to summarise them all here, but a couple of things stood out. Magic looks like its had a bit of an overhaul, although specifics are a little bit vague in some of the notes, things like “Rebalanced several upgraded spells that could potentially kill Lords in one or two casts” are clear. No more Lord-sniping in Total War: Warhammer multiplayer, perhaps?

Artillery looks like its been buffed across the board too, with longer ranges and increased frequency of fire. The goblin doom-diver costs more to recruit now, however.

In one particularly great, fiction-appropriate change, “Sigvald will no longer bleed when the Blood Effects are enabled”. He has magic armour that prevents all dirt, so that’s exactly as it should be.

Sigvald will no longer bleed when the Blood Effects are enabled

When Chaos Warriors respawn, they now correctly respawn in a state of war against with the same factions as their vassals

The Chaos Invasion and Doom Tides events can now no longer occur on the same turn, which previously prevented Archaon from entering play

The Chaos Invasion event will now not be shown repeatedly

When AI-controlled Chaos Invasion event occurs, Norscan factions will no longer war among themselves

Fixed an issue where seams were showing on Chaos Spawn

When Azhag dons the Crown Of Sorcery, it cannot be removed!

Steam from Gyrocopters will no longer change colour during Subterranean Battles

Blood Knights no longer clip through their mounts

Battle tooltips will no longer flicker when refreshing abilities are being applied, for example Chaos Warhound’s Poison! debuff

Tweaked effects of upgraded version of Transmutation of Lead

Updated Burial Mound of Grudsnik map to fix an issue with inaccessible terrain.

Snow effects will now play at the maximum camera height on snowy battlefields.

Siege battles at Dietershafen will no longer display ‘The Threat from the North’ on the pre-battle loading screen.

Siege equipment now has camera collision across all factions

Fixed an issue that would cause the Autoresolver to always treat the player as the attacker in Battles, even if they are the defender

Achievement ‘Jack of All Trades, Master of Some’ now triggers correctly

‘XP Gained’ messages should no longer appear for max-level characters

Improved the Campaign AI to make it less inclined to send armies an extremely long distance away to attack hostile hordes.

Unit abilities, spells and items can now be added/subtracted for lords and heroes in custom and multiplayer battles. This allows the player to experience more expansive key characters for high micro-management, skew their role in battle by selecting certain complimentary actives/passives or create more lean characters with low micro-management for alternative army-wide tactics.

Each character has a base cost, which includes inherent attributes, but not abilities, spell and items.

When an ability, spell or item is added, the cost of the character increases

There is a slight decay in cost of abilities when added, taking into account that the player can only cast/interact with one ability at a time.

Legendary lords are given relevant quest battle reward items, allowing the player to experience a taste of what can be won in their campaign play-through.

Multiplayer Battles will no longer display a message saying the AI is taking control if the Battle ends due to a player leaving.

A variety of isolated crash instances have been fixed

Please note our DX12 implementation is still in beta, and investigations with issues are ongoing

Fixed porthole for lord of change

Call of the Beastmen theme added

Water added to parchment maps for all campaigns

Chaos Marauder units are now using all their VO

Fixed a bug where Vampire lords were not playing VO

Fixed an issue with the Game Guide that could occur when the window was resized to a very small window.

Updated the Game Guide and Help Pages to fix some links which were not displaying correctly.

Made multiple corrections to the Game Guide

Added money bag icons to make in-game purchasing easier. Buy it all, you know you want to!

Maximum of 4 Heroes in multiplayer battles

Rebalance of winds of magic costs

Rebalance of combat potential for unit abilities and spells

Rebalance of effect area of some unit abilities and spells

– Firing arc fix allows for fire from behind infantry line

– Decreased Bonus versus large
General of the Empire

– Decreased Health whilst on Griffon

– All mount options have the Encourage ability