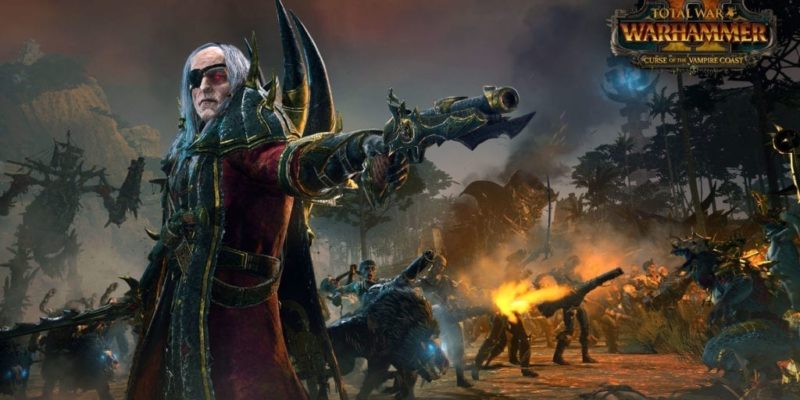 Arrr, mateys! It’s ’bout time we set sail after an announcement from Creative Assembly regarding their latest DLC for Total War: Warhammer II. It’s none other than the Vampire Coast led by Luthor Harkon! And what a plunderful surprise it is. Check out the trailer for the DLC, aptly titled Curse of the Vampire Coast, right below:

Goodness me! I’m shivering me timbers! We had a few hints of this in the previous weeks. The first was when Creative Assembly mentioned: “X marks the spot” on October 4, 2018. Then we had one yesterday when Grace_CA, a community manager, posted a cryptic letter which everyone guessed correctly referenced the bloodthirsty, blood-drinking pirates. Now here we are.

For those unaware, the Vampire Coast faction is made up of undead pirates that roam the high seas and the shores of Lustria. They are led by Arch-Commodore Luthor Harkon. What makes them fairly unique is that they do not make up the 16 main factions in Warhammer Fantasy Battles. They don’t have a Games Workshop army book. Instead, they briefly appeared in the White Dwarf magazine and a campaign book (Conquest of the New World) over a decade ago. Since then they have captured the imagination of many a hobbyist and privateer. There’s one such story from Rob Hawkins who used to work with Games Workshop when they tried to come up with ideas for the “Zombie Pirates of the Vampire Coast” army.

Here’s where it gets even more interesting. Remember the Norsca faction in Total War: Warhammer? Many of the units aren’t from Games Workshop. The Skin Wolves and Fimir Warriors are Forge World units. Creative Assembly used both official and unofficial sources to fully flesh out their army list. We’re seeing that with the Curse of the Vampire Coast DLC for Total War: Warhammer II as well. Again, they’re not part of the 16 core factions, but Creative Assembly is still putting them in the game. 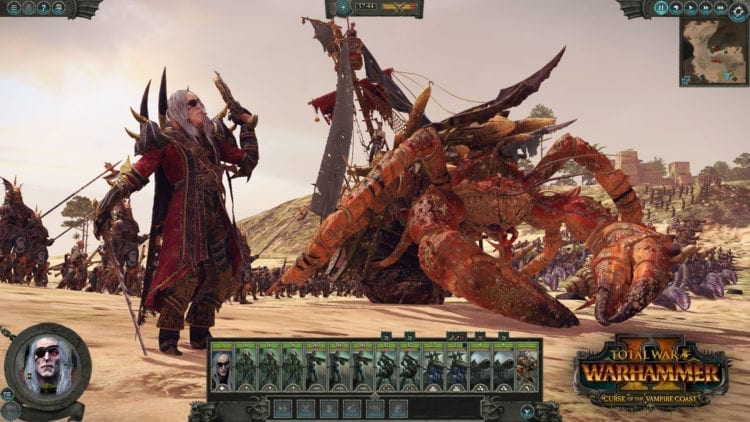 It looks like the dreaded fleet captains and pirates will be fairly unique. The DLC will actually have four Legendary Lords, with Luthor Harkon being the first one revealed. They’ll be sailing on unique ships which function like horde buildings. Likewise, they can capture port settlements and turn them into Pirate Coves. Their main goal during the campaign is to defeat rival pirates to obtain all three shanties or verses. This will empower the Star-Metal Harpoon, which will allow you to fight and dominate the great Merwyrm — Amanar.

So yes, it’s far from the regular affairs that we’ve seen in the Eye of Vortex and Mortal Empires campaigns. In fact, factions in Warhammer II tend to trump their counterparts in the original game in terms of uniqueness, making the vanilla game truly vanilla in that regard.

There’s still more news to discover in the coming weeks. For instance, we don’t know who the remaining Legendary Lords will be. Walach Harkon, perhaps? We’ve also yet to see the full army roster, although judging by the trailer we know which units will make it. The Queen Bess is there (hell yeah!) and there’s a Necrofex Colossus (a Forge World unit)!

For those who aren’t so excited about playing as a pirate, the Vampire Coast will still be part of the game as an AI-controlled faction. Likewise, there will be another Legendary Lord that will be revealed in due time — this one is a freebie or a free-LC. If it’s a naval-based DLC, then it’s gotta be the Krakenlord, Lokhir Fellheart of the Dark Elves.

While the game will still not have full-fledged naval battles, all players will get to see two new battle types: island battles and Black Ark battles. The former will have entire land armies facing off in archipelagos and beaches. The latter will have your forces combat opponents in the crags and cliffs of an actual Dark Elf Black Ark. Also, the Vampire Counts from the first Total War: Warhammer game will get a rework.

Well, that’s enough nerding out for today. The Curse of the Vampire Coast DLC releases on November 8. You can pre-order it on Steam. As usual, PC Invasion will keep you landlubbers updated with more Total War: Warhammer news.