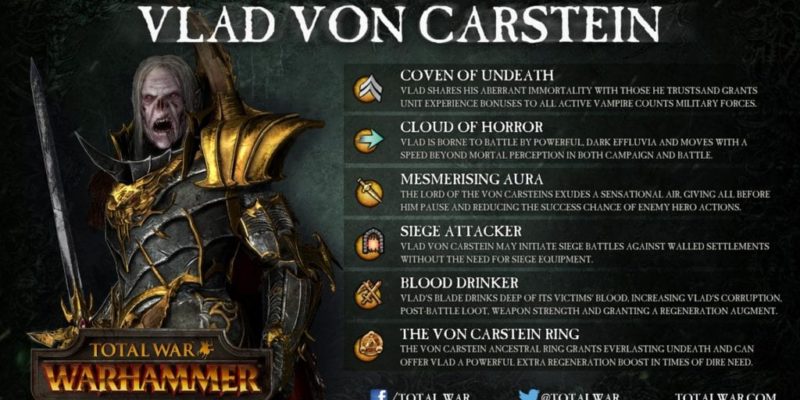 When the Grim & the Grave DLC launches on 1 September for Total War: Warhammer, there will also be a free Legendary Lord added to the Vampire Counts. While Volkmar and Helman Ghorst will be part of the paid add-on, the ever-difficult-to-kill Vlad von Carstein will be made available for all players.

In the same manner as Volkmar the other day, Vlad has got an image (below) summarising his battle abilities. ‘Coven of Undeath’ gives an xp buff to all Vampire Count forces, ‘Cloud of Horror’ gives him extra movement on both campaign and battle maps, ‘Mesmerising Aura’ reduces the success of enemy agent actions, and ‘Siege Attacker’ means he can rock up at walled settlements and launch attacks without building special equipment.

Vlad von Carstein also has a pair of regenerative-based skills; ‘Blood Drinker’ boosts corruption, weapon strength, post-battle loot, and gives some regeneration, while ‘The von Carstein Ring’ is a “powerful regenerative boost in times of dire need”. In the Grim & the Grave announcement press release, it was also implied that units in his army would all have Vanguard Deployment in the main Total War: Warhammer campaign.

Meanwhile, the necromancer Helman Ghorst has got an abilities run-down image too. ‘Liber Noctis’ gives him a boost to the winds of magic recharge rate, ‘The Brothers Ghorst Corpse Cart’ gives armour and melee boosts, ‘Forbidden Scripture’ speeds up technology research, and ‘Morbid Reunion’ means he can raise the dead at reduced dark magic cost. In addition, ‘Master of the Dead’ is a passive ability that replenishes hitpoints to those undead around him, and ‘Leading From the Front’ improves melee defence of Corpse Carts and Mortis Engines (both new units in Grim & the Grave). 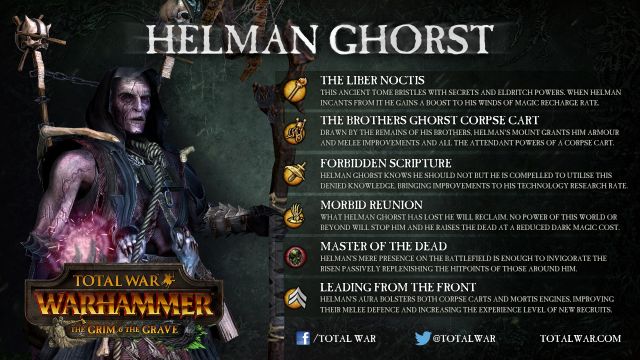