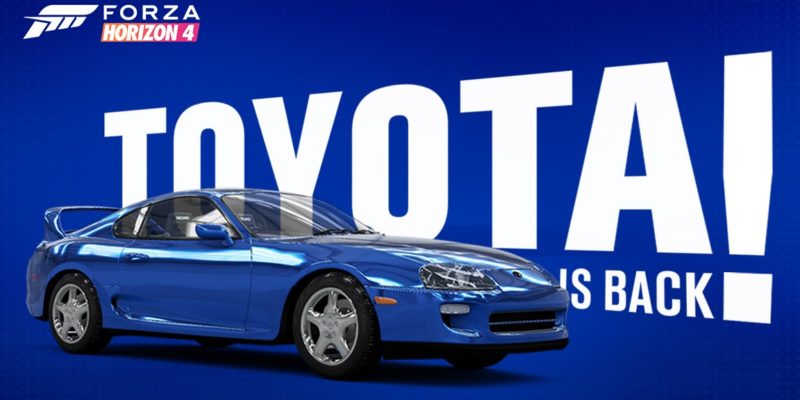 In the one-year that Forza Horizon 4 has been on the market, it has prided itself on having a massive roster of over 400+ vehicles spanning a wide variety of generations and manufacturers. Yet, there was one distinct manufacturer missing from its lineup: the Japanese giant of Toyota.

Although Toyota vehicles have appeared in previous Forza titles, including FH4’s direct predecessor Forza Horizon 3 and its relative Forza Motorsport 7, but it did not make a return for Playground Games’ latest outing. That is, until now.

Announced during the Forza Horizon 4 Update 16 livestream, Playground Games proudly confirmed that Toyota is making a return to the world of Horizon with the addition of the Toyota Supra to Forza Horizon 4. It will speed its way into the game on December 12, 2019, as part of the Series 17 update.

To be specific, the first announced model that will be coming to FH4 is the 1998 Toyota Supra RZ. It looks like it will be a nice throwback car that is well suited for road races and drift events.

Forza and Toyota have joined forces once again! It all starts on December 12th when #ForzaHorizon4 players can get behind the wheel of the 1998 Toyota Supra RZ as a part of the Series 17 update. pic.twitter.com/7WhGjIqsys

The announcement was placed right at the very end of the livestream, as a classic “one more thing” moment (starts at the “55:41” mark – has already been selected):

Playground has confirmed that more than the 98′ Supra will be coming into Horizon 4. This vehicle just so happens to be the first one that’s been announced. More announcements will be made as time goes on.

The return of Toyota also includes a return of Lexus vehicles, as Toyota is the parent company of Lexus. This deal will last “for years to come”, so there shouldn’t be any more snags in releases for future Forza titles.